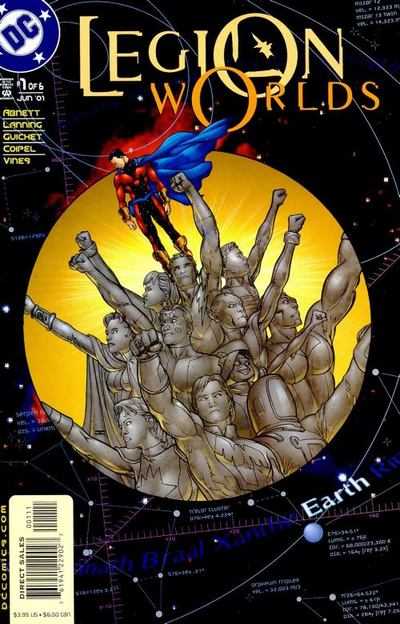 Spoilers (from nineteen years ago)

Dan Abnett and Andy Lanning took over the Legion of Super-Heroes at the very end of the 90s and brought them into the new millennium by first wrecking things.  The Blight invaded and took control of the Earth, trashing it in the process.  After that, a tear opened in reality, and it took the actions of a group of Legionnaires to save things, only they disappeared.  The Legion Lost series of 2000 followed that missing group, and ended with it looking like they were on their way home.

But what was home going to be like?  When we last saw the Earth, it was suffering, and the United Planets was quarantining it.  The stargate network was shut down, the Legion disbanded, and RJ Brande impeached as President of the UP.

I guess that DnA, as Abnett and Lanning are often known, wanted to take some time to explore the new status quo, so between their Legion Lost and the relaunched Legion title, they wrote this six issue series.  Each issue was oversized (and priced), and focused on a single planet, starting with Earth.  I always assumed that part of the reason for this series existing was also to give The Legion artist Olivier Coipel more time to get ahead of his schedule.

I don’t remember a whole lot about these comics.  It’s worth mentioning that this is still the post-Zero Hour reboot version of the Legion, so expectations should be adjusted going in.  I am curious to see what they do with some of these characters (I’m trying to remember how Star Boy ended up in the Starman series around this time).  Let’s see if these are any good.

I really liked this series, and the way in which it focused on individual Legionnaires in a way we hadn’t seen before in the reboot era.  Abnett and Lanning were able to breathe real life into these characters, and used this kaleidoscopic approach to help bring us up to speed on all the things that had happened since the rift incident.

I think the thing I like best about this miniseries is the way in which it kept the emotional payoff of seeing the Lost Legionnaires return away from readers; we keep hearing that they’re back, but we are never given any details of that.

One of my biggest complaints about the reboot is that it ignored the rich stable of worlds and characters the original Legion had to offer.  This time around, they dug into life on some of those planets, spotlighting some of the ways in which they are different from their first incarnation (personally, I think I preferred Winath as a libertine world where everyone just wore loincloths while farming).

Seeing Earth and Xanthu in rough shape was exciting, and I like the way this series set up two threats – the invasion of Robotica and whatever that Mr. Venge guy is clearly up to (unless, of course, those two things are connected).  It’s a little crazy that after the Blight invasion DnA were already back to showing massive alien conflict, but it was also pretty cool.

One thing that made me particularly happy is that DnA brought Timber Wolf back into the Legion.  Alongside Wildfire and Dawnstar, he was one of the characters I missed most in the reboot era.  Granted, they brought him back in my least favourite incarnation – as the werewolf from the Timber Wolf miniseries, but still, it was nice to see him again.

Of course, the best thing about this series is the art, which got to spread itself over a longer than usual page count.  It was great to see artists like Cooke and Dillon work on the Legion (rest in peace to them both), but strange to see Karate Kid look as old as every character Dillon has ever drawn.  I was excited to see artists like Breccia, who come from a different tradition, take on the Legion, and am always happy to revisit artists like Plunkett and Rousseau.

I remember that, by the time this series was over, I was more than ready to dive into a new Legion title, and see how DnA were going to shepherd the team through all of these challenges.  I wanted to know if Rokk was going to put the team together, and if everyone made it back home safely.  Weirdly, I don’t remember anything about The Legion, the title that followed.  I’ve even flipped through the covers and have no memory of those books.  That’s what we’ll look at next time though…

It doesn’t look like this series ever got collected, but it’s worth digging for.