The Autumn chills of October means the time is right to eat lots of small sized candies and watch plenty of cult films on TV. Arrow Video is providing five films on Blu-ray that are go perfect with a handful of candy corn. The Deeper You Dig is nightmarish tale of what happens when a neighbor covers up their accident involving the family down the road. The film hits those uncomfortable notes rather effectively to make you not want to leave the house for weeks. In addition to the movie, you also get the filmmakers’ previous release The Hatred so you can have an Adams Family double feature from the sofa. Mallrats is the movie that established Kevin Smith as more than a one hit wonder in the wake of Clerks. He deals with what it was like to for teens to hang out in a shopping mall in the early ’90s. The movie featured a wonderful cameo from comic book legend Stan Lee years before he’d be popping up in the major Marvel superhero flicks. The film gained a big following on home video and this double disc Blu-ray really will be a thrill to people who eagerly listen to Smith’s podcasts.

Warning From Space was the first Japanese monster movie to be released in color although the people in the USA didn’t see the Japanese cut until now. Aliens arrive on Earth with a message although it turns out one of their own have already touched down and taken a different form. Are we doomed? The Blu-ray has both the recut that played at Drive-Ins back in 1963 and the original cut that hit Japanese theaters in 1956. The Last Starfighter was one of those great films of the ’80s that made going to the arcade look purposeful. When a kid busts the high score on a video game, his life changes when he discover that the next level isn’t a kill screen, but a chance to save the universe. This was a great fantasy for when you were pumping quarters into Defender. Cold Light of Day was a chilling film about an English Serial killer. Dennis Nilsen’s horrific acts get examined in the film that shows what he did to his victims in London back in the early ’80s. The movie didn’t get much of a release in the U.S. at the time. This is a fine way to wrap up the Spooky Season of October.

New on Blu-ray from Arrow Video US

As we officially settle into autumn put on your comfiest, grab a cup of your favorite pumpkin-spiced beverage, and relax with five new Blu-ray releases from Arrow Video.

The releases start heading home on October 6 with the release of The Deeper You Dig. Described by Glenn Kenny of RogerEbert.com as “one of the more striking and effective horror pictures of recent years,” The Deeper You Dig follows a mother, daughter, and stranger as the deal with the aftermath of a roadside accident. The film is a family affair written and directed by husband and wife tandem John Adams and Toby Poser, who also start alongside daughter Zelda. This Limited Edition release also comes with The Hatred, a previously-made feature film by The Adams family, making for a compelling double-bill of original, independent horror.

Would you like a chocolate-covered pretzel? On October 13, Arrow has two new releases, starting with Kevin Smith’s notorious cult classic, Mallrats. The comedy about a pair of recently dumped best friends seeking refuge at their local mall was initially a failure, sputtering at the box office and getting panned by critics. However, the film found a second life on home video, become one of the director’s most beloved efforts. The new release from Arrow includes brand-new restorations for both the theatrical and extended cuts approved by Smith and cinematographer David Klein. The release also includes a shopping bag’s worth of bonus content.

The second October 13 release is Kôji Shima’s 1956 classic, Warning From Space. The first Japanese science-fiction film to be shot in color, Warning From Space is the story of giant starfish-like aliens that land in Tokyo. This release marks the film’s first-ever HD release in American and includes a newly restored English dub.

The month’s final two releases hit shelves on October 27. For those looking for a last-minute addition to your Halloween playlist, look no further than Cold Light of Day. This fictionalized story about one of Britain’s most brutal serial killers, Dennis Nilsen, has largely gone unnoticed over the years, which is a shame because the film is worthy of being on equal ground with the likes of Henry: Portrait of a Serial Killer. This limited edition release includes a brand-new 2K restoration approved by the film’s director, Fhiona-Louise.

Last but certainly not least, is Nick Castle’s The Last Starfighter. Released in 1984, The Last Starfighter has been entertaining audiences for decades. Gamer Alex Rogan thinks he’s just playing another game until he finds himself transported to another planet where he learns the game was actually a recruitment effort. The Last Starfighter lands with a new 4K scan and loads of exciting bonus content. 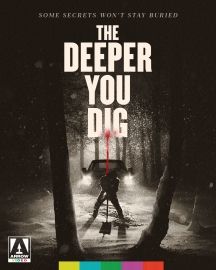 The Deeper You Dig
Themes of family, loss and survival intersect on the thin line that separates the living from the dead in The Deeper You Dig, the latest feature written, directed by and starring filmmaking family the Adams Family (Knuckle Jack, Rumblestrips) – described as “a force to be reckoned with” (Dread Central) and “the multi-hyphenates other multi-hyphenates hope to be when they grow up” (Nightmare on Film Street). Bogus tarot card reader Ivy (Toby Poser) and her teenage daughter Echo (Zelda Adams) are an unconventional but loving mother/daughter team. But when reclusive Kurt (John Adams) moves in down the road, a tragic accident results in Echo’s murder, causing three lives to collide in mysterious and wicked ways. Kurt believes he can hide his secret beneath the earth – but Echo, refusing to accept death, burrows into his head until he can feel her in his bones. As she haunts his every move, trying to reach her mother from beyond, Ivy must dig deep to see the signs and prove that love won’t stay buried. A dark, unsettling meditation on grief, survival and the brittle barrier that separates the living from the dead, this limited double-disc edition pairs The Deeper You Dig with John Adams’ earlier feature The Hatred, making for a compelling double bill of original, independent horror.

DISC ONE – THE DEEPER YOU DIG
High Definition Blu-ray™ (1080p) presentation
Original lossless PCM 2.0 stereo soundtrack
Optional English subtitles for the deaf and hard of hearing
Audio commentary by writers/directors/stars Toby Poser and John Adams
At Home with the Adams Family, an exclusive, in-depth interview with the trio of filmmakers responsible for The Deeper You Dig
It’s in the Blood: The Family in the Horror Genre, an exclusive visual essay by critic Anton Bitel exploring the theme of family in The Deeper You Dig and the Adams Family’s broader filmography
Special effects breakdown with commentary by Trey Lindsay
FrightFest TV interview with the Adams Family
Hellbender music videos
Theatrical trailer
Image gallery 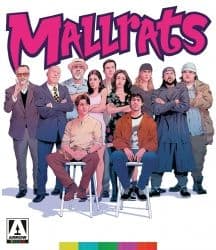 Mallrats
THEY’RE NOT THERE TO SHOP. THEY’RE NOT THERE THERE TO WORK. THEY’RE JUST THERE. Following the smash success of his first feature, Clerks, Kevin Smith returned with Mallrats. Spawning a raft of characters and in-jokes that Smith would carry throughout his career, the film continued the one-of-a-kind comedic world known as the View Askewniverse. Simultaneously dumped by their girlfriends, comic book obsessive Brodie (Jason Lee) and best friend TS (Jeremy London) plan to ease the pain of their losses by taking take a trip to the local mall. Amongst shoppers, they discover the mall is being used as the venue for a dating show, in which TS’s girlfriend Brandi is the star. Hatching a plan to win back their significant others, Brodie and TS enlist the help of professional delinquents Jay and Silent Bob to hijack the gameshow in a bid to win back Brandi. Meanwhile, Brodie carries out his own mission to make good his relationship with Rene (Shannen Doherty), who has attracted the attentions of his nemesis Shannon (Ben Affleck). Featuring a cast including Joey Lauren Adams, Ben Affleck, who would go on to be recurring collaborators in Smith’s movies, Mallrats celebrates its 25th Anniversary in this limited edition set boasting a brand new restoration and hours of bonus content. 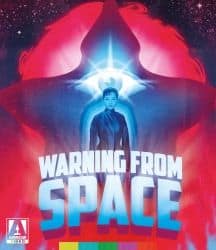 Warning From Space
The first Japanese science fiction film to be made in color, Koji Shima’s Warning From Space features eye-popping special effects from the same team at Daiei Studios that would bring Gamera to life a decade later. As Japan is rocked by mysterious sightings of UFOs over Tokyo and large one-eyed aliens attempting contact, scientists collaborate to investigate the unexpected rise in extraterrestrial activity. Unbeknownst to them, one of the aliens has already assumed human form and is about to deliver a very important message… that could be humanity’s last hope for survival. With a witty script by Hideo Oguni (screenwriter of several Akira Kurosawa classics including Seven Samurai) and iconic starfish-like aliens designed by avant-garde artist Taro Okamoto, the original Japanese version of Warning From Space finally makes its official English-language video debut. 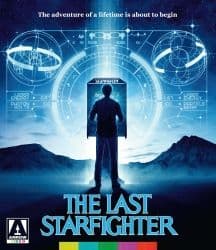 The Last Starfighter
Greetings Starfighter! You have been recruited by Arrow Video to experience the 1984 sci-fi classic as you’ve never experienced it before! Directed by Nick Castle, the man behind the Michael Myers mask in the original Halloween, The Last Starfighter tells the story Alex Rogan (Lance Guest), an arcade game whizz-kid whose wildest dreams comes true when he finds himself enlisted to fight in an interstellar war. Now newly restored from a 4K scan of the original negative and featuring a 4.1 mix originally created for the film’s 70mm release – never included on previous home video formats – The Last Starfighter arrives loaded with brand new and archival bonus features. Strap yourself in: the Blu-ray adventure of a lifetime is about to begin! 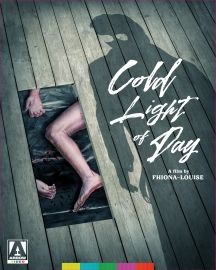 Cold Light Of Day [Limited Edition]
February, 1983. Detectives are called to a residential address in the London suburbs following reports that the drains have been clogged by human remains. One of the property’s residents, Dennis Nilsen – a mild-mannered and unassuming civil servant – is brought in for questioning, leading to the discovery of one of the most shocking and disturbing cases of serial murder ever to rock Britain. Offering a grim and gritty retelling of the story of “Des” Nilsen, often dubbed the “British Jeffery Dahmer”, 1989’s Cold Light of Day stars Bob Flag (the face of Big Brother in Michael Radford’s 1984) as Nilsen-cipher Jorden March, delivering one of the most chilling and credible portrayals of a serial killer ever committed to screen. From writer-director Fhiona-Louise, Cold Light of Day – which picked up the UCCA Venticittà Award at the 1990 Venice International Film Festival – is a hugely underseen and underrated British effort that can stand proudly alongside the likes of Henry: Portrait of a Serial Killer as one of the most unflinching true-crime films of all time.