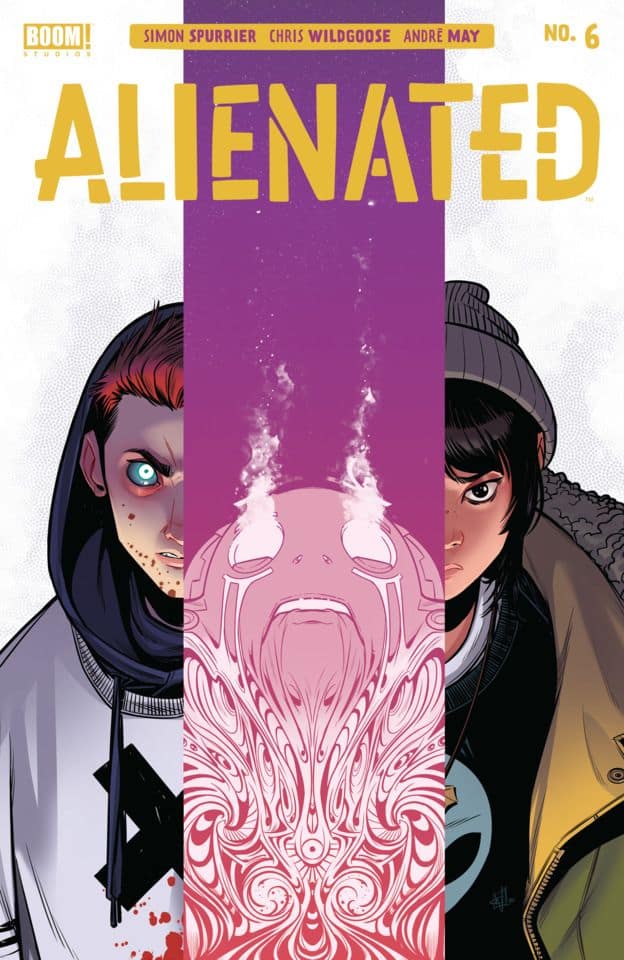 Alienated #6 – This Simon Spurrier and Chris Wildgoose series has been a favourite of mine since it debuted.  It’s a strong look at the problems kids are facing, with a special eye towards the toxicity of privilege, but told through a story about three teens linked telepathically to an alien with strange powers.  It has felt very observant, and contains some very well-developed and written characters.  The ending is a little harsh, but that is very appropriate to the tone of this book.

Ascender #13 – Another character from Descender turns up as Telsa and her crew make their way to a place they think will be safe from Mother.  At the same time, Andy finds a hidden spot on Sampson where he might gain some assistance.  This is one of those issues that accomplishes a lot without particularly standing out; it’s solid.

Chu #3 – As we get deeper into this series, we get to meet Granpa Chu, who is not a great man, and get to know Saffron and Sage a little better.  The hitman is dealt with, and while Saffron goes further down a dark path, Sage and Tony stay pretty clueless about what’s going on.  Whenever we meet new Chus in this series, which is a prequel to Chew, I just assume they are all going to die.  Given how brutal John Layman can be to his characters, that seems likely, but even knowing that doesn’t mean I’ll see it coming.  I’m very pleased that this series exists; it’s fun. 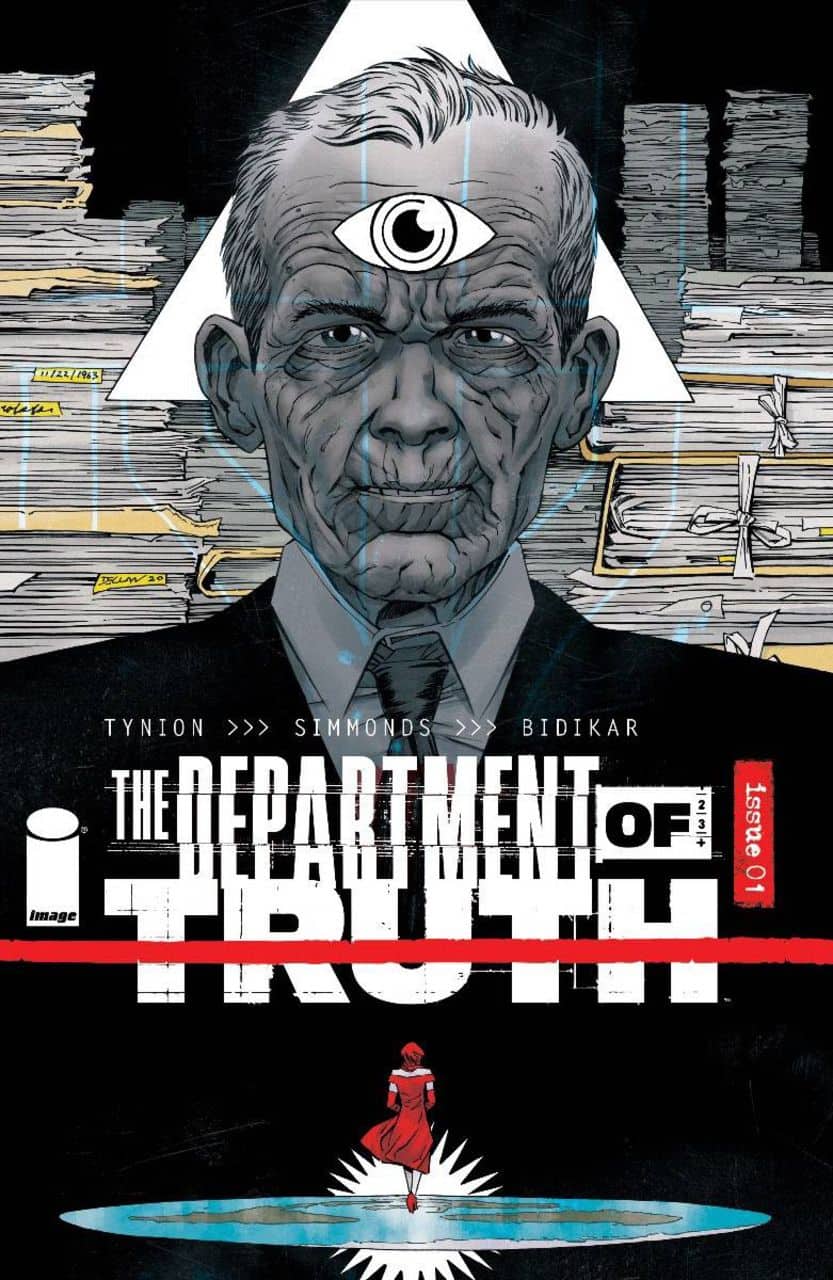 Department of Truth #1 – I passed over this title when it was first solicited because I was put off by Martin Simmonds’s artwork (imagine wanting to be the next Bill Sienkiewicz, but then only studying his panels of people talking quietly, so that’s all you imitate and build on).  I decided that it would be worth checking out anyway, on the strength of writer James Tynion IV’s other work (like The Woods, not his DC stuff).  I like the concept behind this, which seasons The X-Files with a dash of the Invisibles.  An FBI agent sees some things he shouldn’t have when the Koch Brothers try to recruit him into their Flat-Earth Society.  I found myself predicting most of the big story beats, but am still intrigued enough to give issue two a shot.

Legion of Super-Heroes #9 – A ton of artists put this one together, as we see the rest of the Legion’s “trial”, and learn of a great darkness looming in the Legion’s future.  I really hope that Brian Michael Bendis isn’t trying to re-create the classic Great Darkness saga, and that he isn’t bringing Darkseid into the future.  We are slowly getting to know this Legion, and I’d like to see them deal with some smaller threats before launching into some massively epic thing.  Still, I have to say that this book has really grown on me.  I’m not sure why Mike Grell’s page has the Legionnaires wearing the classic costumes he designed for them (including the most confusing Cosmic Boy outfit ever – I can never tell if he’s wearing a full top, or if he’s just wearing a weird nipple to waist, shoulder-baring harness thing).

Rogue Planet #5 – There’s often a thing in horror and science fiction stories where the explanation of the plot and resolution of things can ruin what made the beginning of the story so cool.  Rogue Planet doesn’t quite reach that point, but there’s something unsatisfactory in the way Cullen Bunn wraps things up, with a bit of a deus ex machina, in terms of human ability, creating a lot of the explanation for all the craziness that has fueled this story.

Star Wars: Doctor Aphra #4 – This title is growing on me, but I still think that writer Alyssa Wong hasn’t quite captured the full range of possibilities Aphra’s character provides.  She’s less in control in this arc, and that actually kind of bothers me.  I like my Aphra scheming.

That Texas Blood #4 – This latest issue of one of my new favourite comics continues to build on the previous issues.  Randy faces some demons and his old house, while his girlfriend decides to come looking for him in Texas.  The Sheriff is beginning to investigate deeper into what’s going on, and has a bad feeling.  This book has established its core cast and gotten the story underway, and it’s really holding my attention.  There’s a real sense of place with this book, and that’s what I enjoy most.

X-Factor #4 – The second chapter of X of Swords is double-sized (this story is going to be soooo long!), and answers some structural questions I had about this crossover event.  This is definitely not an issue of X-Factor, as regular writer Leah Williams and artist Carlos Gomez continue the story right where it last left off.  Sure, there’s a big focus on Polaris, but that’s all this has in common with the regular book.  There’s a problem when Rockslide is resurrected after his death on Otherworld, which leads to more problems for anyone who might die there.  The story lurches into gear, as we get a sense of who the X-Men intended to wield the swords are, and Jonathan Hickman’s fingerprints are everywhere in this story.  There were a few interesting things, like our first glimpse in ages of Moira MacTaggert, but I’ll be honest and say that I found this a little hard to follow.  One thing that bugs me is how much Opal Luna Saturnyne looks like Emma Frost.  I’m curious about this story still, and have ordered all twenty-two issues through my pullfile, but I’m feeling a little trepidation that I might not be able to stay interested for quite that long.  We’ll have to see.

Year Zero #5 – The first arc of this multi-story zombie series closes with some resolution for the four key figures we’ve been following (in Mexico, Japan, the US, and Afghanistan), while the Antarctica segment connects to the zombie plague.  Ben Percy did a good job of trickling these stories out, and I’m curious to know if the already announced second volume is going to continue with these plotlines, or if we’re going to see how people in other parts of the world continued to cope with the zombie madness.  I’m glad it’s coming back, and while I like incoming artist Juan Jose Ryp, I’d also like to have seen this volume’s artist, Ramon Rosanas, stick with it.

Makaya McCraven – Universal Beings E&F Sides – Makaya McCraven released Universal Beings, an incredible collection of music a year or two ago, and now he’s added a follow-up to that project – fourteen more tracks that has the Chicago drummer collaborating with the jazz greats of London (Shabaka Hutchings, Nubya Garcia, Kamaal Williams, Ashley Henry), New York (Brandee Younger, Joel Ross), Los Angeles (Miguel Atwood-Ferguson, Carlos Niño), and Chicago (Junius Paul, Jeff Parker, and Tomeka Reid).  This is a who’s who of the jazz world, pulled together by McCraven’s drumming and remixing.  This is way more than a footnote to an already incredible album; it extends and revisits it in interesting ways.  International Anthem might be my favourite record label of 2020.

Tenderlonious – Qurantena – Tenderlonious plays a huge mess of synths, drum machines, and wind instruments on this lovely album.  The track and album names suggest that this is meant to be seen as a soundtrack to social distancing, and it’s clear that Tender spent his isolation time creating lush soundscapes.  It’s a very nice example of the sides of the current UK jazz scene.

Terror/Cactus – Confluencia – I feel like I might have written about this when I first discovered the album online, but with a recent limited run CD pressing, I came into possession of this fantastic electro cumbia album from Seattle.  The person or people who make up Terror/Cactus layer electronics all over their rich cumbia textures.  It’s a good album to zone out to.