WWE Friday Night Smackdown On Fox Sees Kick Off Of WWE Draft 2020 and Some Shockers Including A Surprise Return! October 9, 2020 Results and Spoilers!

SmackDown results, Oct. 9, 2020: The Fiend brings a dark end to Night One of the WWE Draft

A wild Night One of the WWE Draft featured The Fiend outlasting Kevin Owens, The New Day reuniting for a SmackDown Tag Team Title win, Bayley defending the SmackDown Women’s Title against Sasha Banks and much more. 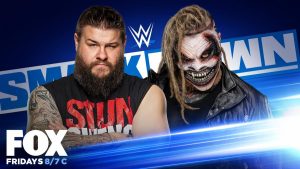 Big E has been waiting to get his hands on Sheamus for weeks, and he made the most of the punishing opportunity when he finally did. The New Day powerhouse endured Kendo stick strikes, broken eggs and a smash onto the windshield in the brutal battle with The Celtic Warrior. As Sheamus tried to shut the trunk on Big E, the energetic Superstar held it off with his leg and got back on the attack. In the final moments, Big E landed a Big Ending over a table to earn a hard-fought victory in the grueling Falls Count Anywhere Match.

In a Twitter exchange earlier in the day, Jeff Hardy & Matt Riddle expressed their desire to team up. The Miz & John Morrison were more than happy to give them the opportunity. The Charismatic Enigma & The Original Bro showed the chemistry of a long-time team, as they dominated points of the match. Riddle clinched the victory for the newly-formed tandem with a crushing Bro Derek to The Miz.

The fireworks came after the bell, as Lars Sullivan made a shocking return to WWE action. “The Freak” laid waste to Hardy, Riddle and Miz, as he showed off his colossal strength. What could the return of Sullivan, who is eligible to be drafted on Monday, possibly mean for the WWE landscape?

After the brutal attacks from her former best friend, Sasha Banks rushed back from injury to get an opportunity to end Bayley’s historic title reign. The Boss was on fire early, as the rage was evident from the opening bell. With the challenger in control, Bayley opted for an easy way out and once again attacked Banks with a steel chair. The SmackDown Women’s Champion retained her title due to the champion’s advantage, but it was clear the bad blood is still boiling. Banks made one final statement, as she challenged Bayley to meet her at WWE Hell in a Cell.

Kofi Kingston & Xavier Woods wasted little time in their return and took on Shinsuke Nakamura & Cesaro for the SmackDown Tag Team Titles. There were little signs of ring rust, as the pair’s chemistry was on point in a battle with the titleholders. Kingston swung the match with a huge Trouble In Paradise for The King of Strong Style, and Woods followed up with a huge splash to reclaim the titles. The most shocking moment came after the match, as the trio learned their WWE Draft fate. Kingston & Woods were picked by Raw, while Big E was staying on SmackDown. What lies ahead for the seven-time SmackDown Tag Team Champions?

The night ended in punishing fashion as Kevin Owens brought the fight against The Fiend. The Fiend was menacingly unfazed by repeated early strikes from his opponent. Owens looked to swing the match with a big splash on the outside, but HE kept on coming. The Fiend locked in a Mandible Claw, as Owens went for a Stunner. Despite Owens landing the Stunner, The Fiend held on until the three-count ended KO’s night.

Plus there was night 1 of a 2 night draft too.