Fans Of DC Comics’ Shazam, Malibu Ultraverse / Marvel’s Prime and More Rejoice As Image Comics’ 1st Man Is Back To Complete A Story Almost 25 Years In The Making Via Crowdfunding!

Fans of a boy’s wish fulfillment to be an adult hero should pick up 1st Man.

I’m looking at you fellow Shazam and Prime fans.

With that, 1st Man Campaign details below.

Andy Smith here and I’ve been a professional comic book artist for almost three decades. Some of my clients include Marvel, DC, Image, Valiant, Cross Gen, and, Ominous Press. Check out some of my work at www.andysmithart.com. Go ahead, take a peek! I’ll be here when you’re done perusing my work.

1stMan is back better than ever!

I created 1stMan back when I was a kid in the 80s when I was still only dreaming of being a professional comic book artist. I grew up reading Marvel’s Captain Marvel and DC’s Shazam, those books are a huge part of what I love about comics, and I modeled my guy after them!

Fast forward to 1997 and I was given the opportunity to bring 1stMan to life through Image Comics! Talk about a dream coming true; I couldn’t believe how lucky I was to actually go a 1stMan comic. I put out the original issue 1 and the story ended with a “to be continued”…

…Which, unfortunately, with the sales numbers 1stMan got, I wasn’t able to do…UNTIL NOW!

Harkening back to the silver-age of Marvel and DC Comics, this return of 1stMan is fast-paced, action-packed, character-driven fun!

Wait, what?! You never read the original adventure of 1stMan? Don’t sweat it, I’ll fill you in.

1stMan is the story of Luke Henry a freshman in college that is chosen to carry on the last Essence of the 10.

There are 10 powerful Essences scattered across the universe, each inhabiting a being on different planets. If the being dies, the Essence will search out another worthy vessel. If somehow, all 10 essences were collected into one single being, that being would become the most powerful force in the Universe, a virtually unstoppable force.
Once Luke gains that power, he can change into Apollo, the 1stMan!

Monarch, the larger-than-life, power-hungry villain of this story, has collected 9 of the essences of the 10 by destroying the worlds they inhabited. He now has his sights set on the last one. Monarch travels to the world inhabited by the 10th essence, only to see it escape his grasp and find a worthy being to protect it and contain its power: 1stMan!

But 1stMan isn’t the only character in this tale. Penumbra is the last survivor of one of the worlds destroyed by Monarch. She’s a femme fatale, not an ally of 1stMan so much as she is concerned with self-preservation. Her main goal is to stop Monarch from gaining the 10th Essence. Once he wields the power of the Ten, Monarch will be unstoppable. 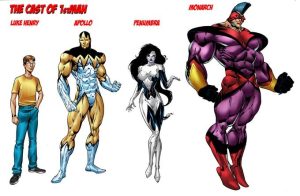 Each character will get their own biography page!

This book will reprint the original 27-page story, with much of the artwork revised, redrawn, and remastered with all-new colors. To finish the story, I’ve added 24 new pages of art! Included is a one-page origin story of 1stMan as well. In total 52 action-packed pages!

The Parody ad is back!

Are you a fan of Bart Sears’ art? I know I am so I asked my long time pal if he’d contribute a variant cover to the project and he was thrilled to do so!

In our stay at home and no conventions, I’ve been doing some sketch covers that I would normally take to cons to sell but without any of those, I’m offering them here.

I created 1stMan when I was a kid and when I got the opportunity to do the book in 1997 through Image Comics I asked a good friend of mine Rob Snyder, who is also a cartoonist, to help me with some of the dialogue. He’ll be returning to lend his writing talent again to the dialogue with me. The colorists is Periya Pillay, he colored my Jungle Lords/ Ultra comic-book and the lettering is done by Steve Dutro, a buddy of mine that I attended the Kubert School with. Steve has been lettering comics for almost 30 years, working for Marvel, DC, and more! He also did the logo design for 1stMan. Another buddy of mine, Keith Champagne, will again serve as an editor on the book.
What are the funds for?

Great question and I’ll keep the answer simple. I’ve produced most of the new art to finish the story and will use the funds to pay myself, the colorist, additional production costs, and printing.

I’ve been wanting to finish 1stMan for a long time and I’m very proud of this project. However, with anything there comes possible risks. As I stated above the art on my end is almost complete and I will need the time after the campaign to get the rest of the book colored and lettered.

If you follow creator Andy Smith on social media you get to see even more art.

To support the campaign visit Kickstarter.