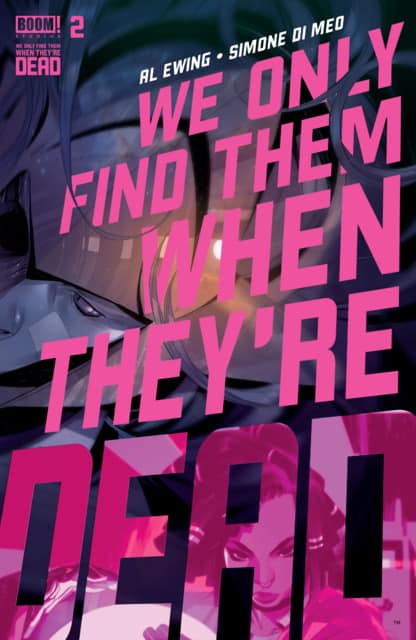 We Only Find Them When They’re Dead #2 – Last issue, Al Ewing and artist Simone Di Meo set up this world and series for us, and they use much of this one to dig into the characters and explain to us why they are willing to risk their lives to seek out still living gods (in this world, dead gods are mined for their proteins and minerals by autopsy ships that carry out elaborate rules).  We still don’t know why the captain of the ship is so determined to make this unprecedented move, but we get a hint as to the connection between him and the cop who is pursuing them.  I really like the inventiveness of this series, and find Di Meo’s art to be lovely, but the colour, mostly done by Di Meo, is often murky and obscures the art.

Bang! #4 – The fourth member of the cast is introduced in this issue.  Paige Turnier is a “Murder She Wrote” character of mixed ethnicity, who has a history with Thomas Cord, the James Bond figure in this series about 80s style pulp heroes.  Now that the team is assembled, I guess Matt Kindt and Wilfredo Torres have only one issue in which to resolve this storyline (unless this series is six issues long – I never remember details like that).  This is a fun title. 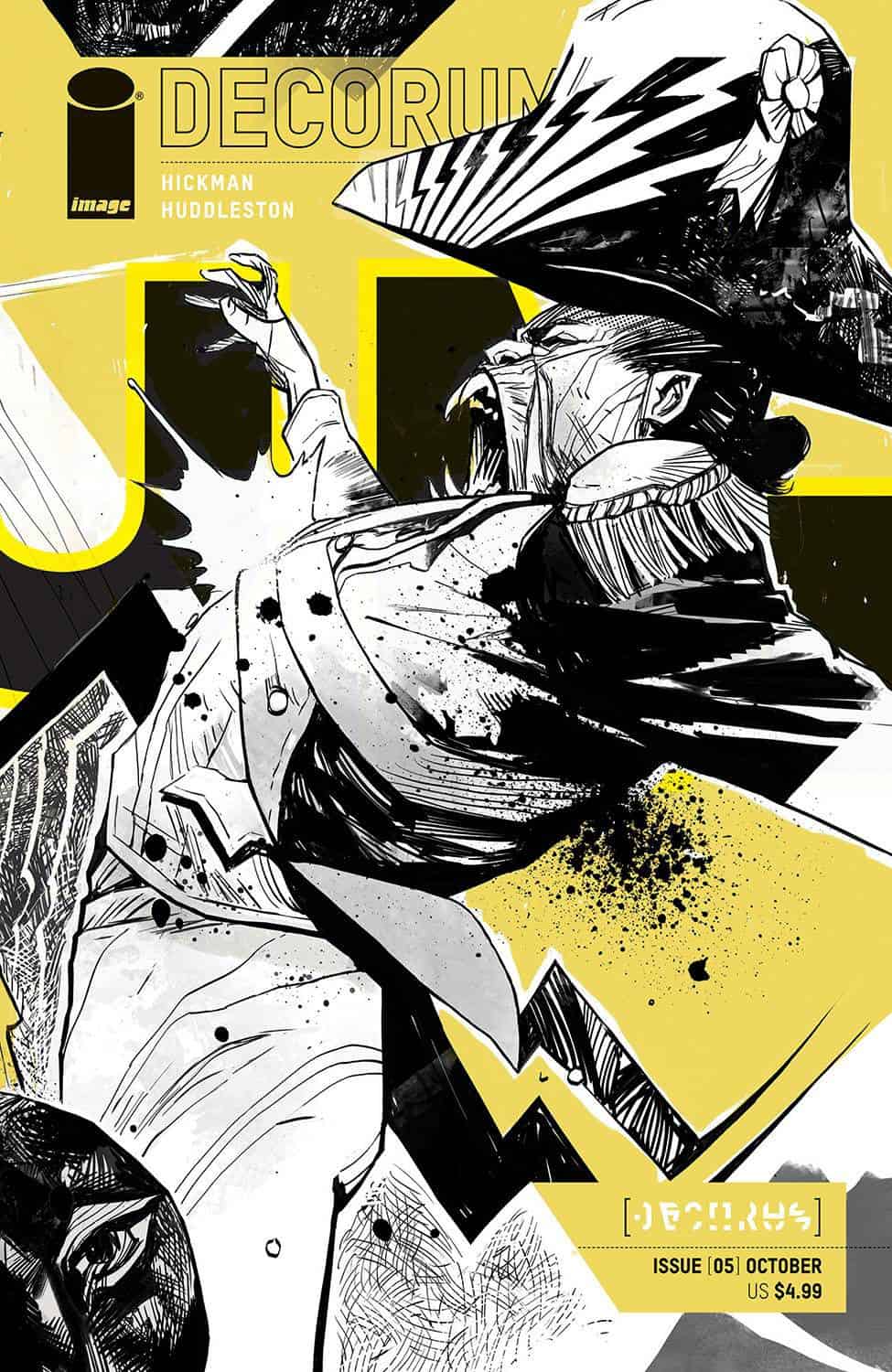 Decorum #5 – Jonathan Hickman’s series at Image jumps around a lot, but this extra-long issue focuses on Neha’s time in the assassin school, and it’s a solid read.  Hickman explores three years of her training using a very specific structure that allows artist Mike Huddleston a lot of latitude to employ a variety of artistic methods and styles.  I don’t always understand what’s going on in this series, and I definitely don’t understand how the different aspects of it fit together, but I like each individual story, and look forward to the day when I can see the big picture.

Die #14 – It somehow just dawned on me that, seeing as this entire series is set on a world fashioned after a D20 die, it’s likely only got six issues remaining in it.  I feel a little dumb that I’d not thought about that before…  This is another very solid issue, as the two halves of the party make moves on the forge that they need to destroy, and as everyone is generally miserable some more.  This is a very dark series, but I find I enjoy it even as things get progressively worse.  Matt makes a big step in this issue, becoming a lot more badass. 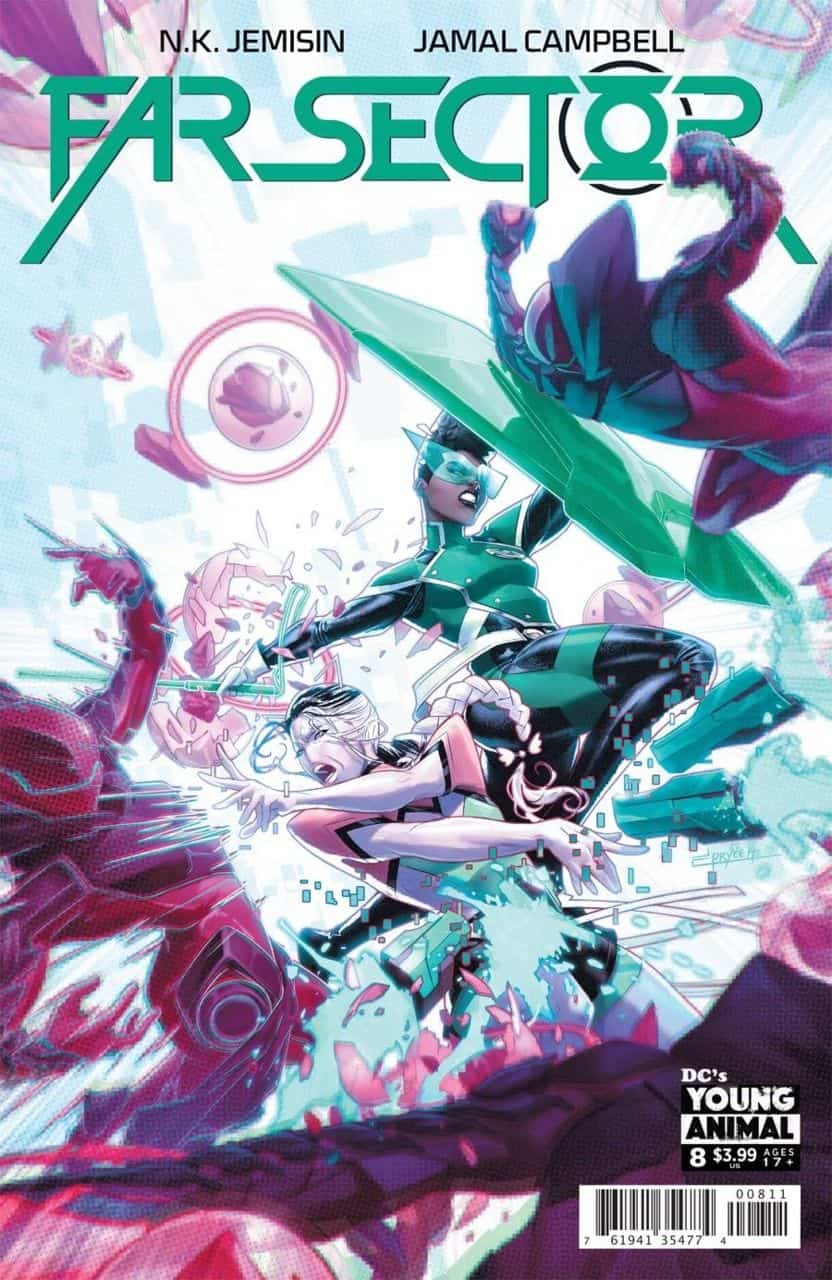 Far Sector #8 – It feels like it’s been a while since we last saw an issue of Far Sector, so I was extra happy to dig into this one.  I continue to be impressed with the way NK Jemisin has structured the strange alien society in this book, and the way in which she is able to use it to comment on our own society.  This is a great series, and maybe the best thing DC is doing right now.

Fire Power #4 – Most of this issue is given over to a bump in Owen’s marriage when his wife realizes that he is still thinking of his lost love.  At the same time, the Dragon’s Claw is ready to make its move against Owen.  This series has been off to a great start, and now it’s starting to settle into the larger story.  This being a Robert Kirkman book, I imagine that means the rug is about to get pulled out from under things soon.  Chris Samnee is doing fantastic work on this comic, and once again, the fight scenes are epic.

Lonely Receiver #2 – Zac Thompson and Jen Hickman are using this book to tell a very cautionary story about creating lasting bonds with technology, as the main character struggles to live after the AI in her phone leaves her, and her life starts to unravel.  Thompson has a strange penchant for biological technology (see his Come Into You miniseries at Black Mask) that kind of makes him the David Cronenberg of comics.  This book is sad, but also very interesting. 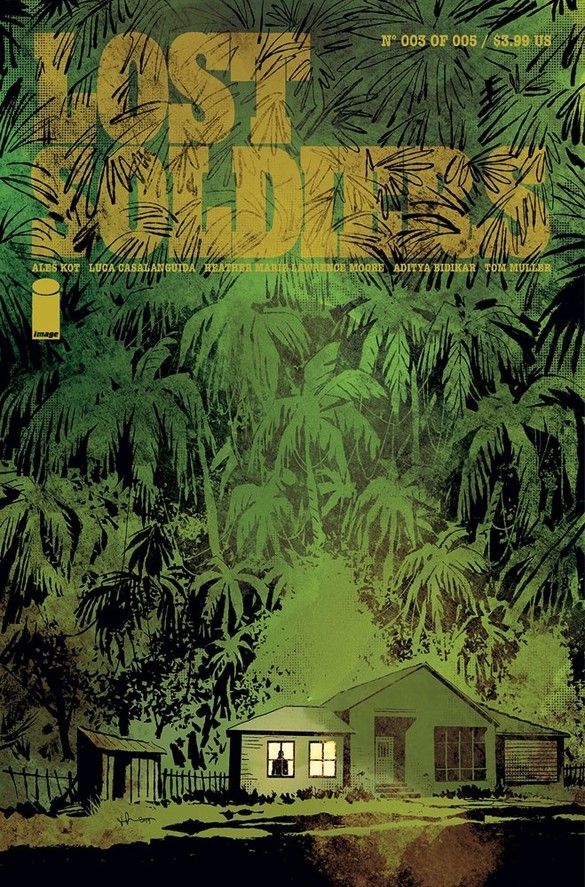 Lost Soldiers #3 – Aleš Kot’s latest series doesn’t take us to Vietnam in this issue, but it makes it clear how Vietnam has never left the main character (even if everything else has).  This series is pretty bleak, but I’m enjoying it.  This was a nice chunky issue, with a fantastic cover.

Miles Morales: Spider-Man #19 – Miles finally learns the identity of Ultimatum, the original 616 Miles Morales, while his friends keep acting like that Outlawed mini-event is happening (there’s not even a logo on the cover to tell you this is a tie-in).  I’m going to be happy when this arc is over, because while I’ve generally liked what Saladin Ahmed has been doing here, things have been dragging a bit lately.

No One’s Rose #5 – I really enjoyed this series by Zac Thompson, Emily Horn, and Alberto Alburquerque.  It’s vision of a future where a small population of humanity lives in a dome, in a highly stratified society, carries some key messages for us today, and also tells a good story.  Things wrap up in this issue, as Tenn has to adjust to the realization that everything she’s ever believed has been wrong, and that the people she’s worked so hard to impress have been lying to her all along.  This was a very solid series from Vault, a publisher I’m finding more and more interesting lately.

Sacred Six #3 – I can’t imagine that there is anyone who is reading this book without reading Priest’s Vampirella series, but if they did, they’d be so lost.  I find it hard to keep track of the different threads in this little, as a variety of characters begin to converge in Ashthorne Georgia, a historically black town that is also secretly home to a number of vampires and other creatures.  The book has a new artist – Julius Ohta, whose work is pretty nice, and a little easier to follow than the previous artist’s.  Priest writes this in his usual way – it’s dense, confusing, and seems disconnected, but I know that all things will clarify later on, and I’ll be happy with whatever I find at the end.

Spy Island #2 – I do wonder why a book called Spy Island is mostly about wild mermaids and krakens, but once again, Chelsea Cain is writing a story built on some strange characters and even stranger setting, and having a good time with it.  I like the way she blends a multimedia approach into all of her titles, and am interested in this one, even if I’m not entirely sure of the larger plot yet.

Star Wars #7 – Most of this issue is given over to Commander Zahra, as we learn of her history with Grand Moff Tarkin, and how it is that she survived the Rebel attack on the Death Star.  There are a number of characters like her showing up across Marvel’s Star Wars books, but they become effective foils for the story.  Zahra’s interesting, and I look forward to seeing what happens, now that Leia has lured her fleet into a trap.

Thor #8 – In the end, I’m not sure why Thor wanted to troll Tony Stark into showing up in Broxton, and I don’t know why when a local mechanic picks up Mjolnir, he becomes a god, but when Stark does the same, nothing happens.  Anyway, this was an enjoyable issue, and Aaron Kuder’s art in it is wonderful.

Wolverine #6 (X of Swords Pt. 3) – Many of the various X-characters are off on their quests to find certain swords to use in a tournament to decide the fate of Krakoa, or Arakko, or Otherworld (why am I not sure?).  That allows the various writers of the X-books to explore their own characters, while furthering the larger plot.  This issue has Logan off searching for Muramasa, the guy who made a sword for Logan, and not the Muramasa Sword that I remember from Wolverine Origins.  This issue felt a little disjointed to me, as Logan is supposed to only have three days to find it, but manages to cover a lot of ground.  I got a little confused at the end of the book, as writer Benjamin Percy demonstrates a pretty extreme version of Logan’s healing factor.  I am not yet enjoying this event as much as I’d hoped I would…

X-Force #13 (X of Swords Pt. 4) – This issue of X-Force was made by the same creators as the above issue of Wolverine, and is basically a continuation of that issue.  Logan and Solem, his challenger from Arakko, have to work together to get to Muramasa, the sword maker who now resides in Hell.  I found myself getting more drawn into this chapter than the previous one, but I think that’s just because Solem is an interesting character, and I like the way Ben Percy is writing him.

Marauders #13 (X of Swords Pt. 5) – Vita Ayala wrote this issue of Marauders, which has Storm headed to Wakanda to retrieve the sword she needs to play her part in this event.  Of course, the sword she needs is sacred to the Wakandan people (despite the fact that we’ve never heard of it before), and she has to enter into conflict with Shuri and eventually the Black Panther in order to get it.  This issue does the best job yet of explaining the whole premise behind X of Swords, and I thought this approach worked well, although it also helped me come to grips with my issues with this event (aside from its massive size).  It feels like Jonathan Hickman and the others, when putting together this event, decided to make it a little too much like a massive video game, and not enough like a proper event.  These swords are kind of silly, and I have a hard time believing that Illyana and Logan are just going to sit in their spots on a circle for another seven or more issues, waiting for everyone to retrieve their swords.  Our editor here compared this series to Scott Snyder’s Justice League in terms of its unnecessary complexity, and I have to agree that there’s too much happening here for too little pay off.  Still, I did enjoy this issue (and am left wondering if Ayala is going to be the new writer on the book, or if Gerry Duggan is going to return, post-event).

Butcher Brown – #KingButch – I first saw this band opening for Kamasi Washington, and while I enjoyed their set a lot, they’ve really leveled up with this latest release.  A friend described it to me as “The Roots, but after taking a lot of CBD”, and now that’s all I can think of when I hear it.  They blend hiphop with jazz very nicely, and the feature by Fly Anakin was a nice surprise.  This is a very strong album.

Spiritual Jazz Vol. XII – Impulse! – Earlier entries in Jazzman Records’s Spiritual Jazz series focused on more obscure artists or locales, but lately, they’ve been making compilations with much bigger names in them.  This one contains songs by John Coltrane, Max Roach, Yusef Lateef, McCoy Tyner, Pharoah Sanders, and Alice Coltrane, among others, from their years at the Impulse! label.  It’s a very nice collection, but I think I liked it better when they were bringing me tracks from Japan or the Muslim world better.