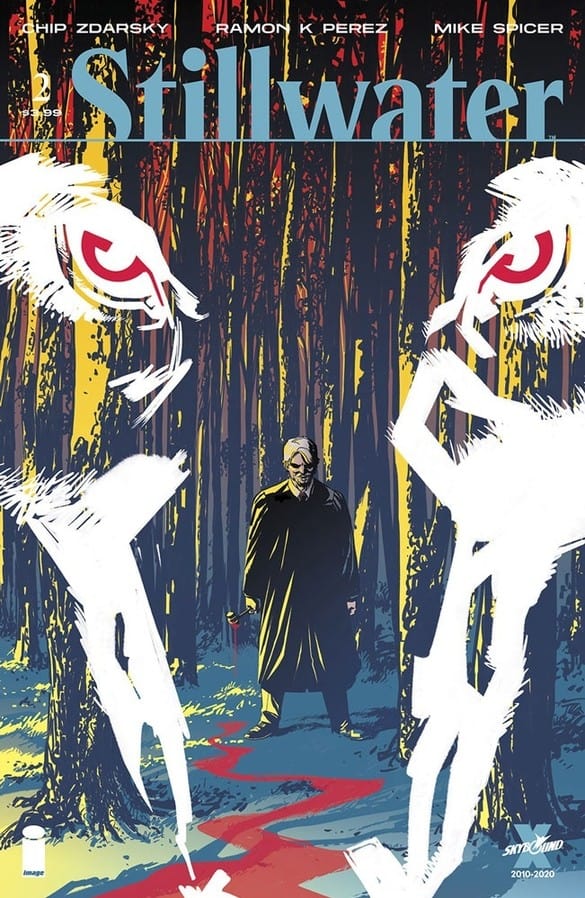 Stillwater #2 – We get to learn a lot more about the town of Stillwater, and how things work there this issue, as the town judge has to decide whether or not Daniel is going to be killed or allowed to stay.  I’m curious to learn even more about this town, where everyone is immortal, and how Daniel ended up outside of it in the first place.  Chip Zdarsky starts to fill out some of the other characters in the book, while Ramón Perez works some magic in bringing it all to life.  This is a unique series with a lot of potential.  I like that I don’t as of yet have any particular fondness for Daniel – he seems like a bit of a jerk, so I’m not sure whose side I’m on.  That’s always a plus in comics like this.

Daredevil #23 – Chip Zdarsky and returning artist Marco Checchetto are preparing Daredevil for his upcoming trial, and the real possibility that he’ll be going to jail.  That means that the Kingpin starts to make his moves behind the scenes, but Matt is there ready to confront him, with a friend’s help.  While we are on very familiar ground with this storyline, Zdarsky is finding new ways to approach it, and that’s holding my interest. 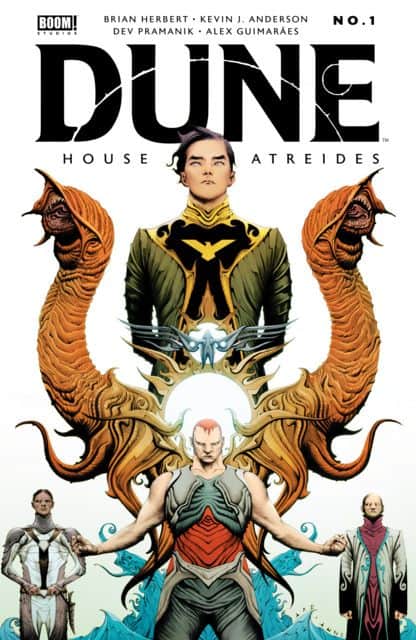 Dune: House Atreides #1 – I would consider myself a long-time casual fan of Dune.  I’ve only read three of the original novels, and hated the David Lynch film, but enjoyed the miniseries that came out a decade or so ago.  I was excited about the new Dune movie, which has been delayed by the pandemic, and was curious enough about this new Boom! prequel series, based on the prequel novels, to pick it up.  The worlds of Dune contain a lot of very cool visuals (even if so much of the stories appear to involve a lot of standing around), and I’ve always thought it would lend itself well to comics.  I enjoyed this first issue, which does feel a little too stiff and novelistic in places.  Writers Brian Herbert and Kevin J. Anderson also wrote the novel this is based on, and the transition from one form to the other isn’t always smooth.  Dev Pramanik’s art is nice, although not as stunning as I would have hoped.  Still, this story, which sets up young Leto Atreides’s education, grabbed my attention and has me interested in seeing where this is all going to lead.  I am not a dedicated enough reader to pick up every reference to the later stories, but I’m also not going to worry about that.  My hope is that Leto’s story, mixed with the ongoing story of an assassination plot against the Emperor, is going to be enough on its own.  Jae Lee’s cover doesn’t hurt, either. 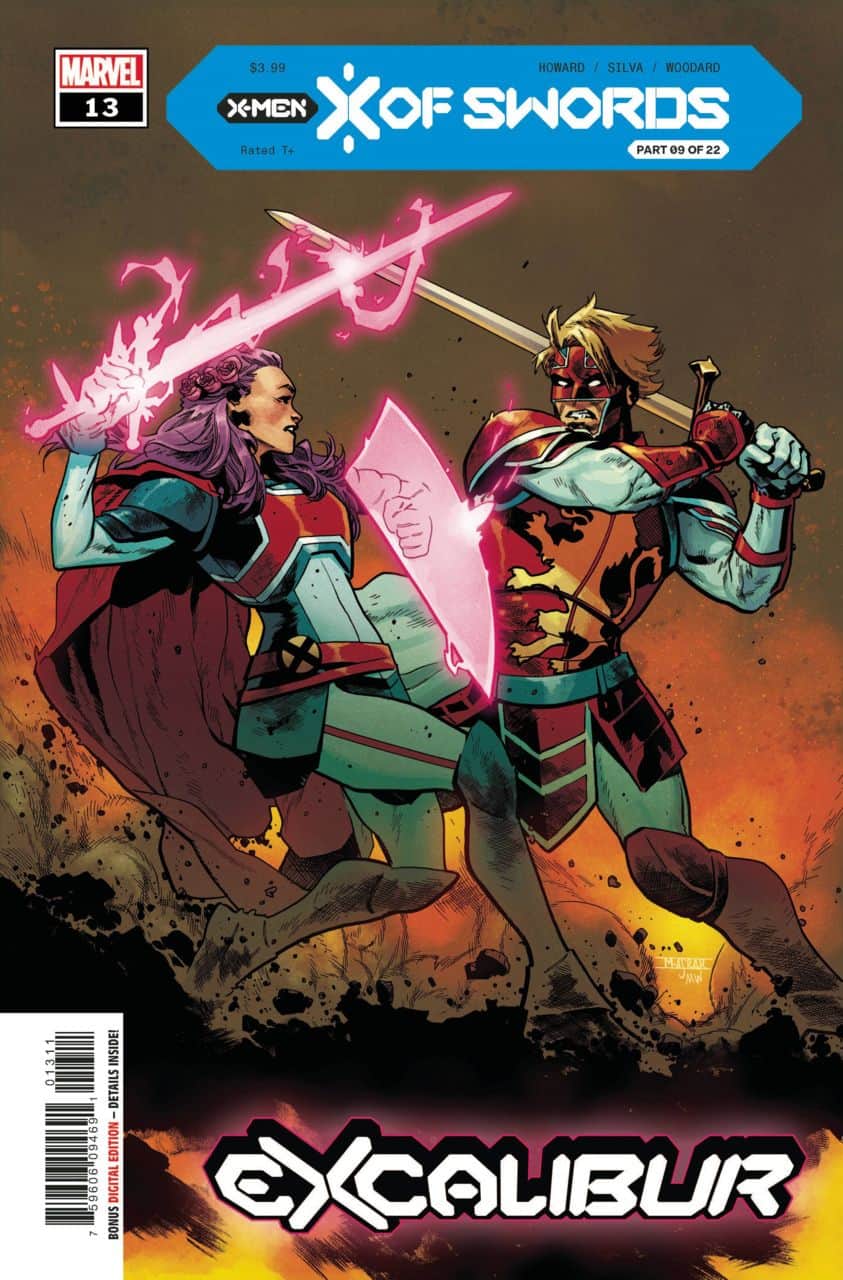 Excalibur #13 (X of Swords Pt. 9) – Excalibur is the only X-book that I haven’t been reading since it launched.  I tried to like it at the beginning, but the first few issues couldn’t really hold my attention.  Part of this is because I’ve always hated Otherworld, Saturnyne, and the weird way in which England has such a prominent place in the Marvel multiverse.  It turned me off back when Alan Moore and Chris Claremont were writing Captain Britain’s adventures, and it still does today, which is a big part of why I’ve found X of Swords to be difficult at times.  This issue includes too many things that I hate – Jamie Braddock and Saturnyne’s weird plots, to keep me fully invested.  I also don’t really understand what’s been going on with the new Captain Britain, Betsy Braddock.  It seems odd that Saturnyne would have tried to play some games with her own prophecies.  At the same time, I found my attention wandering a lot while I was reading this issue, so I might have missed some nuance.  I don’t see myself continuing to get this book once the crossovers are completed.

Family Tree #9 – We spend more time further down the timeline in this issue, as adult Josh evades some well-prepared survivors, and we start to get a sense of what he’s been up to since the events that take up the rest of the book.  In that part of the timeline, we see the immediate effects of Meg’s transformation, as people all around her begin to turn into trees too.  This book, by Jeff Lemire and Phil Hester, gives us a unique look at a post-Apocalyptic scenario, one of the few I’ve ever read about that is actually good for the Earth. 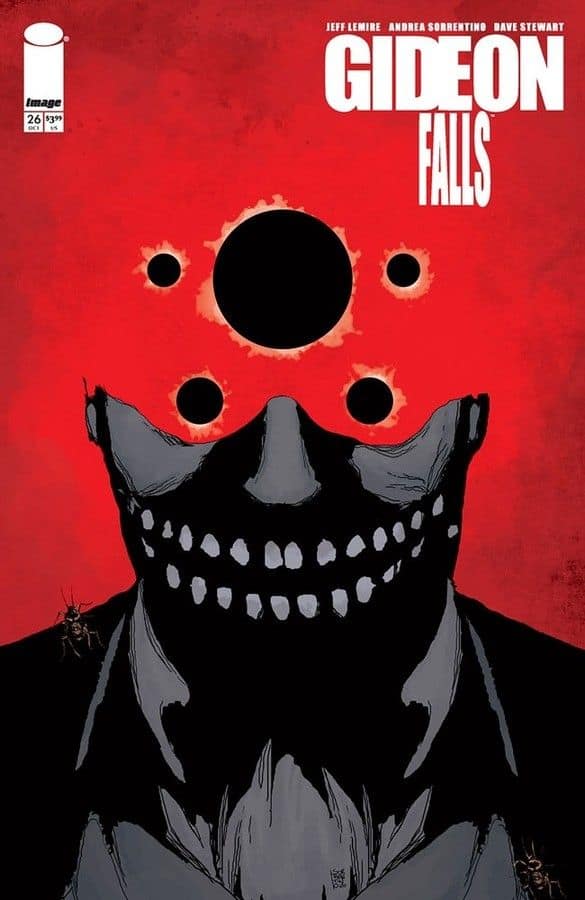 Gideon Falls #26 – I’d somehow missed that this is the penultimate issue of this series.  Things start to converge, as the characters that have been spread across the various universes begin to find one another, and Norton, at the centre of the whole story, confronts his enemy.  Jeff Lemire and Andrea Sorrentino have always kept this series interesting, although at the end, I’d be hard pressed to describe just what took up twenty-six issues so far.  This series has always been a little too decompressed.

Guardians of the Galaxy #7 – Noh-Varr attends the peace conference in the aftermath of the Empyre event, and ends up being accused of the murder of one of the other delegates.  This is a great issue, blending humour and large-scale politics.  Al Ewing is slowly building his own vision of the Marvel Universe’s space-based elements (I am looking forward to his SWORD series for the same reason), but never loses sight of the importance of character.  I hope he has a long run on this book.

Iron Man #2 – Chris Cantwell is taking his time getting his take on Tony Stark up and running, but I’m intrigued.  This issue has Tony taking unnecessary risks, and facing off against first the Absorbing Man (who is being overused some, what with his recent main role in Black Bolt, and his ongoing appearances in Immortal Hulk), and then Cardiac, the most Erik Larsen-looking character to still exist in comics.  Cantwell gets to the point with this issue, and we start to understand what is motivating Tony through these most recent life changes and risky decision making processes.  Patsy Walker is a great addition to the cast, and I remain interested in where this is headed.  Cafu’s art is lovely.

Rai #8 – Rai’s journey continues, and seen from the perspective of the newest member of this party, it’s pretty boring and single-minded.  When Rai finds a city of Positronics, it’s not long before he’s in the middle of conflict again.  This series is fine, but a little slow moving.  I liked the Walt Simonson cover this month; it took me back.

The Scumbag #1 – Rick Remender and Lewis Larosa are giving us the latest in a style of comics that includes books like The Boys and other gross-out superhero adjacent titles.  This guy Ernie is a terrible human being, a living petri dish of drugs and STIs, who happens upon a fight between two superbeings, and injects himself with the serum they are fighting over, believing it to be drugs.  Remender has done gross-out humour before (this is not even the first time we’ve seen a character relieving his bowels in public, although it was funnier in Deadly Class), and he’s pretty decent at it.  This is a fun read, completely lacking in any real nuance.  I enjoyed it, and Larosa’s art, although I find it hard to believe that a guy like Ernie would know who Hunter S. Thompson was…

Skulldigger + Skeleton Boy #5 – The cop (I’ve forgotten her name, because I basically imagine her as Renee Montoya) has Skeleton Boy and is taking off with him, hoping to get him free of the strange life he’s fallen into, but that life is coming after them, and in a hurry.  I’ve really enjoyed this odd title by Jeff Lemire and Tonci Zonjic.  It’s the first that spotlights characters from the Black Hammer universe that were never mentioned in the parent book, and it helps to expand that world.  Zonjic’s art and sense of design are phenomenal, and this has a few things to say about trauma.

Star Wars: Bounty Hunters #6 – Ethan Sacks and Paolo Villanelli continue the adventures of Beilert Valance, as he tries to find someplace safe to hide with the young girl he is now looking after, while being chased by other bounty hunters.  I’m still having a hard time staying too invested in this title.  I think I want to like it a lot more than I actually do. At the end of this arc, I’m going to have to make a decision about sticking with it or letting it go, I think.

X-Men #13 (X of Swords Pt. 10) – As Apocalypse heals from his wounds, we are treated to more retconned ancient history of how he became separated from his family, and ended up on Earth (although it’s hard to reconcile this interpretation of the character with all of his previous ones prior to Jonathan Hickman coming onboard).  I think we also finish all the sword-searching, which still leaves twelve chapters in this saga to go.  Are they all going to be sword fights?  I still find the antagonists in this event to be pretty generic.

Kelly Lee Owens – Inner Song – I found this album through NPR’s podcast, and find most of it pretty interesting.  Kelly Lee Owens has put together some interesting electronic soundscapes, although at times the album verges on pop music and starts to lose my attention.  The parts that are good are very good.

Christian Scott aTunde Adjuah – Axiom – Christian Scott and his band recorded this live album at the Blue Note in March as the city was shutting down, and you can really feel the danger of the unknown lurking in these languorous compositions.  Scott is at the top of his game here, and so is his band.  Drummer Corey Fonville threatens to take over multiple times, and just blows me away.  I saw Scott play at the Blue Note a few years ago, and it was a memorable and fantastic performance.  This tops it in every way, and I wish I could have been sitting up close to that tiny stage taking this in.  So good.

Open Mike Eagle – Anime, Trauma + Divorce – This might be one of the best albums of this year (and that is saying a lot).  Open Mike Eagle’s had a rough time of late.  His TV show (The New Negroes) didn’t get picked up for a second season, he got divorced, and faced various other problems, all of which became fodder for this album.  Eagle is more vulnerable than he’s ever been here, but he retains his sense of humour and arthouse oddity.  This has been a raw year for everyone, so I’m sure that plenty of people can relate to something on here (when he said, “It’s October, and I’m tired,” I felt it right in my stomach).

Blue Note Re:imagined – Blue Note Records has a long history of letting the new generation play with their vaults (I still love Madlib’s mix of their back catalogue).  Now, they’ve invited the best and brightest of the British scene to re:imagine some classics, and generally do their thing.  This two-disc collection features work from Ezra Collective, Nubya Garcia, Shabaka Hutchings, Jorja Smith, Jordan Rakei, Emma-Jean Thackery, Skinny Pelembe, Alfa Mist, Ishmael Ensemble, Yazmin Lacey, Blue Lab Beats, and other artists who I’ve been following a lot over the last few years.  This is a great way to revisit some old favourites, and discover new artists, and I’m thankful it’s been put out into the world.

Budos Band – Long in the Tooth – The Budos Band make instrumental funk music that sounds like it was written after reading some Cormac McCarthy.  It’s dark and menacing, but also virtuoso in its drive and atmosphere.  It’s good music for uncertain times.