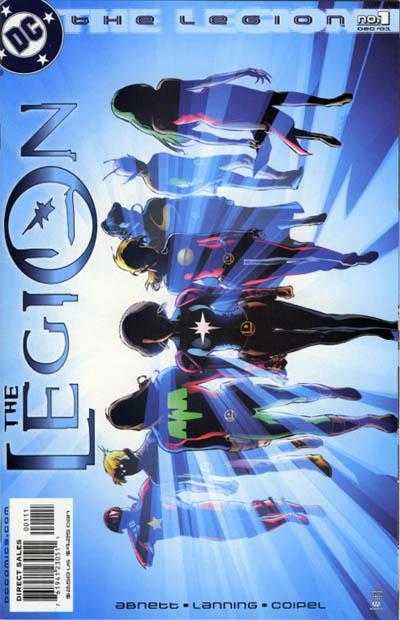 Spoilers (from sixteen to nineteen years ago)

Dan Abnett and Andy Lanning really shook up the Legion of Super-Heroes, wrecking the Earth with an alien invasion, destroying the stargate network that made the United Planets work, causing half of the Legion to be lost in space, disbanding the rest of the team, and then scattering them.  The Legion Worlds miniseries showed us that Robotica, a race of alien AI, were attacking Affiliated Planets worlds, and making incursions towards Earth.  The UP President, Leland McCauley, was clearly being played by his aide, Mr. Venge.  The Lost Legionnaires were able to return, but we didn’t see that, and so aren’t sure that everyone made it back (we know that Monstress and Live Wire didn’t).

When The Legion opened, my interest in the team was at the highest it had been since the reboot began.  New superstar artist Olivier Coipel was working with DnA, and the team finally had the mature feel that I loved about their original incarnation.

And yet, I don’t remember a thing about this series.  Even when I look at the covers, which I vaguely recognize, I don’t remember reading this series.  I don’t think DnA stayed through the whole run (which was less than three years), and so I might squeeze two columns out of this series.  Either way, this marks the beginning of the end of my fifteen or sixteen-month long project of reading every Legion comic in my collection, starting in 1978 and ending before the threeboot took place.  It’s been a long journey, and my fear is that it is going to end in a whimper.  Let’s find out…

I’m really glad that I decided to stick it out, rereading the bulk of the Reboot Legion to this point, only because this run ended up being way better than I remembered.  I’ve long known that Dan Abnett and Andy Lanning are terrific writers, but I’d forgotten how good they were on this book after they relaunched it.

It feels very much like DnA were trying to return the Legion to their former glory, and slowly took steps to correct oversights and slights visited on the team during the reboot.  We got Wildfire and Timber Wolf back, got Dreamer on the team, put Umbra back in a more traditional costume, did the same with M’onel, and generally returned the team to a place of prominence in their galaxy (and the second one).  The team felt important during this run, after they dealt with the threat of Ra’s Al Ghul.

Not everything was perfect – I hate the extent to which they had to rely on the 21st century in this run.  Leaving aside Superboy’s presence (more on that later), I didn’t like seeing them go up against Ra’s and Darkseid in such quick succession, with a detour to fight a bootleg version of the 2000 Justice League, but in all cases, I can’t argue that the stories were epic and widescreen.  One thing that I thought about while reading these bigger stories is that this run feels a bit like DC’s answer to The Ultimates, which was running around the same time.

DnA really embraced the size of the Legion, with something like twenty-seven or twenty-eight members (I decided to count Chuck as an official Legionnaire, since he got more screen time than Kinetix, Violet, Karate Kid, or XS), an an equal-sized group of trainees that never really got to do anything at all.  The Legion moved into a satellite the size of a moon, and made use of a pretty much magical form of transportation to be able to go absolutely anywhere in two galaxies.  I like that Legion World had a big support staff, yet it is very clearly the Legion that runs the show (we stopped even seeing President Wazzo pretty quickly).  It really did feel like the Legion got rehabilitated during these years.

The problem with the size of the team, however, is that very little character development took place over this run.  Kid Quantum went from being an afterthought of a character into a capable and formidable leader, as well as being Rokk’s love interest.  I really grew to like Jazmin over the course of this run, and wish that Brian Michael Bendis had brought her back in his current Legion title (he is also running with the expansive approach to the team, as there are characters we still haven’t met yet).

Some other characters got some work, but two of the ones that transformed the most, Kinetix and Sensor, were quickly ignored after their changes stopped being plot points.  I’d hoped to see some resolution to both of their stories.

DnA left behind a string of other unresolved plotlines.  Star Boy’s powers appear to be working properly again by the end of the run with no explanation, and we never revisit the love triangle subplot based on Tinya’s suspicions that something was happening between Jo and Imra.  In fact, we never saw Tinya and Jo reconcile and get close again, nor did we get to find out what was going on with Cub’s rapid aging (or why any parent would have ever given him that name).  I’d expected that at some point, we’d revisit the fact that Mekt was walking around wearing Garth’s uniform, but we never even got to see the two brothers meet again.  Finally, I’d have expected DnA to address Superboy’s presence in the future before they departed.  I also wonder why we didn’t see more of the team interacting with Superboy, especially given that Luornu had a crush on him before.

Granted, the series didn’t end when DnA left, but it did only stumble along for another five issues (which means you can expect my next column to come pretty soon).  These dangling plot points leave me wondering if perhaps DnA cut their run short for some reason.  I know that it wasn’t long after this that Mark Waid and Barry Kitson’s “threeboot” Legion began, but I don’t want to talk about that here.

Artistically, this book was impressive.  Olivier Coipel began the run, and his art matched the rough and tumble environments that the Legion found themselves in, as Earth was ravaged a couple of times, and the team had to scramble for their existence.  For a while, Coipel had some of the team wearing matching jackets, which is something that I absolutely love in team comics.  Jacket eras are always favourites of mine, from Morrison’s X-Men, through the terrible 90s Avengers comics, and even Justice League Task Force.  I love me a good team jacket.  As things began to look sunnier for the team, Chris Batista came onboard and did an amazing job of showcasing the team in a more positive light, and really captured their youth, and general litheness.  I don’t understand why Batista didn’t become a bigger star.

I wish this run had continued for a lot longer.  While it was not as strong as the Levitz/Giffen, or Giffen/Bierbaum/Pearson runs, it was the closest anyone got to that level of quality in a very long time.  I would also argue that the Legion has not been this good since, including Bendis’s run (which has a lot of potential still).  I do wish more characters had had more moments, and that the threats the Legion faced were broader than a selection of classic Legion villains and characters from the 21st century, but I found myself excited each day to pick up the next issue of this run.

Next time, I’m going to wrap things up with a fill-in issue, and then Gail Simone’s four-part story, and then that will be it with me writing about the Legion.  I’m not sure if you can count the “Threeboot” as “retro” yet, but I also don’t have any real desire to revisit that series.

If you’d like to read any of the stories I talk about here, you are going to have to dig, but at least the Foundations storyline was collected at some point:
The Legion: Foundations