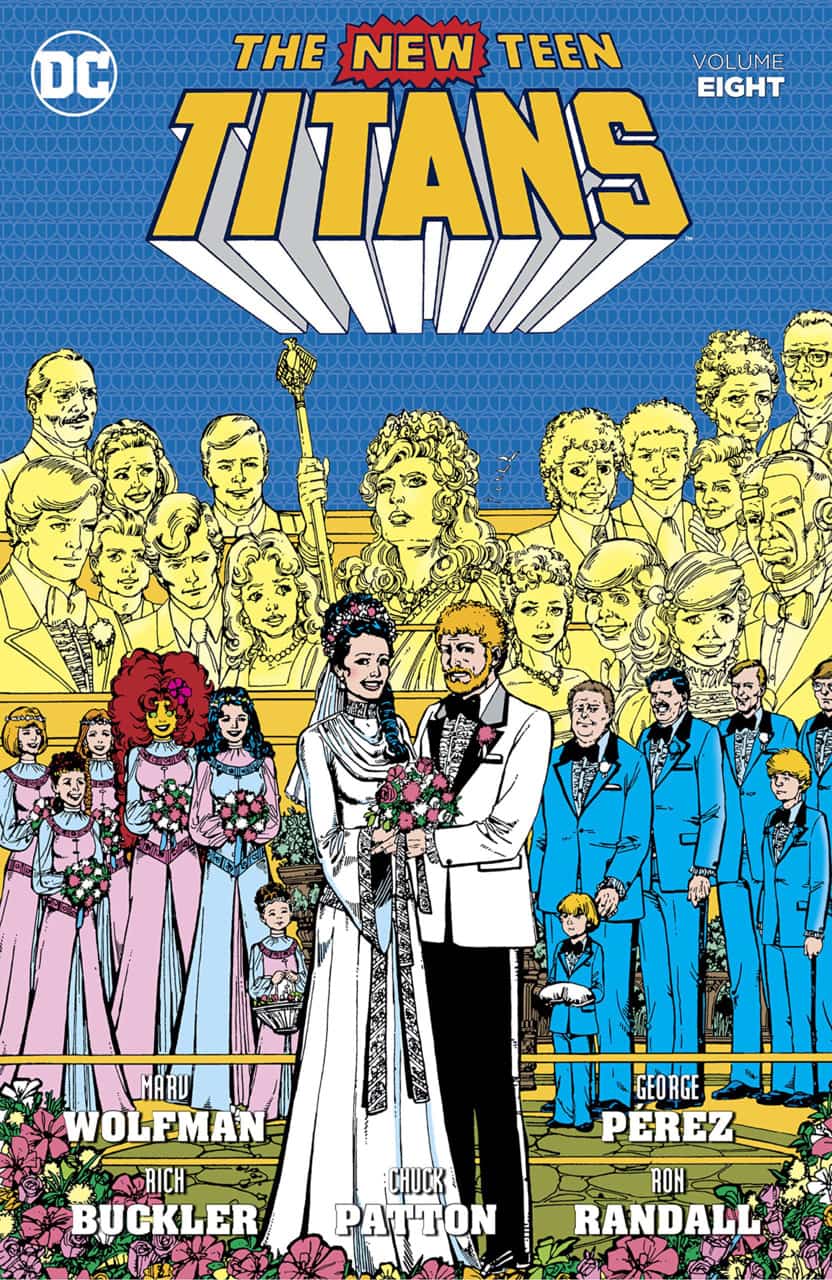 Spoilers from thirty-five to thirty-six years ago

I started reading these trades because I’d never experienced the legendary Wolfman/Pérez run, and because I wanted to read The Judas Contract with all context intact.  I still have two trades in the initial pile that I bought almost a year ago, and this is the first one that has less of George Pérez’s art in it.  By this point, the Titans had two monthly books – Tales of the Teen Titans, and the relaunched, direct market, finer paper New Teen Titans.  For whatever reason, the Tales story took place in continuity before the relaunched book (there was a delay after the first New Teen Titans got renamed), and so this trade collects ten issues of the secondary book, featuring work by a few different artists.

From the cover, it’s obvious that this trade also contains Donna Troy’s wedding to the much older, and slightly smarmy, Terry Long.  I’m sure I’m going to have some things to say about that by the time I get to the end of this volume.  Past that, I’m coming into this one with few preconceived notions or expectations.  By this point, Wolfman has the team dynamics down, and I’ve come to like the cast a great deal.  I see Deathstroke returns in this volume, which is appealing.

So, let’s see what there is to see…

There was a steady decline in the quality of this volume, as the book went from being the focus of Wolfman and Pérez’s entire run to being the secondary title, filling in some gaps before the relaunched higher-quality book, with the higher-quality art, began.  We went from the beauty and quality of the wedding issue to some bizarre stuff featuring little known and unnamed characters, through the emotionally wrenching issue that had Gar confront Deathstroke, to a third or fourth outing against a poorly conceived team of villains.

I loved the wedding issue, and trying to identify all the Easter Eggs hidden in it (which is hard from this vantage point).  Pérez was at his best on that issue, and because these characters have been growing on me, I enjoyed seeing them having fun for a change.

The storyline about Lilith and the winged alien made little to no sense to me.  Having not been a longtime Titans reader, I had no idea who Lilith was, and thought it odd that nothing was done to introduce her, given the vast disparity in popularity between this book when it came out, and the issues Lilith was in.  I also thought the whole thing about her falling in love with Azrael, whose name I had to look up online, was very poorly handled.  I had no idea how these two could be in love, nor did I care what happened to either one of them.

I like that Cheshire started to become a more established character in this book, and that the groundwork regarding her daughter was laid here, but the rest of the Qurac stuff left me cold.  I don’t like the way Adeline Wilson is suddenly a superspy leader of an independent all-female spy agency.  It would have made more sense to make her a government agent.

Deathstroke’s trial was goofy at first, but as Gar was forced to confront his anger and sense of decency, it got a lot better.  The issue where Gar and Slade sit in the diner and talk is one of the most nuanced I’ve read since starting this whole Titans project (regular comment Chris Ulichney said this would be a favourite, and he was right).  I like the idea of Gar becoming a more mature and thoughtful character, and hope that Wolfman doesn’t backtrack too much in subsequent volumes.

The stuff about Vic changing his appearance was also pretty goofy.  I’m not sure how any plastic in the 1980s was going to look and feel like real skin, but I also don’t buy the notion that covering cybernetic parts with plastics is going to be rejected by the human part of his body.  I guess Wolfman needed Vic to make peace with his appearance, but I’m not sure I bought any of it.

The Fearsome Five are terrible villains.  None of them look cool, and they are just too powerful to be trying to take over a city for unclear ends.  Psimon is such a powerful character that there needs to be a reason for ineptitude.  The same holds for Shimmer.  I didn’t buy Jinx wanting to join the team, and her powers are never established, but more than enough to take down the rest of the team after Jericho took control of her.

So, in the final analysis, this was a mixed bag of a very inconsistent trade.  You would think that the general lack of Raven would have made me happier with it, but…  After Pérez left the book, the art really went downhill quickly, with the exception of Ron Randall’s work on issue 58.  Rich Buckler’s work is serviceable enough, but Chuck Patton’s is pretty poor, or at least, was very rushed.

I’ve only got one more trade in this series left on my bookshelf, but luckily, it’s the one that features the first issues of the deluxe format book, which I assume got a lot more attention paid to it than the later issues of this trade did.  I guess we’ll find out next time.