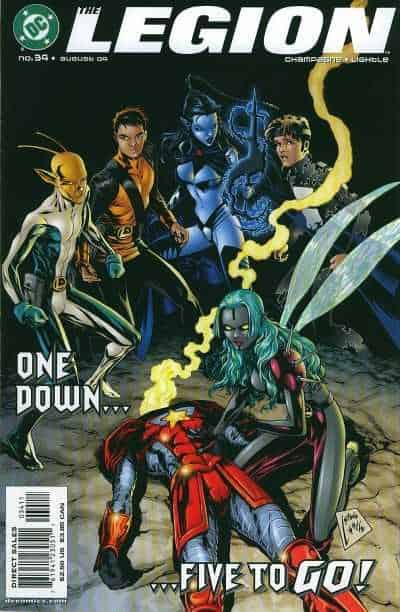 Spoilers (from sixteen years ago)

After Dan Abnett and Andy Lanning left this book (or were asked to leave – the “threeboot” relaunch came about pretty quickly, and was likely planned at this point), The Legion only lasted another five issues, with a fill in by Champagne and Lightle, and then a four-parter by Gail Simone and Dan Jurgens.

I probably could have not bothered with these issues at all, which I didn’t even remember owning or reading, but I’m a completist.  This also gives me a place to sum up my thoughts on over a year of daily Legion reading.

So, let’s see if there is anything to these comics or not…

And that is one crappy way to end off a pretty good series.  I was really enjoying The Legion under Dan Abnett, Andy Lanning, and Chris Batista, but for whatever reason, the people in charge at DC decided to not end this run on a high note, but to instead drop five more issues into the universe, despite the fact that they added nothing to the book, nor did they wrap up any lingering plotlines from DnA’s run (like the question of why Cub was growing rapidly or what was up with Star Boy’s powers).

I’m not sure why DC decided to cancel this run and proceed with the Threeboot – the radically different vision of the Legion put out by Mark Waid and Barry Kitson, which eventually incorporated Supergirl, and then ended up falling into more traditional Legion territory with a run by Jim Shooter and Francis Manapul.  I have no desire to revisit the Threeboot, and so my long, long run of columns on the Legion ends with this one.

I started this massive project, reading an issue of The Legion of Super-Heroes (or an associated title) every day, at the end of July 2019.  For more than a year, I’ve immersed myself in twenty-three years’ worth of Legion stories.  I started with the beginning of Paul Levitz’s long run in 1978, through the move to the deluxe format series, which ended when Keith Giffen transitioned into the Five Year Gap Legion, which remains one of my all-time favourite runs in all of comics.  After that, the Legion sucked for a while, before the reboot was forced on the team after Zero Hour.  Those comics were alright, but largely mediocre.  It wasn’t until DnA took over, ended the main Legion book and Legionnaires, moving the action into the Legion Lost, and then Legion Worlds series, before launching this volume, The Legion.

Since then, the concept went through the Threeboot, and then the original Legion was brought back, in a way, by Geoff Johns, before ending up lost on Earth in the New 52.  Most recently, after a long fallow period, Brian Michael Bendis and Ryan Sook have brought the team back in a run that I’m enjoying.

Except, I really miss the “real” Legion.  Levitz’s run, with artists like Giffen, LaRocque, Lightle, and Giffen again, was mature, exciting, and managed to juggle the large cast of the book.  Giffen’s run with the Bierbaums was brilliant, but after he left, amidst all the confusion around the SW6 version of the Legion (were they clones?  were they the original Legion?), things really fell apart, and the team never regained its glory.

I understand why the Legion, with its strong roots in pre-Crisis continuity, had to change, but the constant tinkering with the team really hurt it.  Giffen came up with some great workarounds, introducing characters like Kent Shakespeare and Laurel Gand (why are these two not in Bendis’s run?) to take on some of the roles in the team’s history, but this constant need to “fix” things continuously made the book not work.  And then, once they had the history the way they wanted it, they’d go ahead and connect the book to the 20th century again, thereby guaranteeing another retcon down the road.

In that sense, reading this book in this way offers an interesting view in the confusing and turbulent history of DC comics, land of the rework.  I find that this is why I don’t feel the connection to DC characters now that I continue to feel for many Marvel characters.  I’m lost in the current DC Universe, and while I like some of their books, I find myself drawn mostly to the titles that don’t have any real continuity to them.  The characters that I grew up with are gone, and that’s fine, but it was a real treat to revisit “my” Legion, and then optimistically stick around longer than was necessary, with the reward being the excellent DnA run.

Reading through these decades also provides some insight into how comics themselves changed.  It felt like Levitz, and some of the writers that preceded him, were pushing the envelope for their time.  They had long storylines, complex character relationships, and showed the characters growing up.  As comics became more mature, that was reflected in the Legion, which balanced a utopian vision of the future with interpersonal drama and superheroics.  Towards the end of Levitz’s run, as DC entered its long affair with being grim and gritty, Levitz and Giffen trashed the place.  Giffen then spent a few years exploring the detritus, while making the book one of the most complex and challenging books on the stands to not have a “for mature readers” warning.  In many ways, Giffen’s Legion was more mature than some of the pre-Vertigo books were.  After the reboot, there was a desire to be all things to all people, kind of like 90s comics in general.  On one hand, they tried to appeal to younger readers, but then would constantly destroy worlds or kill off characters.  As the team moved into the 2000s, it found a balance, and became interesting and compelling again, like a lot of other DC books.  So what did they do?  They wrecked it again by forcing the Threeboot onto the world, at a time when mainstream comics first started to embrace the cancel and relaunch cycle as business as usual.

Should I say anything about the actual issues this column is about?  Dan Jurgens has never been a favourite artist of mine, and his approach to these characters was all wrong here.  He made them look like the early 20s versions of themselves that we saw at the tail end of Mike Grell’s 70s run, with their leisure suits.  He was a poor choice for this book.  Likewise, Gail Simone was more interested in reporter Trudy Trusoe and Devil than she was in any of the actual Legionnaires.

Well, that wraps up my extended stay in the 30th and 31st century.  As a bit of a palette cleanser, I want to dive into a few short titles from the dawn of the miniseries before diving into another team book, but one made up of second string characters, far from the action of superhero-crowded New York.

If you’d like to read any of these issues, you’re going to have to go digging.  These are never getting collected.