– I’ve been looking forward to this series since it was first solicited.  Alex Paknadel has become one of my favourite writers, with his Turn Coat being a recent favourite of mine.  Giga is set in a world where giant robots that used to fight one another have become both home to and object of worship of humans.  The main character, Evan, used to be on track to joining the priesthood, but after a catastrophe that he had information about but didn’t share, he was excommunicated, and now lives a scavenger’s life, made more difficult by his reliance on a wheelchair.  Most of this issue is given to introducing Evan and his robotic friend, who is in need of some repairs that require Evan to go somewhere dangerous.  John Lê’s art is very nice, and Rosh’s colours are lush.  I’m glad I ordered this book, and look forward to seeing where it goes.

Ascender #14 – Lots of surprises in this issue, as Andy finds himself in a hidden village just as Mother’s armies find it, and on Phages, Bandit’s purpose is revealed, which leads to the return of a character from Descender.  Jeff Lemire and Dustin Nguyen continue to do great work with this series, which I am enjoying immensely. 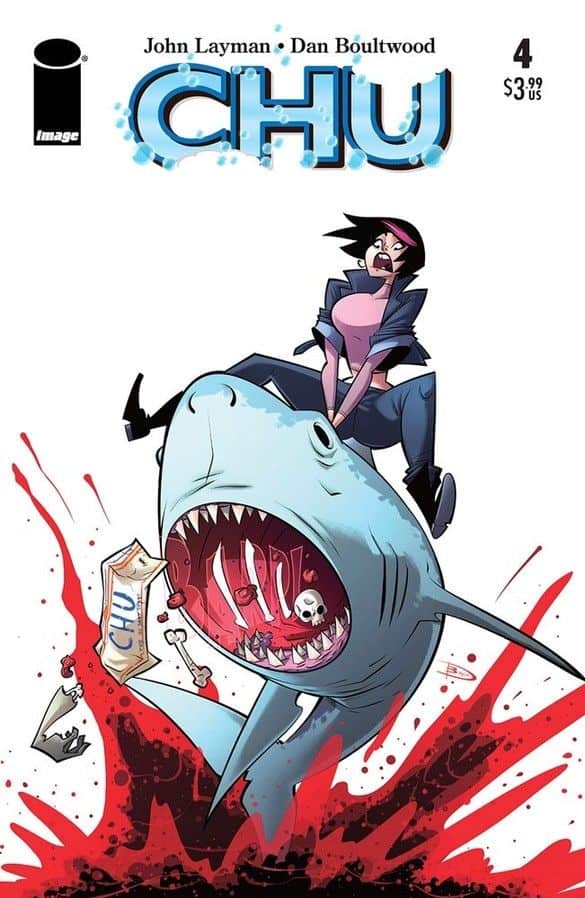 Chu #4 – The longer this series continues, the more I like it.  It’s the typical comics nostalgia trap – I didn’t realize I was missing Chew this much, but unlike the umpteenth relaunch of a mainstream book, this feels different enough that my interest is completely rekindled.  I like that Tony is not the main character of this book, and that there was still so much about him we’d never learned.

Colonel Weird: Cosmagog #1 – Colonel Weird is my least favourite of Jeff Lemire’s Black Hammer characters, yet I still decided to pick this miniseries up, knowing that it would be full of disjointed scenes.  Why?  Mostly because Tyler Crook is handling the art for this book, and I figured that he would be able to keep things interesting.  This first issue raises way more questions than it answers, but my hope is that we will get a better understanding of Weird, and I might like the character more by the end of it.

The Department of Truth #2 – I’m still curious about this book, about a secretive government agency that investigates conspiracies that end up shaping the world.  Our point of view character has a weird moment in his past, connected to the 80s “Satanic Panic”, which seems to be making its way back into mainstream thought through Qanon nonsense.  I’m curious to see where James Tynion IV is taking this book, and while I find Martin Simmonds’s art a little dull, I’m going to keep with this at least for the first arc.  I miss these mid-stage Vertigo style books. 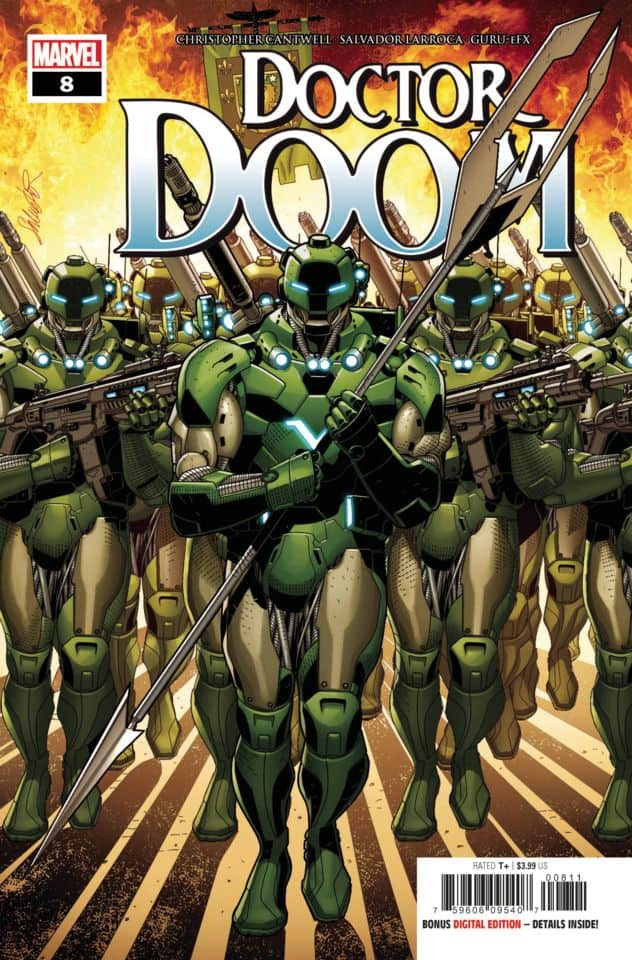 Doctor Doom #8 – This was a strange issue, as each page was either a full splash, or part of a double-splash page, and it relied heavily on narration to move things along.  I suspect that this book has been cancelled (it’s not in the latest Previews), and so Chris Cantwell is rushing through the story beats he’s laid out.  It’s too bad, because I was enjoying this book, but now my enthusiasm is waning.  It’s also odd how out of step this book is with most of the rest of Marvel continuity.

Immortal Hulk #39 – The Leader’s connection to Banner’s father is revealed, as things get even more psychological.  I like the way Al Ewing has built on Peter David’s landmark work with the Hulk as an abused child, while also making this book stranger and more unpredictable than ever.

Lazarus: Risen #5 – It’s been a long time since we got an issue of Lazarus, but I quickly felt caught up as Greg Rucka and Michael Lark are such master storytellers.  This issue progresses the war, with Forever going after the heads of the Morray and D’Souza families, in part as revenge for what happened with Joaquim.  We also see Forever’s first meeting with her younger counterpart, as they start to scheme together.  This series has been running for a long time (the Risen “quarterly” is a relaunch) and continues to provide complex and rich comics, showcasing a world that seems increasingly prescient.  It’s great stuff.

– It feels like a lot of the introductory stuff is finally out of the way, so Brian Michael Bendis is starting to explore his larger storylines.  We see the 31st century version of Oa, get some more hints about the Great Darkness, and follow as the Legion investigates Mordru’s disappearance.  We also get to visit New Krypton, learn a little more about Mon-El and his family, and see who the next big threat is likely to be.  I kind of hate that Bendis is tying this book closely to his work on Superman, because I didn’t read that run at all, and because I hate when everything in the 31st century is dependent on the 21st.  I do like that he’s finding space and time to build some of these characters; the balance in this issue reminds me a little more of the classic Legion comics, that successfully juggled a couple dozen characters.  Ryan Sook’s art continues to be very impressive as well.

Sex Criminals #69 – We return to the world of Sex Criminals for one last issue, set a few years after the last one.  Dewey and Bud are rich and famous now, and they bring the old gang back together for their wedding, on a private tropical island.  We get to check in on a number of favourite characters, but of course, the heart of this issue is Jon and Suze seeing each other for the first time in a long while.  It’s a touching issue that helps remind me why I fell in love with this book in the first place – the exceptional character work, and the sensitivity with which it portrays complicated people.  This series has been remarkable – it’s a wildly funny humour comic about people with sex-based superpowers that also became the most affecting portrayal of sexuality, mental health, and relationships that I’ve seen in any form of media.  The letters page became a haven for all sorts of honest and frightening discussion, and I honestly believe that this comic helped change a lot of peoples’ lives.  It’s an incredibly rare book, and I’m so glad that I’ve been with it since the first issue.  I am going to miss it a lot.

– The first arc of this latest Aphra title ends, while setting up the next one.  I’ve enjoyed this book, but find it’s not as complex as it was when Kieron Gillen and Simon Spurrier were writing it.  I like my Aphra a little more devious and cold-hearted than she’s been here, although I did like watching her manipulate things in this issue.

Tartarus #6 – When this series began, I thought it was odd that the entire first issue spent so much time developing Surka, a notorious criminal, and Hisa, her most recent jailer, only to kill them by the end of the comic.  Now, with this second arc, we learn that they didn’t die but were transported to a far-off place, and this issue gives us a look at the beginning of the seventeen years that have passed.  The two women, who neither like or trust each other, have to depend on each other to survive being stuck in a desert without food or any idea of where they are, and thanks to Johnnie Christmas’s great writing, it’s a solid story.  This arc features art by Andrew Krahnke.  I miss Jack T. Cole’s work here, but Krahnke does a fine job, and I’m hoping that Cole will return for the third arc.  I’m very pleased to see that this series is continuing; I’d assumed it would end with issue five.

– I’ve decided to just give up on trying to understand the wider plot of this comic, and treat it a bit like a Michael Bay movie, only with good characterization, and ride along with it.  Charles Soule and Scott Snyder have crafted a very weird story, but it’s entertaining.

X of Swords: Stasis (X of Swords Pt. 11) – We reach the halfway mark of Jonathan Hickman’s epic X-Men crossover event, and finally get introduced to the ten swords of Arakko, and their wielders, as Krakoa’s champions move to Otherworld to prepare to do battle.  In typical fashion, Hickman is very concerned with arranging pieces on the chessboard, while cowriter Tini Howard gives us more of Saturnyne, who I continue to despise.  Hickman excels at designing odd worlds, and finds some odd characters for the upcoming sword fights (I think he’s even tossed in some characters from his Image series Decorum), but doesn’t put a lot of heart into the book.  Howard attempts to do that as Apocalypse is reunited with a character he hasn’t seen for millennia.  I think this issue is good, but I’m still struggling with the structure of this story, which feels more and more like a video game plot to me.  I am looking forward to these battles taking place though, and am surprised to see that eleven chapters have gone by so quickly.

Kamaal Williams – Wu Hen – This has taken forever for the physical copy to make its way into my hands; I’d forgotten this had even come out.  Kamaal Williams is an incredible keyboardist, part of the explosive London jazz scene, and the mind behind Black Focus records.  Wu Hen is a fantastic album of beat-heavy jazz music that is perfect to just vibe out to.  This is the sound of jazz’s future.

Mary Lattimore – Silver Ladders – Mary Lattimore’s lush harp music feels a lot more pared down on this album, as she weaves more electronics into the mix.  The album is produced by Neil Halstead, of Slowdive, and that might explain why it’s so different from Lattimore’s last record.  I still really like it though – she has a very beautiful approach to this kind of music.

Paradise Cinema – Paradise Cinema – This recording on the Gondwana Records label is a new project spearheaded by Jack Wylie, of Portico Quartet and Szun Waves.  He traveled to Senegal and recorded percussion on saba and tama drums with a pair of local artists, and then added to that music.  It’s got a quicker pace than a lot of his other projects, but is lovely and slightly trance-inducing.

Mammal Hands – Captured Spirits – Gondwana Records releases all fit into a very similar space, and this jazz/electronic album is no different.  Mammal Hands’ newest is a good example of the kind of relaxing and alluring music this label is known for.  It’s good stuff.