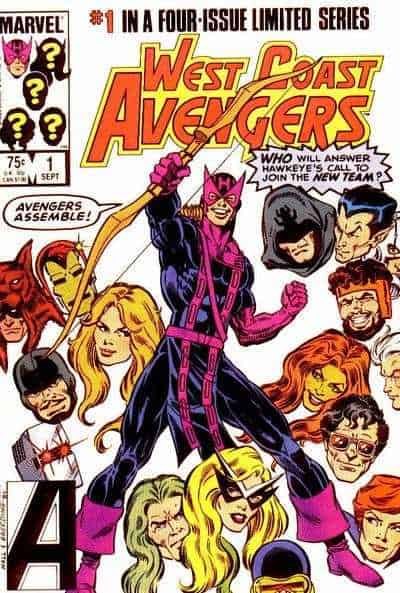 Spoilers (from thirty-six years ago)

There is a strange potential in farm teams.  There was a time when I wanted to know way more about Beta Flight and Gamma Flight than I did Alpha Flight.  And, when the Avengers started a secondary team, the West Coast Avengers, I was very excited.  The idea of Hawkeye leading his own team sounded pretty wild back in the day, as he didn’t seem like the leader type.

I remember looking at this first issue, and being excited that I could recognize most of the floating heads on the cover.  I also remember looking at the different characters, and imagining how cool this team might have been had it included people like Rom and Leonard Samson.  Even still, I was more or less happy with the lineup that solidified around Clint (although I’ve never been a fan of Wonder Man).

I remember liking this book a lot, and I’m curious to see how it holds up against my memory of it.

This was a pretty solid little miniseries, and it worked well to establish this team and what makes it different from the main Avengers book.

Clint undergoes some real growth in these four issues, as he embraces his role as team leader.  I like that Stern had him looking back to how he was when he joined the Avengers, and working to be a better team player and leader.  His enthusiasm for this team is nice to see, and it’s cool to watch him learn how to navigate team dynamics and other things that he never would have paid attention to before now.

Bobbi doesn’t do a whole lot in this miniseries, but it’s clear that she’s a capable hero with a lot to bring to the team.  A lot of her time is spent supporting Clint in his role, which doesn’t age great, but it’s all good.

I like the uncertainty that James Rhodes shows about being Iron Man on the Avengers, instead of as a solo act.  It’s a little odd that, even when he’s in the suit, no one could tell that they weren’t dealing with Tony Stark, but it’s comics, so I guess we have to allow that.  I like Rhodey as Iron Man a lot, and his inclusion on the team gives it both a sense of continuity, having a recognizable founder, and newness, given that Rhodey is effectively a stranger.

Tigra really doesn’t do a whole lot in this miniseries.  Basically, she punches Graviton once, and that’s pretty much the extent of her being a hero here.  Including her in the first place was an interesting choice, as I don’t imagine she ever had a ton of fans, but I like that she was also aware of how out of place she was.

I’m not a big fan of Wonder Man, mostly because of his long history of having the worst costumes in the game.  He’s a true powerhouse, but he somehow always gets relegated to secondary positions, suggesting he’s just not a very competent hero.  His obsession with letting the Blank get away doesn’t really fit his character, but I guess it’s a necessary plot device to get him to go look for him again.

There are a few things that I found odd about this book that I never noticed before.  The Vision’s stated reason for starting the farm team on the west coast was because too many heroes wanted to be Avengers, in the six-member lineup era, but then he had to go out and recruit ⅗ of the team.  I know there were other reasons that became revealed when the Vision lost control, later in the main series, but that just really stood out to me.

I also think that it’s odd that the team has this massive compound in LA, yet no staff.  The mainstream Avengers couldn’t manage a simple New York mansion without Jarvis, but I guess Bobbi is expected to do the cleaning here.

These are very capable comics.  Stern was always one of the great Avengers writers, and he had the formula down perfectly here, as the team assembled and started to get to know each other.  Bob Hall is, likewise, a classic Marvel house style artist, who did a perfectly fine job with this book.  I thought The Blank looked very cool, and would have liked to see him return at some point

I remember being really excited about these comics, at a time when a second ongoing title featuring someone other than Superman, Batman, or Spider-Man was a huge deal.  That feeling came back a little, as I got swept up in the promise of this book.  I’ve also loved the cover to #2 for a long time, and thought it was cool when Kelly Thompson’s recent WCA title paid homage to it.

It wasn’t too long after this series ended that the WCA came back in their ongoing title.  I remember loving that book, but not its art.  That’s where I’m headed next, but I’m also going to read the second Vision and Scarlet Witch miniseries that it crossed over with at the beginning, as that duo became increasingly important for the west coasters.

If you’d like to read this series, you can follow this link for a trade paperback that includes it.
Avengers West Coast Epic Collection: How the West Was Won