The Weekly Round-Up #571 With We Only Find Them When They’re Dead #3, Oblivion Song #28, Resident Alien: Your Ride’s Here #1 & More Plus The Week In Music 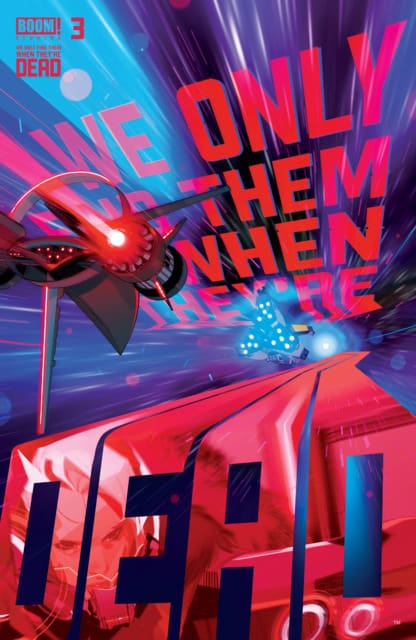 We Only Find Them When They’re Dead #3

– I am very excited about this series by Al Ewing and Simone De Meo.  The crew of the autopsy ship has fled into the void between galaxies, trying to find out where the massive dead gods they make their living cutting up and selling, come from.  They are being pursued by a very focused cop, who has history with the ship’s captain.  Ewing makes most of this issue about strategy and the attempt to get away, so some of the events at the end of the issue come as a big surprise.  I like Simone De Meo’s art, but still find that the colouring makes some of it hard to see.  Still, this is a great and unique series.

Iron Man #3 – I’m liking this run, although I find it odd that I’m enjoying Patsy Walker much more than I am Tony.  Is it possible to write a likeable Tony Stark these days?  It’s been a long time since he’s been more than the sum of his tropes, and I’m not sure there’s a lot more that can be done with the character.  Cafu’s art is nice, and I like how some old school villains are being used (although I find it hard to believe that the Gladiator is operating again.

Marauders #15 (X of Swords Pt. 14) – I find myself enjoying the dinner party that Saturnyne has thrown for the Krakoans and Arakkans so much, that I don’t actually want to get to the fighting.  Like last week’s issue of Marauders, this one is a lot of fun.  Logan’s plan goes to pieces in a hurry, but when one of the Horsemen tries to poison him, that goes badly too.  This was a great interlude before the action starts in earnest.  I hope that Isca, the Unbeaten, becomes a regular character somewhere.

Excalibur #14 (X of Swords Pt. 15) – Tini Howard’s chapters of this event are among the strangest.  Captain Britain enters the first fight, with Isca the Unbeaten, and that doesn’t last too long, although it’s ending is also kind of ambiguous.  Doug’s up next, but his challenge is just strange, as the event veers a little towards comedy, and I felt, the focus was lost again.  Phil Noto drawing this chapter was a nice surprise, as I really only expected him to be on the Cable issues.

Oblivion Song #28 – Things keep heating up in this book, as the Kuthaal begin their invasion of Earth.  Robert Kirkman has spent two years building up these characters, so now that things are changing so severely, it reminds me of the excitement I felt at key moments of The Walking Dead when you knew that Kirkman was going to upend everything.  This book is a real gem.

Rai #9 – I like this current arc in Rai, where both Rai and Spylocke are finding themselves in new conflicts, and potentially being tricked by Father or his offspring.  This book has some faltering early steps, but it’s catching up nicely now.

Resident Alien: Your Ride’s Here #1 – It’s so nice to slip back into Peter Hogan and Steve Parkhouse’s fantastic science fiction murder mystery series.  I’ve enjoyed this storyline since it began, and am excited to see that Doctor Harry gets a six-issue run this time around.  I assume that this will be the last of the Resident Alien volumes, as we have all sorts of signs suggesting that our kind small-town doctor is about to be revealed as the alien he is.  It’s cool to see that this series has been adapted for television – I think that it’s a good choice for a visual project like that.

Star Wars: Darth Vader #7 – Vader is left rebuilding himself on Mustafar, when an assassin sent by the Emperor comes looking for him.  The character design for Ochi of Bestoon is excellent, as is all of Rafaelle Ienco’s art in this series.  I wish this issue wasn’t quite so decompressed, but I liked it still.

– Okay, things are getting even weirder, as some of Saturnyne’s contests are not sword fights at all, but are arm wrestling matches and drinking games.  Even though this issue is written by Gerry Duggan and Ben Percy, who did so well with the two issues of Marauders (see above), I don’t think I liked this issue all that much.  It’s clear that Saturnyne is intending to sway the whole tournament in Arakko’s favour, but it’s not clear why.  I think there are only a couple of weeks of this event left (and six more chapters), and I hope that things tighten up again.  I don’t know why so much time and energy was spent on these swords, if we’re not even going to see them get used. 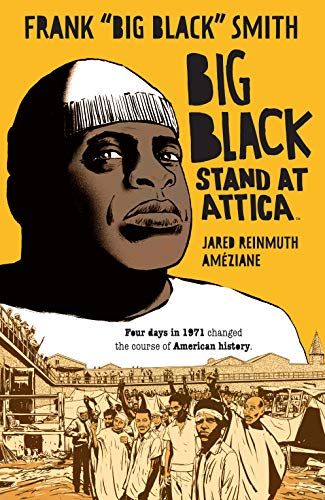 – I really liked this first-person chronicle of the prison uprising in Attica in 1971.  I’ve always known the broad strokes of the story, but this is the first time I’ve dug into what actually happened there, and how so many prisoners and their hostages ended up dead.  Our narrator is Frank Smith, called Big Black, who ended up working with the riot leadership during the standoff with the authorities, and who was tortured by guards after they retook the prison.  Later in life, after being released, Smith worked towards helping other convicts, and at some point before his death, told his story.  The comic is made by writer Jared Reinmuth, although Smith gets the lead credit, and drawn by Améziane, who uses a few interesting styles.  This is a good and important piece of history, and at a time when there is more serious discussion of prison reform and abolishment than we’ve seen before, it’s important to understand the history of how calls for reform have been treated in the past.

Future Islands – As Long As You Are – I’ve never really cared for Future Islands before now, but I’ve been a fan of frontman Sam Herring ever since he sang some songs with BADBADNOTGOOD.  I also really like his hiphop work under the Hemlock Ernst name.  I thought it was time to give the band another chance, and this album really works for me.  It’s got a lot of 80s synths on it, and Herring’s voice and songwriting are fantastic.  I wonder if I need to go back through the back catalogue now…

Hugo Kant – Far From Home – I stumbled upon this album of instrumental triphop from France, and I really like it.  Kant’s style definitely has a French feel to it (but not as much as, say, Wax Tailor), but he creates some cool soundscapes.  I love discovering new artists like this.

Siul Hughes – Hueman – Sometimes, it’s time for that old fashioned, straight up hiphop.  Siul Hughes comes out of Maryland, and is on Ceschi’s Fake Four label.  This is a solid album, with a track that references Dragonball Z, and some very nice beats.  It’s good stuff.

Machinedrum – A View of U – This album takes me back to the days when jungle and drum and bass music were mainstays in my CD player.  Machinedrum takes these classic sounds and drum patterns, and humanizes them through the use of some clever samples, and great features.  Freddie Gibbs rides one track, while another has a collaboration with Tigran Hamasyan, the guy who is pioneer metal jazz piano.  There are a lot of cool surprises on this album, and at times, I thought I was listening to a different project entirely.