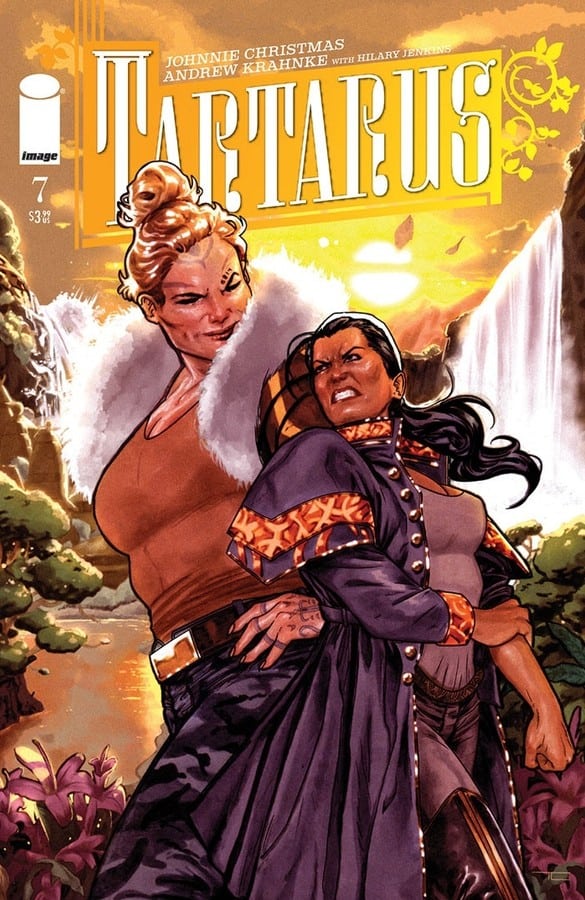 Tartarus #7 – We continue to see what happened with Master of Locks Hisa Ikeda and her prisoner, master criminal Surka, when they found themselves transported to a strange world, where a community of peaceful people live long and easy lives.  The two have been chained together, and while Hisa remains wary of everything, Surka appears to embrace the lifestyle of her new friends.  Of course, Surka is pretty evil, and it’s not long before things start to fall apart.  I really like the way that Johnnie Christmas writes these two characters.  Hisa is a study in what it’s like to be someone with a strict sense of duty, who finds that all the structures she’s devoted her life to are gone, while Surka is one of those great, sociopathic characters.  This arc has a very different look, feel, and tone to it than the first one, and I think that’s great.  It helps broaden and enrich the world Christmas and his artists have built.

Colonel Weird: Cosmagog #2 – Stories about non-linear characters can be hard to follow and sometimes very frustrating, but with Tyler Crook drawing the hell out of it, it’s all good.  This strange journey through the many aspects of Colonel Weird is confusing, but also very lovely. 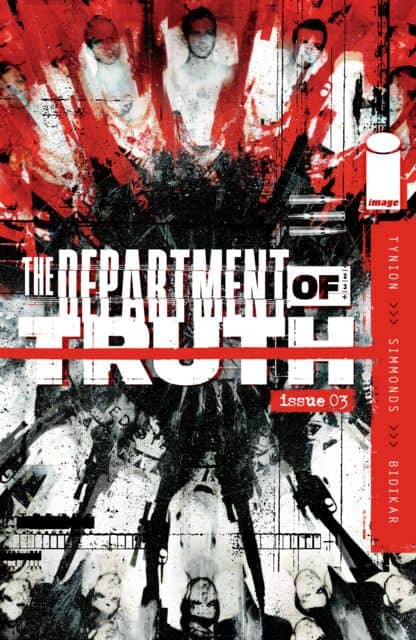 The Department of Truth #3 – With this issue, we get a better idea of what the Department of Truth spends its time doing.  A woman whose child was killed in a school shooting is beginning to believe in the rumors that the incident was a false flag event, and that she might be a “crisis actor” paid to take part in it.  Our main characters have to investigate and deal with this before it becomes a part of reality.  I like the approach that James Tynion IV is taking to this series, although I still find Martin Simmonds’s art a little off-putting and impersonal.  I wonder what Qanon types think about this series.  I hope they hate it.

Doctor Doom #9 – The last issue of this series was very weak, and felt like writer Christopher Cantwell was trying to squeeze two or three issues into one.  Things are back on track with this issue, as Doom turns his gaze towards fixing the black hole near the moon that threatens the Earth.  A good luck phone call from Reed Richards sends Doom spiralling though, as Cantwell starts to make it very clear that Doom’s bravado and self-confidence are all masks for a very fragile sense of self.  This book is suddenly back on track, and in line to be remembered as an important look at one of the most pivotal characters in the Marvel universe.  I don’t know what happened with #8 (I still suspect that this run has been truncated), but I’m much happier with the book again. 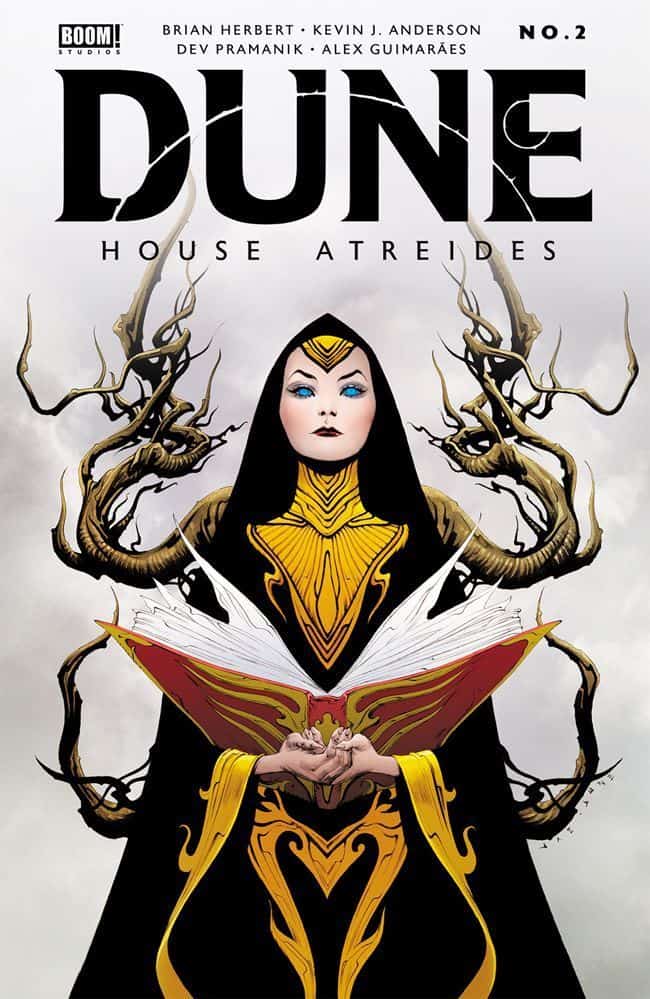 Dune: House Atreides #2 – We continue our look around the Dune Universe in this prequel, that introduces some new (yet old) characters, takes us on a sandworm hunt, and starts to make clear how vicious the Harkonnens really are.  I like the feel of this book, but am not quite sure what the plot is going to be yet.  I like Dev Pramanik’s art here, but wish it was a little more cinematic.

Legion of Super-Heroes #11 – Brian Michael Bendis has a number of plotlines running now, but still finds the time and space to squeeze in some character work, and to set up future storylines.  I’m impressed with this series – Bendis seems much more focused than he was with his team books at Marvel, and really accomplishes a lot with each issue.  Having not read any of his Superman books that didn’t have the Legion in them, I’m not sure if the revelation of the villain at the end (who we also saw last issue) is a big deal or not, but it’s all good.  Ryan Sook’s art is so nice in this book, and I’m really starting to like these new takes on the classic characters.

Scumbag #2 – As I don’t read solicitations for books I know I want to buy, I didn’t realize that each issue of Rick Remender’s newest series would have a different artist on it.  Andrew Robinson draws this issue, which has Ernie, the titular scumbag who has stumbled into having powers, and is the only person that can stop a right-wing terrorist organization, stumbling his way into action for the first time.  This series is amusing, but also kind of spot on in its portrayal of a Cobra-like group that feels like it came right out of today’s headlines (as I type this, we are on day three of a city-wide fascination in a BBQ joint that insists on opening despite our city being in lockdown, and which attracts a crowd that could easily be characters in this comic).  It’s very prescient satire, and it’s fun to see Remender go nuts with it.

Star Wars: Doctor Aphra #6 – We left Aphra as a target of Domina Tagge last issue, and this issue already opens with her in the very rich woman’s custody.  I’d hoped for a bit of a cat and mouse thing for a while, but now we’ve got Aphra about to embark on a job for the very intimidating woman.  This newest Aphra series is lacking in the rich supporting cast (I mean Triple-Zero) that made the first run so delightful, but it looks like the next issue is going to include a familiar character who might make things more interesting.  This run is not bad, but it’s definitely not as interesting as the one that came before it; I feel like Alyssa Wong is nor working on Aphra’s character the way Gillen and Spurrier did with their runs.

Undiscovered Country #10 – There is an attack on Unity that allows some of the party of heroes to see this odd region of America at its best, while Ace and the reporter discover the real truth behind the region’s processing power.  This series makes absolutely no sense if you spend much time thinking about it, but it’s a fun ride.

Vampirella #15 – It’s a rare one-off issue, wherein Vampirella’s plans to resettle in Atlanta, and perhaps live in a hotel, are cut short by the persistence of her new fans, including a pair of ghosts who want to recruit her to get vengeance for their deaths.  This book is written by Chrsitopher Priest, though, so things get weird pretty quick, as Vampirella discovers they aren’t being completely straight with her, and as things tie into recent world events.  Priest’s Vampirella is always complex, and that’s what makes it glorious. This issue is drawn by Madibek Musabekov, a name that is new to me, but it looks very good.  Dynamite seems to be tapping into a fresh stable of artists for this series, many of whom I see becoming big names in the future.

X-Men #15 (X of Swords Pt. 20) – While Apocalypse and Genesis fight the final battle in Otherworld, Scott attends a meeting of the Quiet Council, with plans to put a team together and go rescue his son and the others.  This issue, by Jonathan Hickman and Mahmud Asrar, focuses on how decisions are made in Krakoa, and how the island’s government must continue operating.  I would have thought that bigger things might happen in the final chapter of this big event to take place in the flagship title, but that’s not the case.  Still, it works well to build anticipation for the final two chapters (see below).

Excalibur #15 (X of Swords Pt. 21) – Most of this issue is given over the establishing that the Krakoans in Otherworld are in for a big fight, but just like the other Excalibur issues, this didn’t land the same way the issue above did, even with Mahmud Asrar drawing half of this issue too.  I just kept thinking that it’s odd that we’ve spent twenty issues getting here, just to have everything turn into a big fight, supported by the appearance of a bunch of characters I don’t know anything about (I mean the angel army, not the people who turned up on the last page).

X of Swords: Destruction #1 (X of Swords Pt. 22) – We finally reach the end of this massive event, and I’m left with a lot of thoughts.  First off, this issue is pretty exciting from start to finish, and has some interesting moments, as the fight between the Krakoans and Arakkans expands to include the demons of Amenth, the horde of creatures trying to gain access through SWORD’s space station, and eventually, the X-Men themselves.  Unlike in the Excalibur issue above, each new successive wave of combatants feels like their presence makes sense (although I’m going to admit this whole Shogo is a dragon who can melt reality thing confuses me to no end).  At the centre of all of this is the story of Apocalypse and Genesis, and I feel like the resolution to their plotline is the most satisfying.  What left me scratching my head is what, exactly, is going on with Captain Britain (Betsy Braddock) by the end of this story.  I’m looking forward to seeing how the aftermath of this event plays out in the various X-books in the weeks ahead, and I’m hoping that one of the dead characters is able to come back in pretty much the same form we last saw him in.  I’m also hoping that we’ll get to see some of the Arakkans again.  In the final analysis, I’m left with some questions or unresolved issues with this whole event.  I don’t really see why the champions of Krakoa needed to gather up ten swords that they didn’t even all use, nor can I really figure out why Saturnyne had to be such a big part of this story.  There was a real video game structure to the beginning of this event, and while I was happy to see Hickman bust out of it towards the end, I’m still not sure why he felt it was necessary in the beginning.  I’m also hoping that some of the books that effectively were put on hiatus for this event, like X-Factor, X-Force, and Marauders can regain the flavor that made them unique in the first place once they return to telling their own stories.  It’s been decades since we’ve seen such a tightly-controlled X-Event, and so by those metrics, this was a wild success.  It did create some excitement in me, and I liked being able to read roughly three chapters every week, but I’m also glad this is over with.  I feel like this was not really the big story that Hickman had to tell with his X-Men plans, and am looking forward to seeing what he’s going to start building to next.

Firefly: Watch How I Soar HC

Other History of the DC Universe #1

Fly Anakin & Pink Siifu – FlySiifu – Two artists I’ve discovered in the last year, and admire a lot, are Fly Anakin and Pink Siifu.  This collaboration between them is pretty impressive, as they ride over a variety of lo-fi beats on super short songs.  Aside from the track produced by Madlib, most of the beats come from unfamiliar producers, and work a jazzy style into the album.  The concept behind it is that the two rappers are sitting in their shared record store, and it has that feel to it.

Pole – Fading – I don’t know much about Pole, but this music is dark and atmospheric, but also very beautiful. This is a pretty complicated example of ambient electronic music, and I really like it.