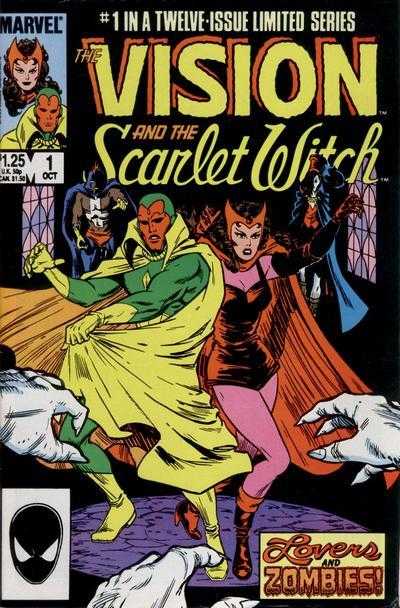 The first Vision and the Scarlet Witch miniseries concerned itself, mostly, with Wanda Maximoff’s parentage, ultimately revealing that she and her brother (at least at the time) were the children of Magneto.  Weirdly, it left that right there.  Eventually, the duo rejoined the Avengers, Vision became the team leader, got influenced by the Titanian supercomputer ISAAC, went mad, and tried to take over the world.

It was probably an odd time to bring the couple back in a twelve-issue series, but writer Steve Englehart had just taken on the West Coast Avengers, and decided to connect the two books for each of their first two issues.  It makes sense, what with Wonder Man, the Vision’s “brother” being on that team.

I remember that this series focused a lot on Vision’s “family” – Ultron, Hank Pym, and Wonder Man – at the beginning, and that it was in this book that Wanda got pregnant in a storyline that still reverberates through the modern Marvel Universe at times.

I remember really liking these stories, but also hating the art of Richard Howell, whose work reminded me too much of older romance comics.  I wonder if my opinion of that will have changed now, with age and maturity.  Let’s see…

This is an odd series, in that it is rarely exciting or suspenseful, but it kept me interested through the whole run, and tried some new things.  I’m not sure that any comic before this tried to marry the romance genre with superheroes, at least for such a sustained amount of time.  Vision and Wanda never do any crimefighting in this run, instead only dealing with threats to their family as they came up.

I like that Steve Englehart took the real-time approach to this book, making each issue after the first few take place a month after the one before, even when that stretched some credulity (such as in the case of Crystal’s coma).  I’d forgotten that this book used monthly holidays as a theme for each issue.  I’d always thought that the Jeph Loeb and Tim Sale Batman series, The Long Hallowe’en, was the first to do that, but it was actually this book.  Has any other comic celebrated tax season, ever?  Clearly, Englehart was breaking ground here.

The family is such a central theme to this comic, and it’s interesting that two characters with some of the most complicated family histories would end up exemplifying domestic normalcy.  Wanda’s confusing parentage was the main feature of the first miniseries, and then this one continued to examine her family relationships.  Quicksilver was established as a villain here, at least for a while (that got picked up in Englehart’s West Coast Avengers later), while Magneto took a few more steps towards his general redemption as a complicated hero (and one of the best characters in the Marvel Universe, then and now).

Vision gained a family in this run, as he embraced being “twins” with Simon Williams, and even managed to get a mother out of the deal (who seemed to take the weirdness of the situation surprisingly well).  This ran parallel with Englehart having Hank Pym work out some of his issues with Ultron in WCA.  Beyond that, Englehart really took time to explore the new ‘human’ Vision.  I like the idea of him being a human mind in a prosthetic body, as it did a lot to help explain the depths of Wanda’s love for him.  Prior to this series, I couldn’t ever quite buy their relationship as being real.

And then there are the children, who at least at this point, appeared to be normal kids, despite the fact that one of them couldn’t be detected by machines or magic.

In addition to the Wanda Vision family, we saw an extended cast that was also kind of interesting, and helped provide a “chosen family” for the oddball couple.  Glamor and Illusion were interesting, and I wanted to see more of them, and what would happen when their friends discovered that they were really thieves.  Holly, as Wanda’s witching apprentice, didn’t add much to the series, and I’m left wondering if there was a larger plan in place for her.

In a lot of ways, it feels like this was meant to be a springboard to an ongoing series, especially since many of the subplots that were started around these secondary characters, including Pietro and Crystal, weren’t entirely resolved here.  I’m not sure if sales didn’t warrant a third miniseries, or if plans just changed, but the ending, while naturally wrapping up the pregnancy, and the Grim Reaper plots, did feel a little abrupt.

Englehart did a fine job writing this book, and each issue was pretty packed with plot, guest characters (was there even a single issue where it was just the two of them?), and continuity stuff going way back.  This wasn’t a particularly feminist comic, but it did give more space to Wanda than she had received before.

If I had anything to complain about, it’s that the art is pretty boxy and underwhelming.  Each panel is fine, but the overall effect of Richard Howell’s art, especially once Frank Springer came on as inker, was pretty deadening.  It seemed like he was more interested in designing Wanda’s maternity clothes than he was in telling a dynamic story.  The book has a very old school vibe to it, calling back to an earlier era in a way I didn’t always appreciate.

As an aside, that I thought about a lot while reading this run, I hate the way Wanda always has a curl caught under her headdress on each side of her head.  It’s made me crazy since I first noticed it, some time before I started reading this run.

Knowing what comes after this book, with Wanda headed for madness first under John Byrne, and then under Brian Michael Bendis, and then being perhaps forever ruined as a character, and Vision heading towards being made unfeeling again by Byrne, before Tom King really does a number on him, it’s nice to see the happiness that they share, and the unbridled optimism that comes with the birth of children.

In terms of timing, this book teetered on the edge of the grim and gritty era of comics to come, and while that made it a throwback at the time, it also makes the book a little bit special, providing readers with the sense that heroes can have happy endings.

I started reading these issues in concert with the West Coast Avengers, where Englehart had a longer run that we are going to be looking at in the my next column.

If you’d like to read this story, it’s available here:
Avengers: Vision & the Scarlet Witch – A Year in the Life