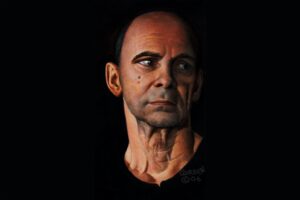 Richard Corben, a titan of visual storytelling, has died at the age of 80. The news comes from his wife Dona Corben, over at the Corben Studios Inc. Facebook page:
.

It is with great sorrow and loss that I must share the sad news that Richard Corben died Dec 2, 2020 following heart surgery. He will be missed tremendously by his family, his friends, and his fans.

Richard was very appreciative of the love for his art that was shown by you, his fans. Your support over the decades meant a great deal to him. He tried to repay your support by working diligently on each piece of art going out to you. Although Richard has left us, his work will live on and his memory will live always in our hearts.

Corben was a supremely talented artist who could also spin a hell of a yarn. He was, in a way, the heart and soul of Heavy Metal. Corben’s Den was the first story in the first issue of Heavy Metal, and in those days when so much was imported from Metal Hurlant he and Vaughn Bode (who died before Heavy Metal began publishing) were the only Americans in the magazine. Corben was, maybe, the most interesting comics artist in America at that time; one of a very few who could be published alongside Moebius, Druillet, Caza, Mezieres, Voss, and other French artists who were challenging the medium in ways Marvel and DC wouldn’t. For a look at Corben’s career in the early ’70s, titles like Slow Death, Grim Wit and Hot Stuf’, check out “Corben Before Heavy Metal.”

Issue 301 of Heavy Metal includes an interview with Corben, conducted in the summer, and it is certainly among the last interviews of his life. “I rather enjoyed my time drawing comics for Warren Publishing,” he told Matt Medney. “Then when the undergrounds appeared, I embraced the freedom of their rebel efforts. I was invited to contribue to the French adult magazine Metal Hurlant. I was happy to be associated with their slick sophisticated appearance, and be showcase with some of the greatest cartoonists who ever lived.”

Corben contributed much to Heavy Metal — “Den II,” “Bodyssey,” “Rowlf,” “The Beast of Wolfton” and more — through the late ’70s, the ’80s, and into the ’90s. After a leave of absence in the early 2000s, Corben returned to Heavy Metal to serialize his story “Murky World,” which concluded in issue 301 with its 15th and final installment.

Though his art is strongly associated with Heavy Metal, and often tagged with the label “adult” because of the abundant nudity of a series like Den, Corben did eventually gain entrance to mainstream comics — he had to, as the market for comics as he drew them had contracted. “I found I had to change my ways or forget the idea of being a cartoonist,” he told us. “Luckily, Mark Chiarello, a senior editor at DC, asked me to do a Batman story for his special Batman Black and White series. I did it and more work followed for DC, Vertigo and Marvel. After I drew some Hellboy stories for Dark Horse, they allowed me to do some of my own projects. Now, I’m independent again, and produce my own comics all of the time.”

For more Corben wit and wisdom, see the interview with him in our August 1981 issue.

Nobody could draw quite like Corben, and there was no mistaking his stories — you didn’t even have to look for a byline. His unique style impressed many contemporaries and inspired even more young artists…

Ob behalf of the IP and Comics Nexus teams, I offer our condolences to the family, friends and fans of Richard Corben.