DC Comics Injustice Vs. Masters Of The Universe Writer and Artist Reunite For Bequest A ‘Dungeons and Dragons’ Fantasy! 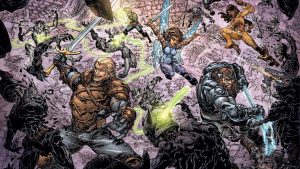 The crossover between the fantasy world and the real world gets increasingly messy in AfterShock Comics’ upcoming series Bequest, as a group of warriors set out to shut down the black market linking the two lands together.

“It’s the story of a band of adventures from a Dungeons & Dragons-style fantasy world who have been stationed on our world to do a very specific job — stop the black market trade of magic items for technology,” writer Tim Seeley (Dark Red, Rightwing) explained when asked about the book’s focus.

“I love fantasy — I spent a good portion of my career drawing The Dark Elfadaptations by R.A. Salvatore — and I wanted to smash together the tropes of that genre with the world we live in today. Our ‘heroes’ are essentially thieves, as they steal treasure. How does a character like that play in modern America, a place teetering between ‘woke’ liberalism and ignorant conservatism?”

The series reunites Seeley with artist Freddie E. Williams II, years after their work together on DC’s Injustice vs. Masters of the Universe.

“Tim and I really clicked when we worked together on Injustice vs. Masters of the Universe, so, even during that project I started asking him if he had some creator ideas that we might be able to flesh out together, and that’s how things got started,” Williams said.

It’s not the only reunion for the artist on the series.

“Jeremy Colwell and I have worked together for the last several years, he’s an expert at coloring ink wash and now, on Bequest, I’ve been pleasantly surprised at what he’s brought coloring my Pen & Ink work,” Williams continued. “It’s cool when you’re working with somebody for years and then they continue to surprise you with the variety of skills. And Mike Marts is an editor I worked with at both DC and Marvel, and it’s awesome working with him again.”

Bequest launches March 17. Keep reading for a preview of Williams’ art from the first issue, colored by Colwell.

Welcome to the high fantasy world of Tangea! A land where wizards and warriors battle dragons in dark dank dungeons! Where thieves pillage ancient ruins and priests answer the au-dible words of their great gods!

Welcome to Chicago, Illinois! Where the magical items from Tangea are being traded on the black market and are messing everything up.

Now, a group of Tangea adventurers must go undercover in our modern world to stop artifacts and monsters from falling into the wrong hands. But how will they fare in a world without
wizards and warriors? A world without heroes?

So do these teaser and preview pages with solicitation intrigue you enough to pick up the debut issue?