Breaking Down Last 10 Of 12 Pages Of Finale As DC Future State Begins and Infinite Frontier EXPLAINED!

The series finale dropped this week. 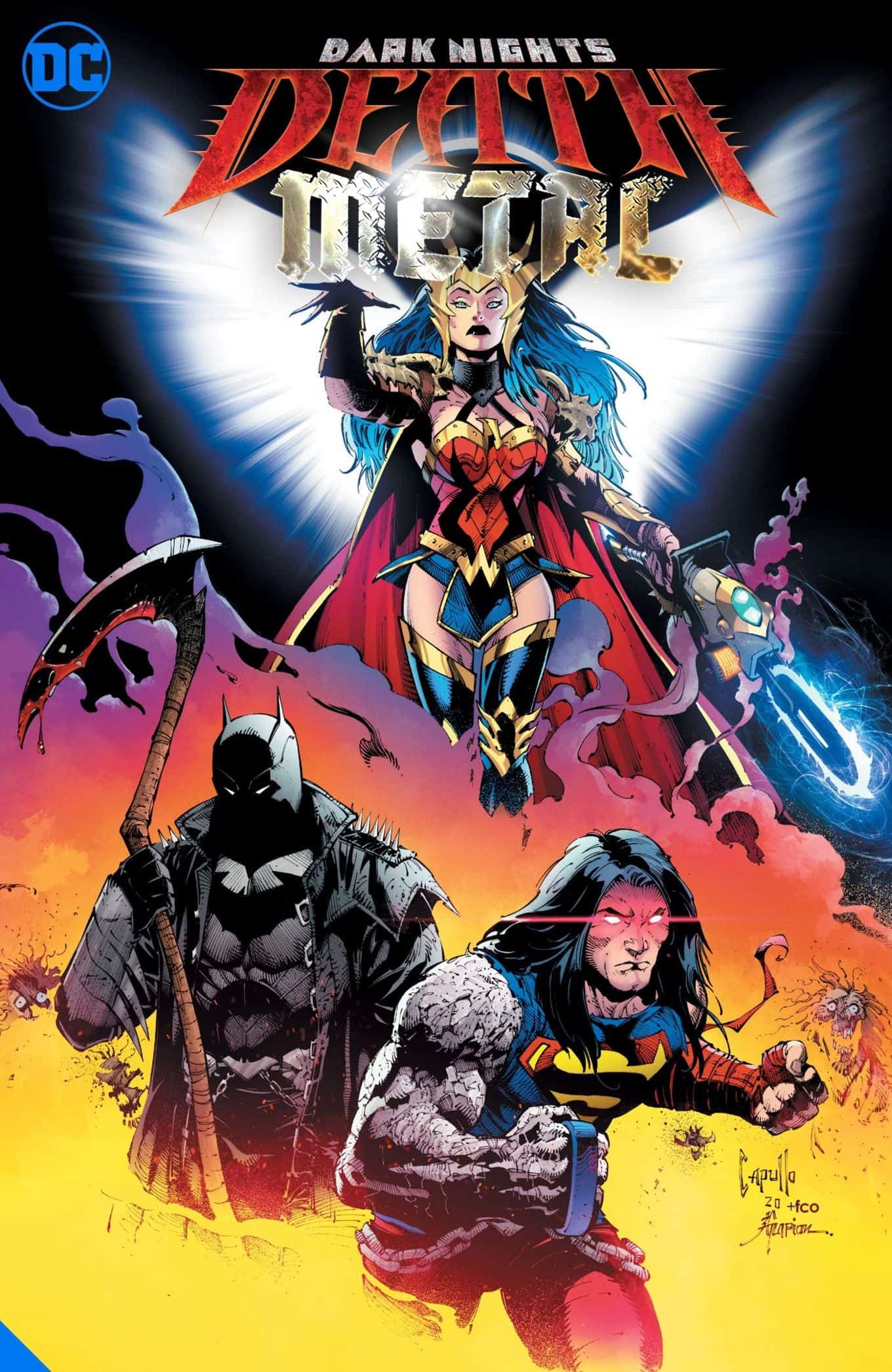 Building on our spoilers-filled analysis of the issue below are the last 10 of 12 pages that ended the book with our additional analysis. We begin with Sgt. Rock who was the character Dark Nights: Death Metal #1, way back in June 2020, opened with; looks like he features prominently in the event finale too. 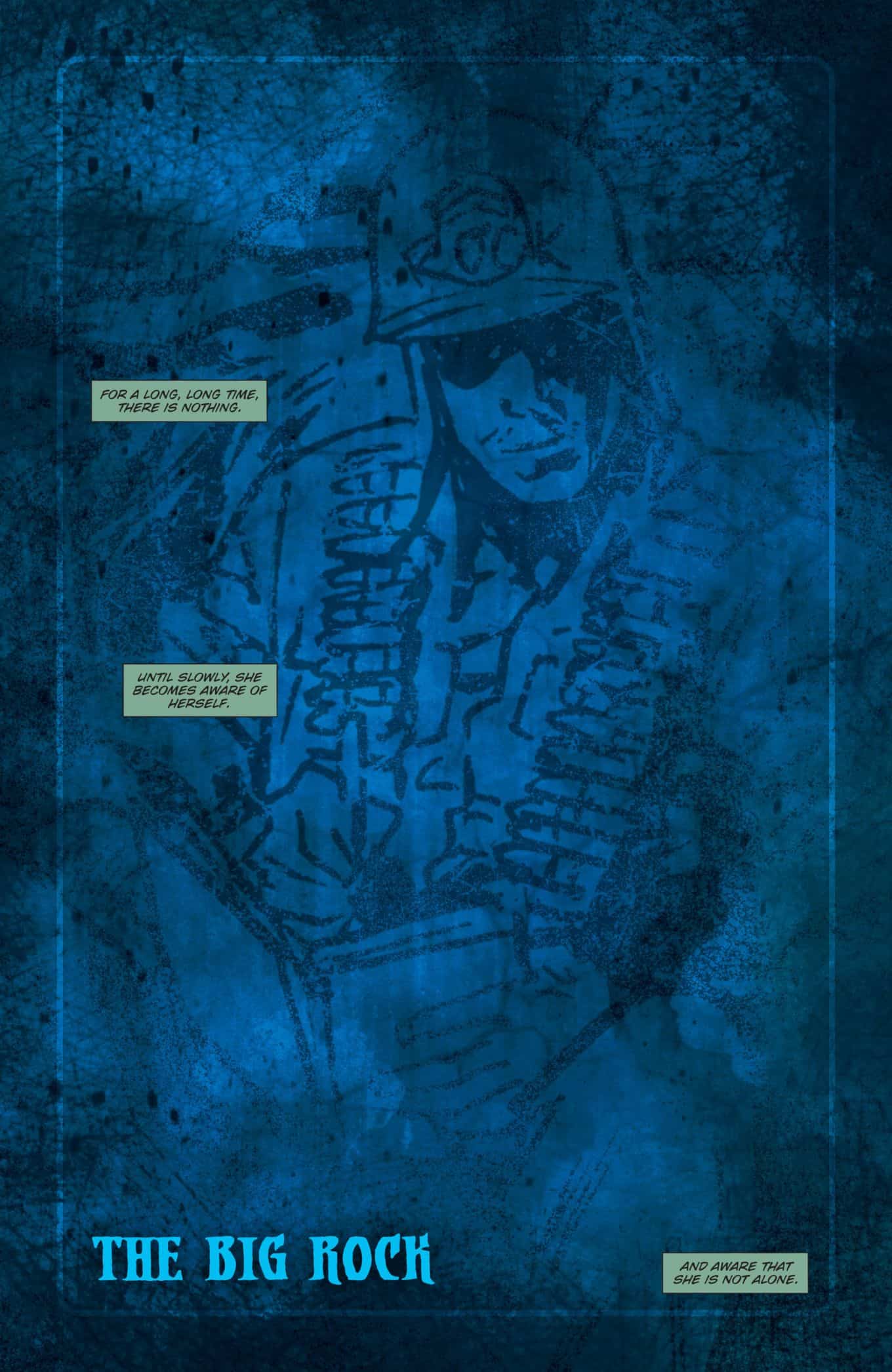 Wonder Woman is somewhere, somewhen, communing with the… 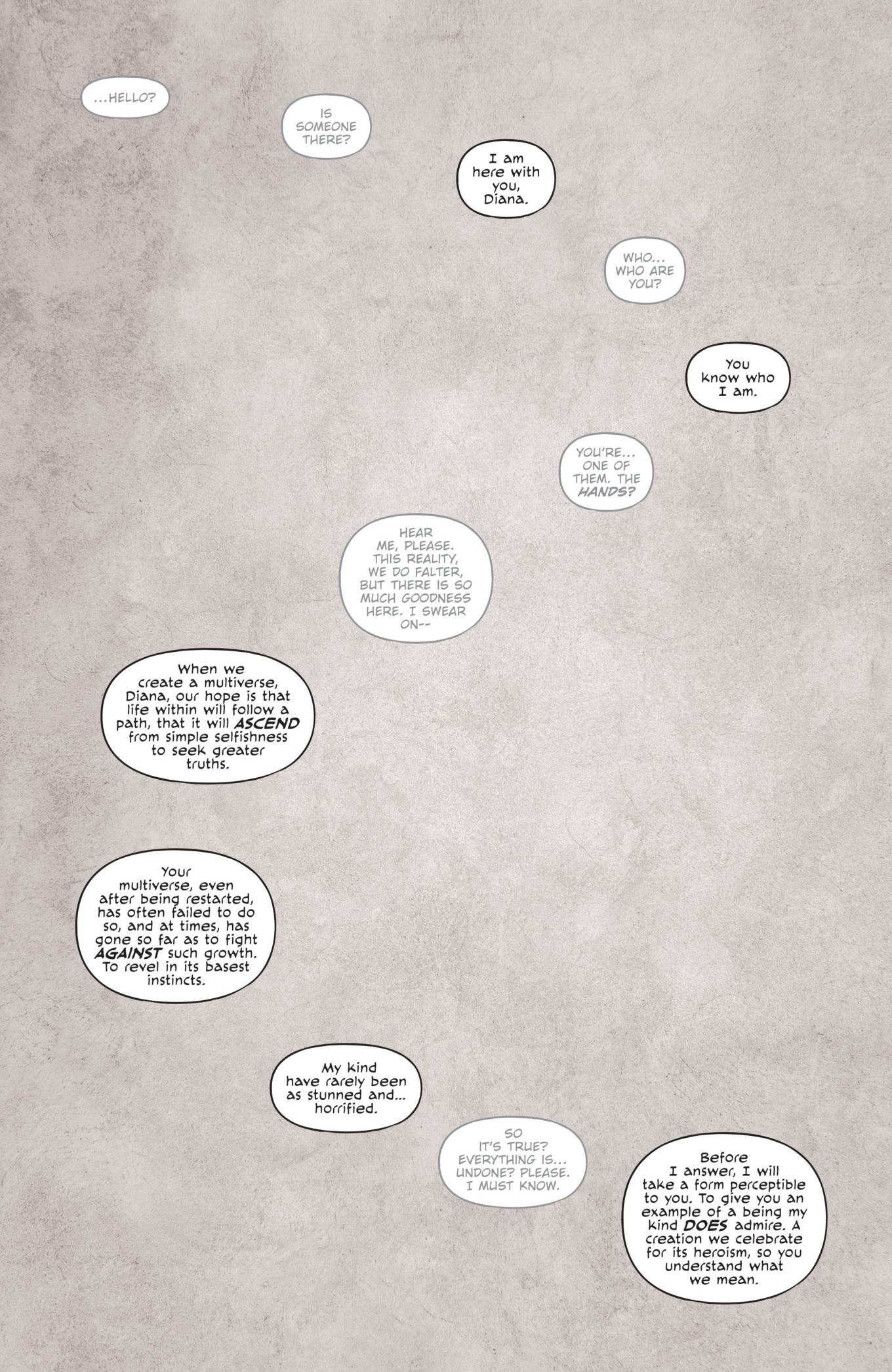 …forces of creation who take a form that she will comprehend. 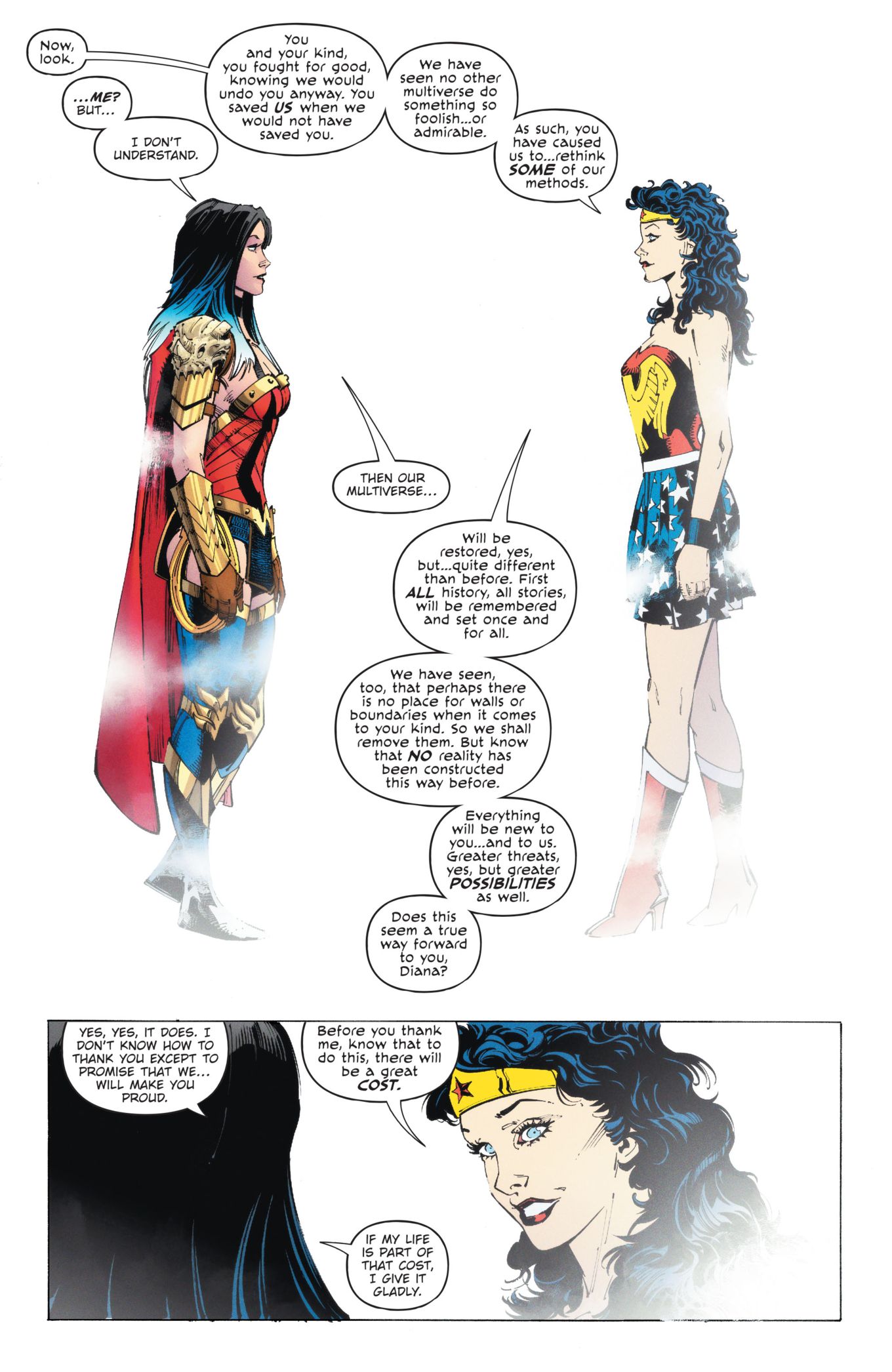 The barriers of the multiverse are gone and it all happened and it all matters; Wonder Woman is also “elevated” and we’ll know more about that during Infinite Frontier. 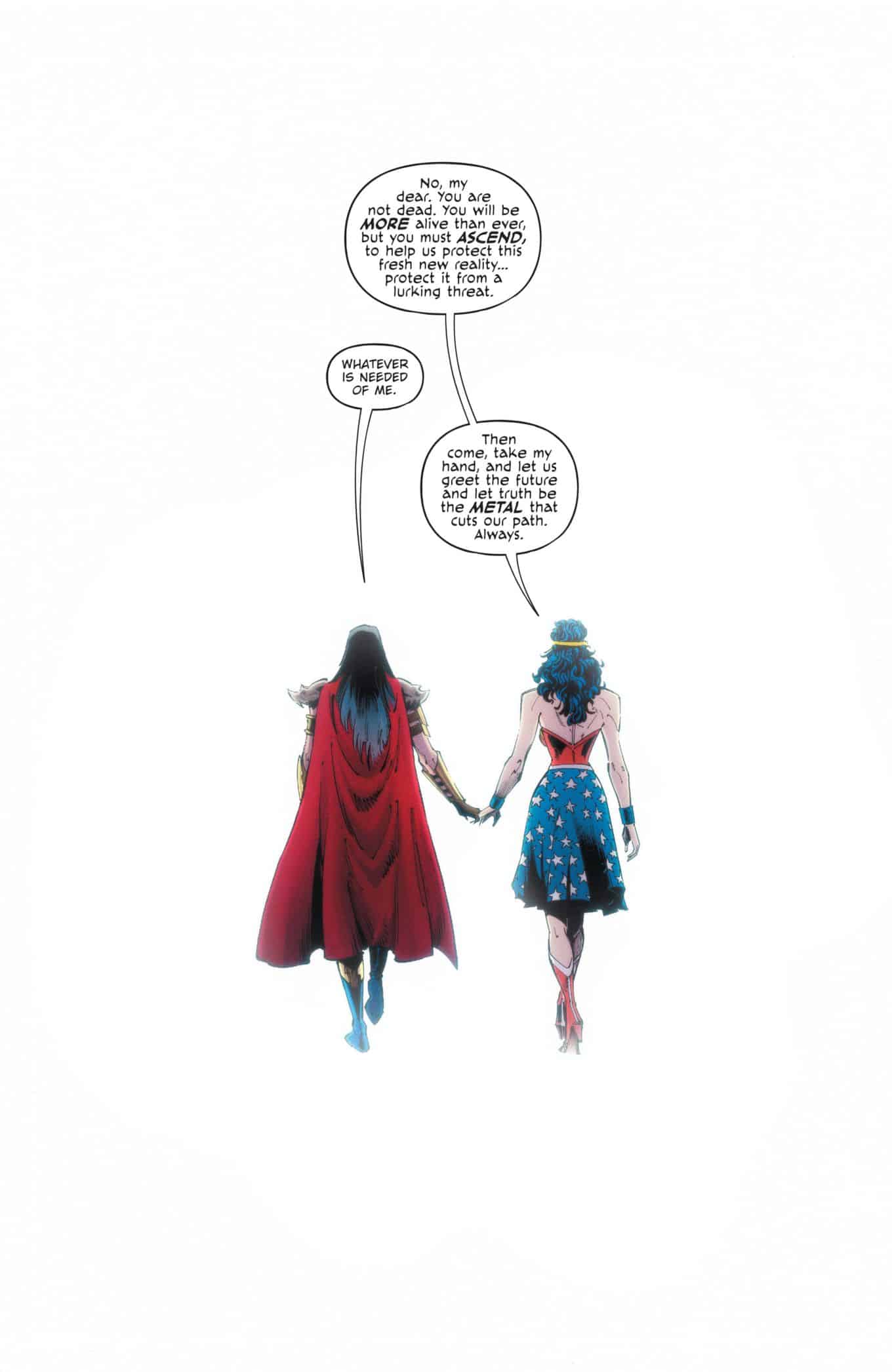 Plus many if not all of the dead are restored; that would appear to include prominent characters like Alfred Pennyworth, Roy Harper and others as they are revealed during Infinite Frontier. 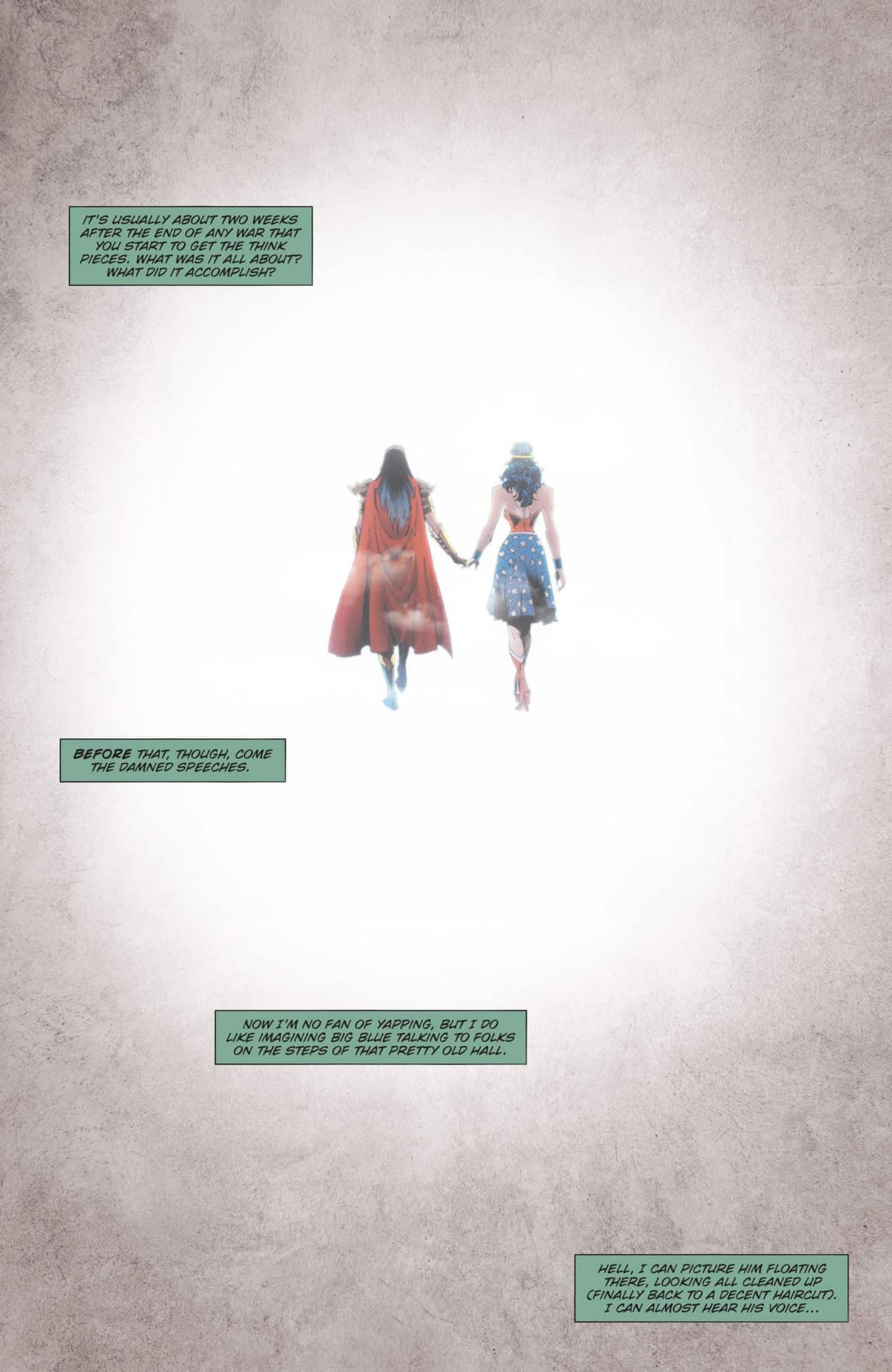 Looks like the super-heroes and the world celebrate; so they remember the events of the Dark Nights: Death Metal event. However, it isn’t stated what number this new prime Earth is. 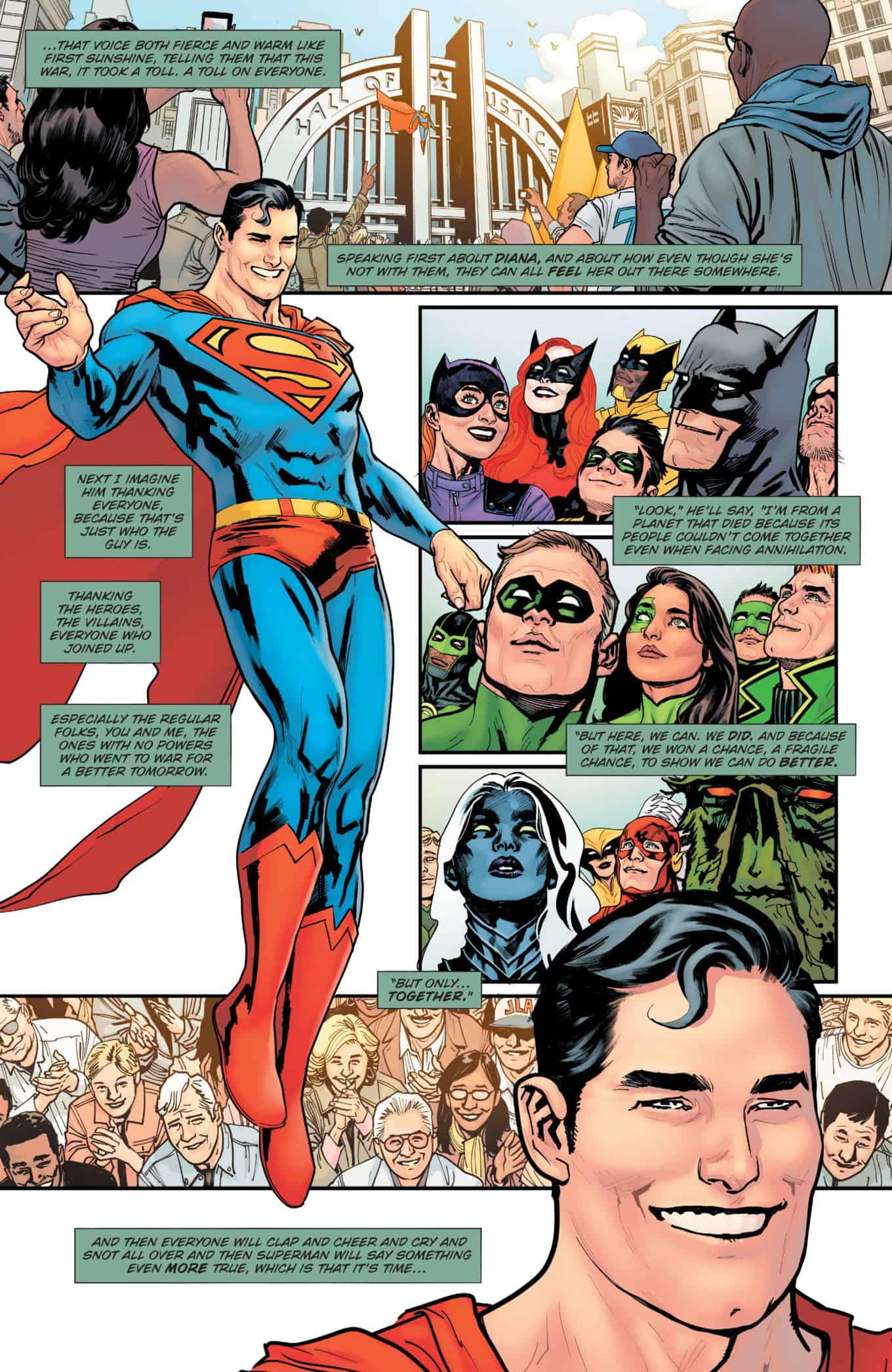 In a bit of an absurd twist, it look like Batman and the Justice League weren’t just rock musicians on the variant covers of this event, but in the book as well?! 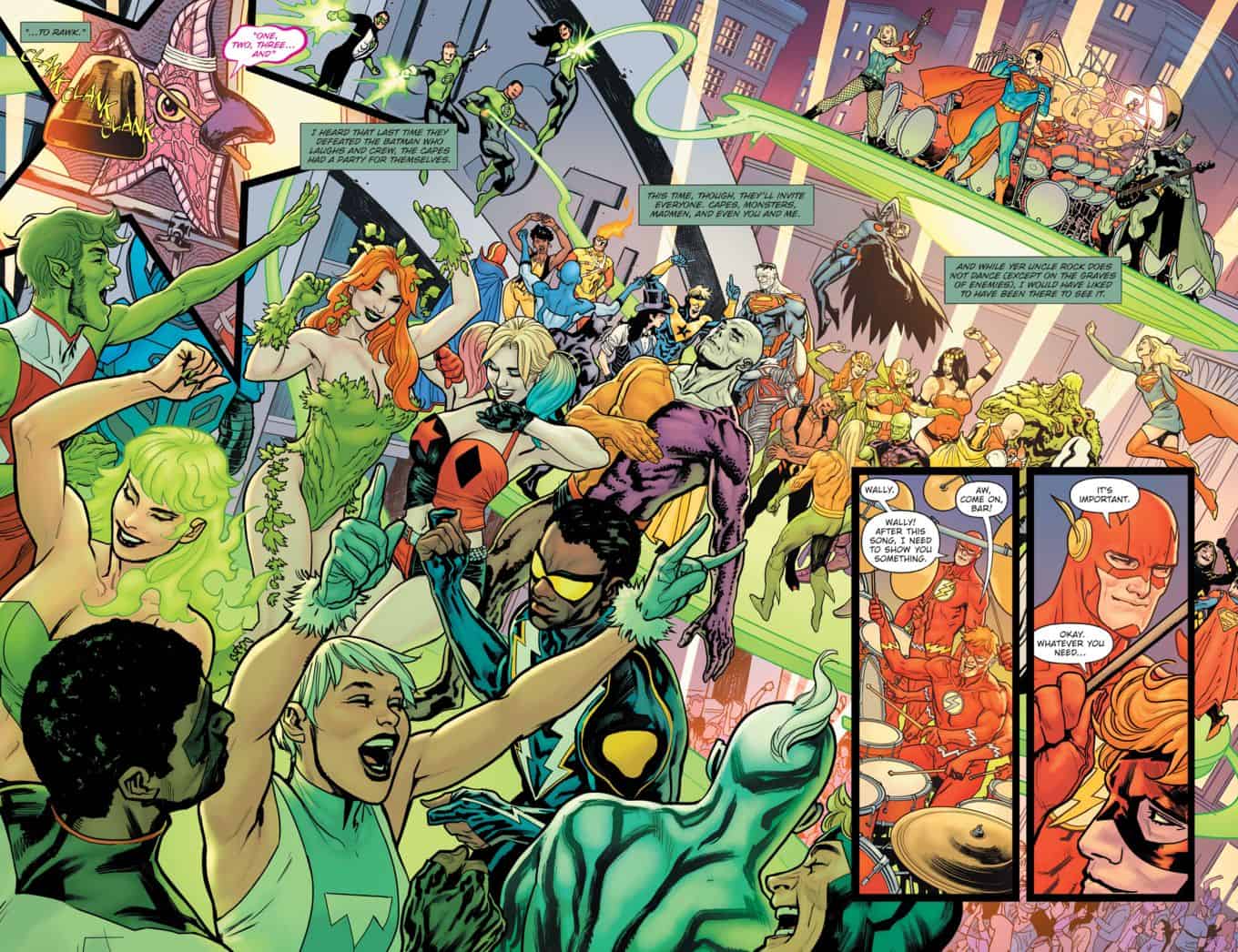 Party time is over and the Justice League and members of the Legion of Doom are trying to sort out what the new multiverse looks like. 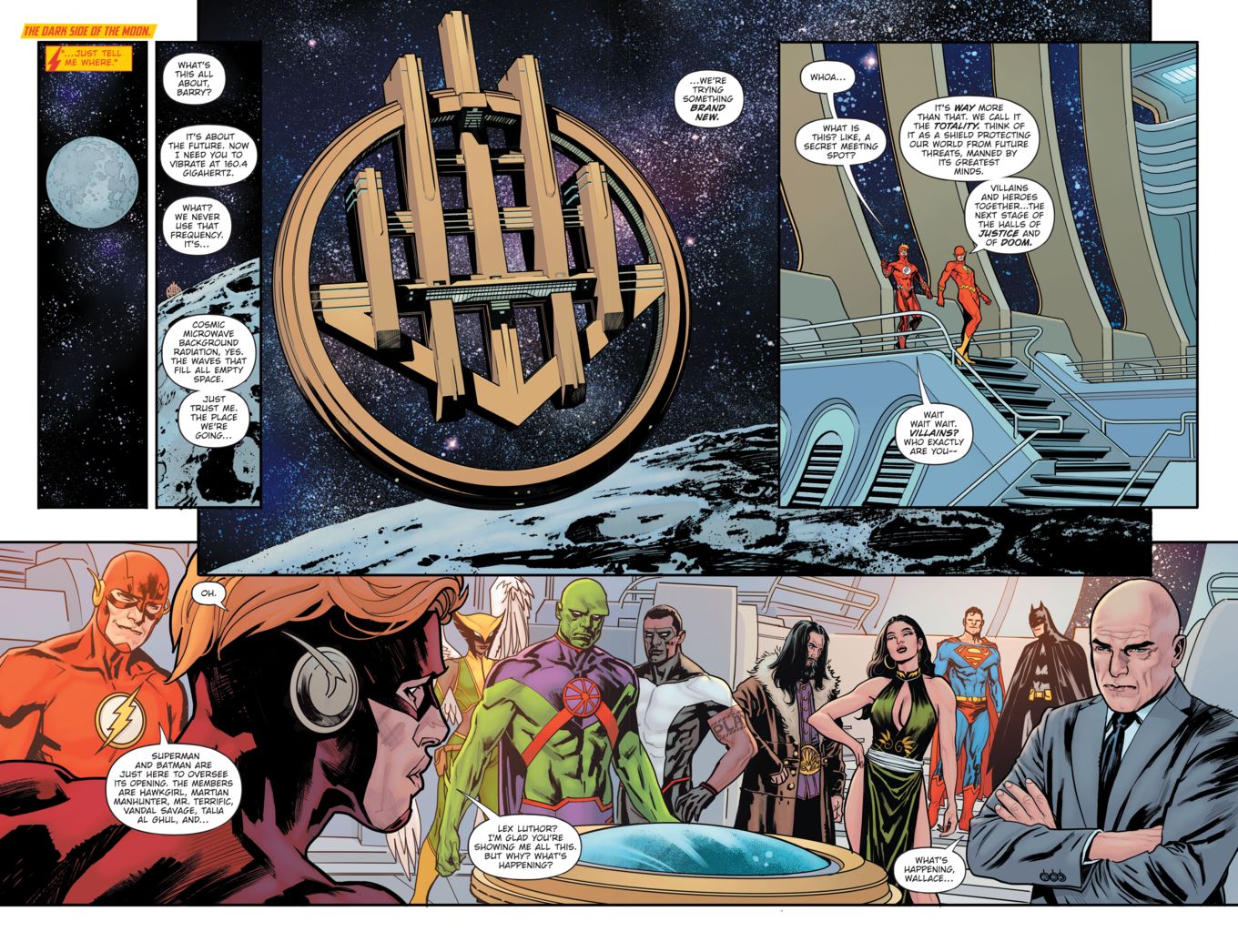 Here is what they learn. 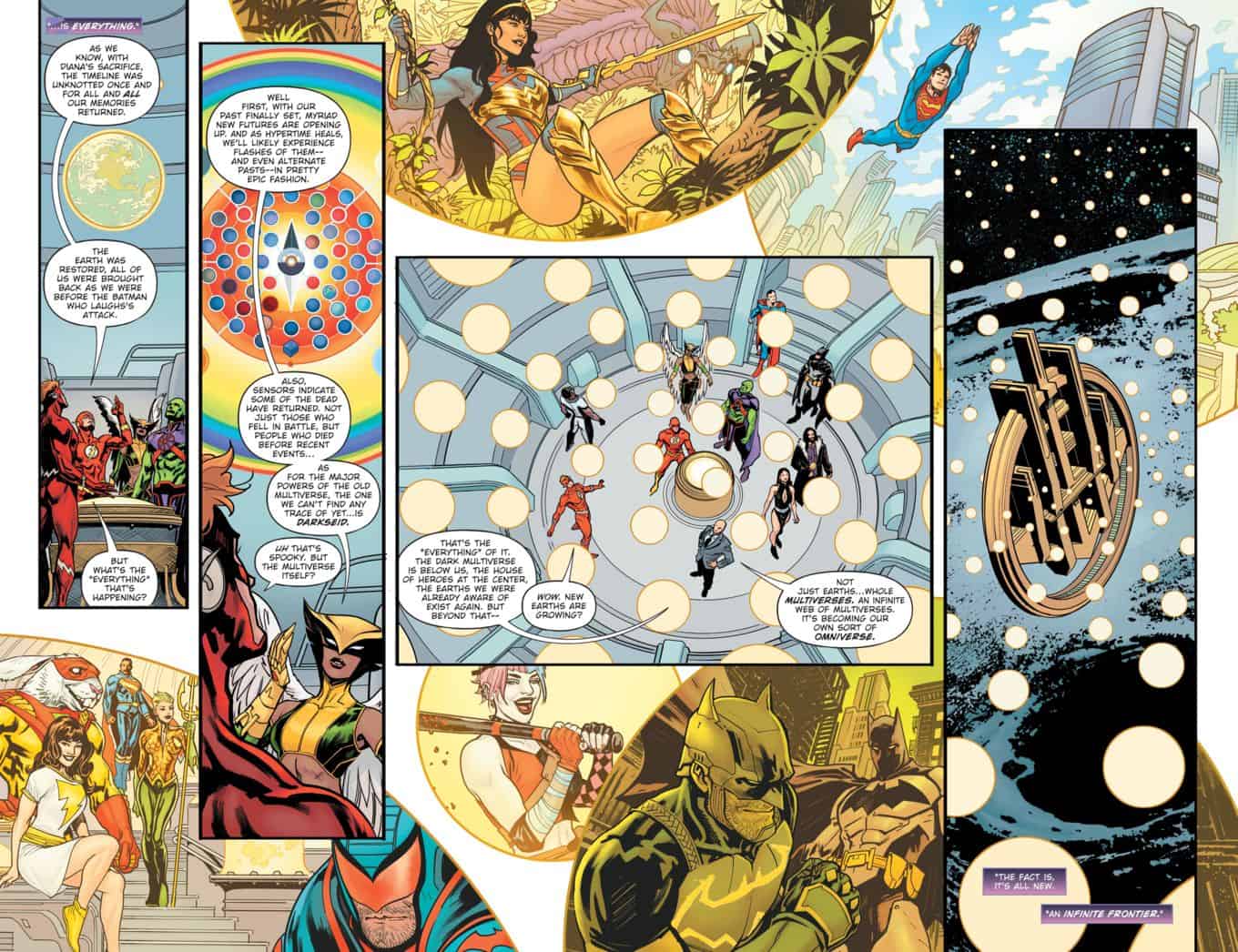 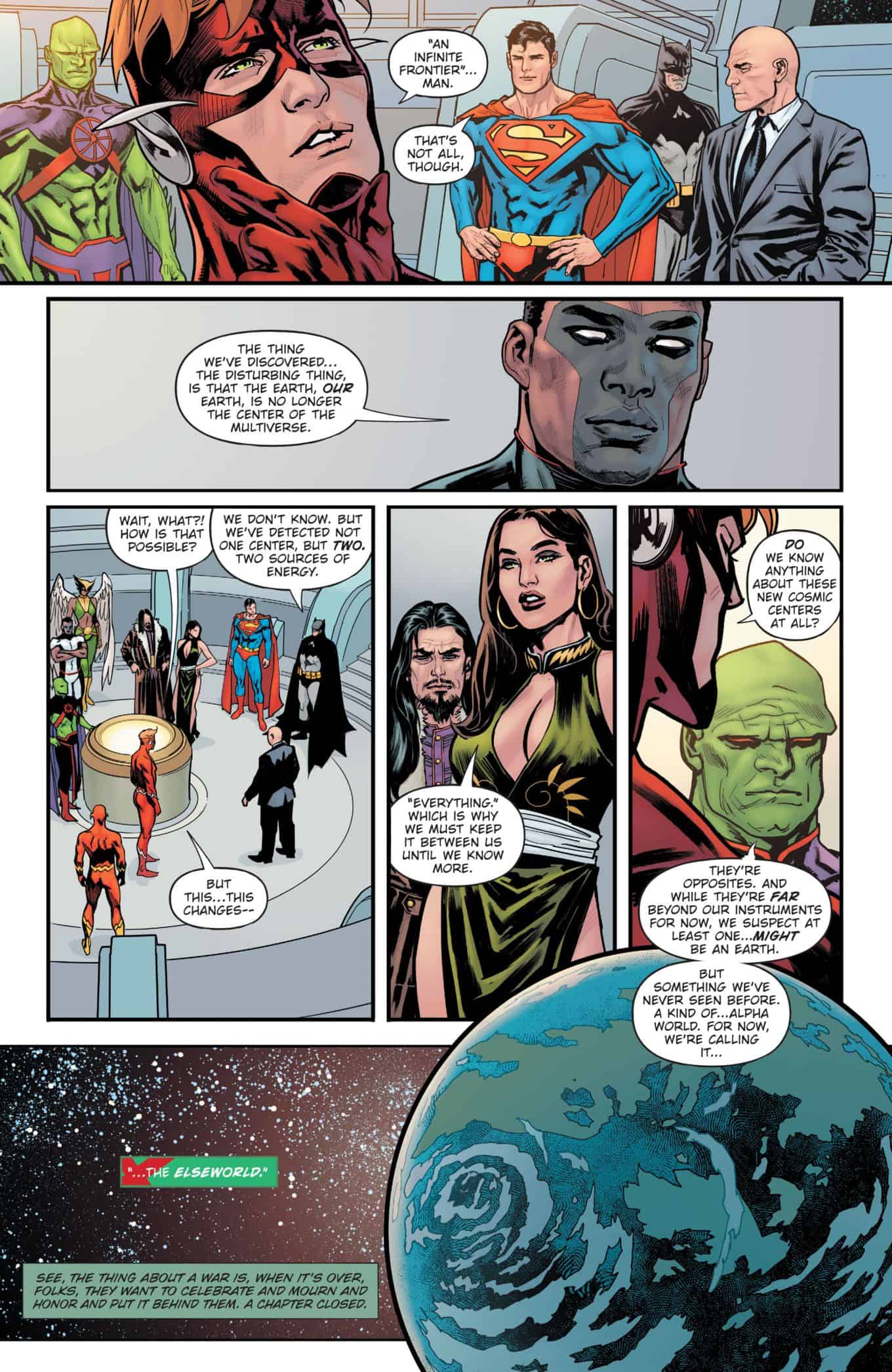 If there are other gems in the issue, that I missed, that further amend DC Comics’ cosmology, just let me know. This stuff was confusing at times in this issue and throughout this whole event.

The last two pages of the issue involve the Justice Society of America (JSA) here and here with Sgt. Rock so he truly serves as bookends for the event. It is noted as being set in 1943 on Earth 0; is this the same Earth as the prime present day Earth?

Possibly and likely, but we’ll see how Infinite Frontier shakes out. I do like the idea, if it works out that way, that any Earth 0 should be the one where DC Comics first heroes in the JSA originated from NOT an Earth 2 despite that second Earth being steeped in history.

If not in same Earth’s timeline, the modern day Justice League should on an Earth 2 IMHO.

In the end, I do hope the JSA and Justice League are on the same Earth and I hope for a new generation Infinity Inc. or Justice Society.

Also, while not consequential and not included in my page count, above is the last “back stage pass” for Dark Nights: Death Metal.