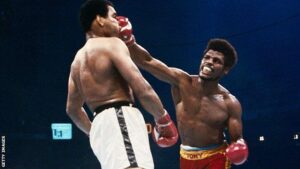 Leon Spinks, who surprised the boxing world by beating Muhammad Ali for the world heavyweight title in 1978, died Friday [February 5, 2021] night at age 67, according to the Firm PR, a public relations firm that represents him.

Spinks, who had been suffering from prostate and other cancers for five years, died with his wife, Brenda Glur Spinks, by his side, the firm said.

The St. Louis native, a former Marine who won a gold medal as a light heavyweight at the 1976 Olympics, was just 13 months and eight fights into his pro boxing career when he stepped into a ring against Ali on Feb. 15, 1978, in Las Vegas.

But Spinks — a heavy underdog who had never gone beyond 10 rounds — went right after the champ, who was 36 years old and clearly on the downside of his career.

Spinks, then 24, had enough endurance to survive a 15th-round flurry from Ali — and provide one of his own in the closing seconds. The split decision went to Spinks, who flashed his famous gap-toothed grin after becoming the only fighter to take a title from Ali in the ring.

“In that fight, everything clicked,” promoter Bob Arum said Saturday. “He came in with a game plan, and he beat Ali. It wasn’t that Ali wasn’t at his best, but Leon shocked everybody with how good Leon was.”

Suddenly, Spinks was the heavyweight champion of the world, memorably proclaiming afterward, “I’m not The Greatest. Just the latest.”

But that would turn out to be the highlight of Spinks’ career. First, he was stripped of the WBC title for refusing to defend against top contender Ken Norton. Instead, Spinks chose a rematch with Ali, who took back the WBA title in a unanimous decision at the Superdome in New Orleans seven months after their first bout.

It was the last win of Ali’s career.

Spinks would fight just once more for the heavyweight title, a TKO loss to Larry Holmes for the WBC belt in June 1981. He then dropped down to the cruiserweight division but lost his only title shot to Dwight Muhammad Qawi on a sixth-round TKO in March 1986. At points during his professional career, he had Mr. T, the future movie and television star, as his bodyguard.

Spinks retired at age 42 after losing a unanimous decision to Fred Houpe in December 1995 and finished his career with an unremarkable record of 26-17-3 (14 KOs).

Spinks, who battled in wrestling and mixed martial arts later in his career, dealt with financial and medical problems later in life.

“I was a poor young guy,” Spinks told the New York Daily News in 1997. “I never had nothing. All of a sudden I had something. I tried to do too much. I was crazy. I didn’t care about nothing. You think it’s never going to end.”

After moving to Las Vegas, Spinks married Brenda in 2011. The two were often seen at boxing-related activities, including Spinks’ 2017 induction into the Nevada Boxing Hall of Fame.

“He was happy-go-lucky, the salt of the earth,” Arum said, chuckling at the memories. “Leon was nutty, but you couldn’t get angry at the guy. He never meant any harm to anyone. You couldn’t help but love him even though you shook your head at how he acted.”

In 2014, Spinks suffered intestinal damage and was hospitalized after swallowing a piece of chicken bone. It led to multiple surgeries. In 2019, he was in and out of the hospital while undergoing treatment for prostate cancer.

On behalf of the IP team, I offer our condolences to the family, friends and fans of Leon Spinks.