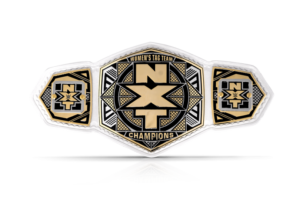 Unlike their last encounter at NXT TakeOver: Vengeance Day, Shotzi Blackheart & Ember Moon were able to dictate the pace of this bout and used their high-octane offense to prevent Dakota Kai & Raquel González from ever finding a rhythm.

González saved Kai from Blackheart’s cover following a brutal double-team wheelbarrow slam, then countered Moon’s attempt at the Eclipse. But Blackheart sent Kai into both of them, causing them to crash to the outside. With González out of the picture, Blackheart caught Kai with a bridging matchbook cover for a three-count, shocking the newly crowned champions and swiftly ending their reign…

Here’s some more looks at the new straps.

What do you think of the hardware?