DC Comics and The Flash #768 Spoilers and Review follows.

Will Gold Beetle Help Or Hinder?

For those wondering whether mentioning the Gold Beetle in the headline is a major spoiler, it is not, as DC Comics had spoiled this ending with the cover to the Flash #769 that has been out for months.

We open with a recap of relevant parts of the elder Wally West, the Flash’s history to get readers caught up on his origins, his triumphs and failures, as…

We wants to spend time with his family and despite the debate by the Justice League, and Green Arrow still mourning the death of his former adult sidekick Roy Harper, they agree to let Wally West walk away from super-heroing including…

…disconnecting him from the Speed Force. 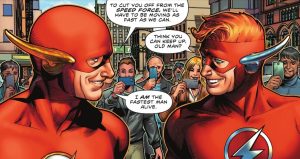 So, one-time mentor and mentee, and now equal footed colleagues and bothers, Barry and Wally race towards that Speed Force disconnection, but…

…also thwarting crimes along the way including Bloodsport (soon to debut on the silver screen in the Suicide Squad movie on August 6, 2021) in the Question’s Hub City.

The end up in the Speed Force where…

…Barry Allen no longer has super-speed (stared at by a Frenchmen who looks like Wally for some reason, but isn’t).

Turns out Wally West has been thrown back in time to the time of the dinosaurs?!

In present, it is confirmed that all of the speedsters have lost their speed and therefore, seemingly, their connection to the Speed Force.

After some gabbing between two scientists, the Flash and Mr. Terrific, it is non-scientist Green Arrow that hits in something by indicating that perhaps the Speed Force is wounded from the recent cosmic level goings on and is attempting to heal itself by cocooning as it were, drawing the speed back to itself, including Wally West himself who has always had a unique and special relationship with the Speed Force.

As Barry Allen attempts to find a way a way to communicate with Wally West through the Speed Force, we see that Wally West has taken over a Caveman’s body who has, I believe, a dirt lightning mark on his face; is this Earth’s first speedster? 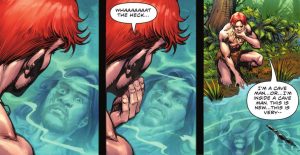 Looks like the Flash, Mr. Terrific and Green Arrow have found a way to speak with Wally…

…who they reach, but is dealing with a speed raptor?!

It has somehow siphoned off some of the Speed Force, but it is volatile and the dino explodes…

…perhaps revealing that extinction level event on Earth that led to the dinosaurs going extinct was a volatile Speed Force?

Despite some tense moments, communication is reestablished with Wally as they all realize the Speed Force cannot control itself right now as…

…Wally West is now in the future in Bart Allen Impulse’s body; making our hypothesis about the earlier caveman accurate it would seem; Wally West is jumping from speedster to speedster through time.

However, in this future he encounters a fleeing Gold Beetle and a giant Dominator alien?!

Over 35 pages of story and complementary art teams to reintroduce Wally West to readers, including why he’s special, plus delve into the Speed Force further in this new era. An action-packed and emotional issue peppered with intrigue and sci-fi. An entertaining and fun issue. 9 out of 10. 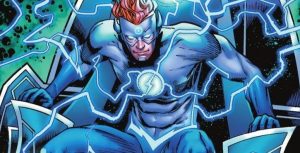 Also, the last time I use a Wally West Flash / Metron / Doctor Manhattan image to hype a Flash article.

Not the last race at all, fortunately.