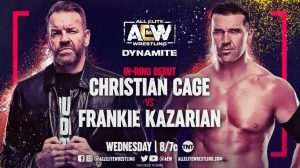 Christian Cage has not missed a step

Cage’s one-on-one match with Frankie Kazarian on Wednesday’s “AEW Dynamite” marked his first true singles match in seven years. The Canadian-born wrestler was sidelined back in 2014 with concussion-related injuries and risks

“It felt great to get back in there. Honestly, it was a little surreal. I had to kind of pinch myself right before I went out there,” he exclusively told ET Canada. “I stepped through those ropes and I kissed the ring. And that was kind of a symbol of like taking back what I had lost seven years ago. And it was like coming home.”

“As soon as I stepped foot to those ropes, it all comes back,” Cage continued. “No matter how much training you put in, nothing can replicate getting in there and doing it for real. So it was a real test and it was a test against myself and against Frankie and against all these factors of coming back after such a long layoff. But I am always my toughest critic, so I will grade myself a B-plus.”

Christian and his childhood friend Edge are among the most prolific tag teams in pro-wrestling. Edge served as Christian’s confidant as he considered his future with AEW and WWE. Cage actually re-watched his AEW debut match with his best friend.

“Yeah, I did, actually,” Cage confirmed when asked if Edge saw his match. “So he’s actually staying at my house. Yeah, because obviously Smackdown and Raw are here in Tampa so we watched it together. He was very happy for me and was very complimentary of it. And of course, we always both kind of nitpick and give each other constructive criticism and those sorts of things.”

“But I think, for the most part, he felt the same way that I did. I don’t think it could have gone better for the first one back.”

It was an impressive match.