Mike Tyson Returns To AEW and Takes A Side In War Between Chris Jericho’s Inner Circle and MJF’s Pinnacle! (AEW Dynamite Spoilers!) 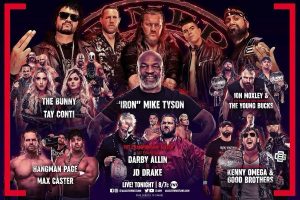 …The Inner Circle returned with a revelation for the Pinnacle!

“We are back in black, baby,” said Jericho.

The fans were chanting for Inner Circle. 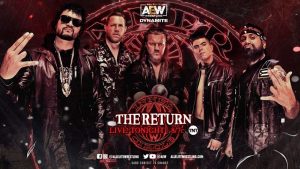 “We got a beatdown from the Pinnacle and after that we realized we made a lot of bad decisions. But those decisions were made by MJF. I brought him into the Inner Circle to keep him under my thumb because I know how dangerous he is. We had it perfectly planned. We knew eventually he’d show his true colors. But we got outsmarted by him. He’s only 25 years old but he’s at the Pinnacle. The problem is you don’t want to wait, MJF. You want to be better than the G.O.A.T. Chris Jericho now. You’re not as good as you think you are Max. I see you listening to the critics and the fans online. We call that being a mark. You’ll never be better than Chris Jericho and you know it. That’s causing your brain to ferment and to sour. Look at the men you’re surrounding yourself with. We’re going to turn the Pinnacle into a human centipede. You want blood? You’ll get it on May 5th in a ‘Blood & Guts!’ Match!” said Jericho…

…Chris Jericho was being interviewed backstage by Alex Marvez when Jericho was attacked by MJF and Pinnacle! They took him to the ring, where FTR dropped him with a spiked piledriver! The Inner Circle were showed trapped in their dressing room.

“A reunion with Jericho that’s very favorable to the Inner Circle,” said Jim Ross about Tyson returning to DYNAMITE….

An interesting night of Dynamite.