Here was the card for Night 2.

Here’s how the championship matches shook out.

Santos Escobar defeated Jordan Devlin to unify the NXT Cruiserweight Championship; since they both had the straps I don’t think this qualifies as a “new” champion.

Full results for Night 2 are here.

Plus, NXT moves to Tuesdays as of next week. 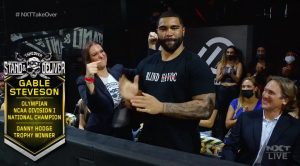 Perhaps, the brand will include NCAA wrestling champion Gable Steveson?

Maybe even Sarray from Night 1 too?

Tune in next week to learn more perhaps.

However, we know for sure that Franky Monet debuts on next week’s Tuesday return by NXT; it is believed that she is the FKA Taya Valkyrie.

There’s still much more to come during Wrestlemania 37 week.

The fun is not over yet.