Santos Escobar of Legado Del Fantasma issued an open challenge for his strap.

Kushida is now the new champion. 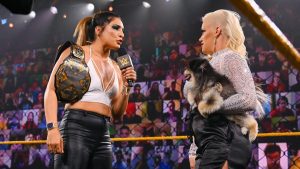 Then left to enable the next segment which was our number one moment above.

(5) Karrion Kross Sent A Message To The Locker Room As The New NXT Champion.

He’ll take on all comers.

That was a big show to end Wrestlemania 37 week.