On this week’s AEW Dynamite next week’s next match for Christian Cage was announced. 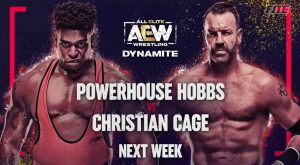 This stems from an alterication between the faction and Cage on this week’s Dynamite as recapped by AEW. 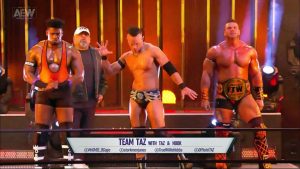 Dasha [Gonzalez] interviewed Team Taz backstage. Taz said they hadn’t heard back from Christian Cage about their proposal for him to join them. “Absolute” Ricky Starks was furious that they even had to wait for his reply. Taz told Starks to chill out. Taz said they were going to lock down Christian Cage tonight, but he ordered Starks and “The Machine” Brian Cage to stay back because they were too fired up.

Tony Schiavone was in the ring to interview Christian Cage after the commercial break.

“Right now Team Taz is a bit of a dumpster fire. I didn’t come to AEW to help you fix your problems. I came to AEW to win championships. My answer is no,” said Christian Cage.

“You just made the biggest mistake of your life,” replied Taz.

“The damage has been done. The gauntlet has been thrown,” said Jim Ross.

Looks like Christian Cage will be mixed up with Team Taz beginning with Powerhouse Hobbs next week.