WWE Smackdown Has Cesaro Flirt With Roman Reigns and Main Event In One Night! Smackdown 04/16/21 Results, Recap and Spoilers!

Following his victory over Edge and Daniel Bryan at WrestleMania, Universal Champion Roman Reigns claimed that there was no one left that would dare face him. When Cesaro decided to follow up his victory over Seth Rollins on The Grandest Stage of Them All by interrupting The Head of the Table, Reigns openly disrespected The Swiss Superstar by making his exit without saying a word…

After being humiliated by Roman Reigns earlier in the night, The Swiss Superman was determined to prove that he belongs in a match against the Universal Champion by making a statement against “Main Event” Jey Uso. Before The Swiss Superman could execute the Cesaro Swing on the winner of the 2021 Andre the Giant Memorial Battle Royal, however, Seth Rollins suddenly emerged to take out his adversary, making clear that he is not done with Cesaro by a long shot… 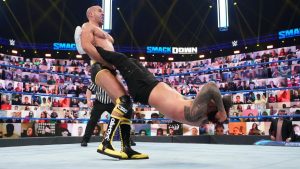 …SmackDown results, April 16, 2021: Seth proves himself to be The Swiss Superman’s kryptonite 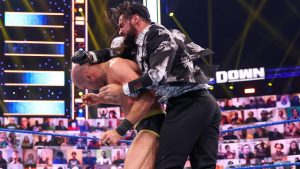 In the wake of his WrestleMania loss to Cesaro, Seth Rollins unleashed a sneak attack on the Swiss Superstar… 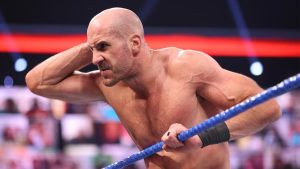 Well, WWE seems to finally be pushing a fan fave seven years after fans demanded it, but let’s see how this plays out.