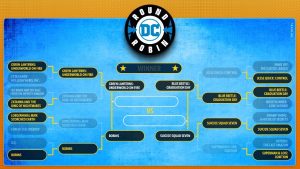 That looks like the Superfriends’ El Dorado on the Suicide Squad?

As well as Robins vs. Green Lanterns: Underworld on Fire.

I think Robins is the book to beat.

Blurbs on each remaining series were part of the Round 1 announcement with art and creative teams revealed in Round 2.

Meet the four remaining pitches of #DCRoundRobin 🎉 Join the DC Community to prepare for Round 3 voting and first looks, launching May 5

Some likely more art and details on the last 4 series standing on May 5, 2021 to inform Round 3 voting, via DC Comics’ official Twitter and Instagram accounts, that ends on May 27, 2021.