“I find it miraculous that Darby was medically cleared to wrestle tonight after being thrown down the stairs last week,” said Jim Ross.

Miro manhandled Darby, assaulting the champ before the bell rang! Miro rag dolled Darby on the outside of the ring!

“This is just getting started in the worst way for Darby Allin,” said Jim Ross.

Ref Paul Turner asked Darby if he could go. Darby said yes and Paul Turner signaled for the match to begin. Darby surprised Miro with a shotgun dropkick and Miro shrugged it off! Darby blasted Miro with a cannonball tope suicida! Darby attempted a Coffin Drop but Miro caught him with a belly to back suplex onto the arena floor!

“Things are looking bleak for the champion as Miro is squeezing him!” said Excalibur.

Darby escaped and jumped onto Miro’s back. Darby applied a sleeper, and Miro dropped to one knee. Miro made it to the ropes and the ref was forced to break the hold. On the outside of the ring, with Darby on his back, Miro sprinted into the wall, knocking Darby silly on impact!

Miro hammered down with the point of his elbow on Darby’s shoulder. Miro slammed Darby into the ropes!

“He could blow out a knee the way he hit those ropes,” said Tony Schiavone of Darby.

Darby Allin slapped Miro’s face! Darby came over the top with a stunner for a near fall! Darby connected with another stunner! Darby went up top for the Coffin Drop but Miro caught him! Darby created some distance and used a Code Red for a near fall. Miro locked on the Game Over submission and referee Paul Turner stopped the match!

Ethan Page and Scorpio Sky attacked Sting until Dark Order ran to the ring and forced them to retreat!

“The MurderHawk Monster” Lance Archer came out to the ramp and pointed at new TNT Champion Miro while Jake “The Snake” Roberts held Archer back! 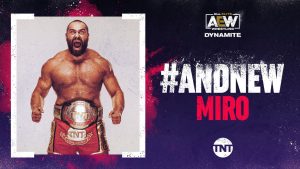 Miro as Rusev was 3 time WWE United States Championship capturing that last singles title in 2018; he was released by WWE in 2020.

This is Miro’s first championship in AEW and it looks like the company likes the pick.