A spaceship full of Kryptonian speaking inhabitants has arrived on Earth…

…with their armada greeted by Superman and son.

The lead ship crashes during battle with Superman…

…saving a passenger who has been branded with the Superman symbol.

She will be healed at the Fortress of Solitude under Kryptonian robot Kelex’s supervision.

Elsewhere, Superman meets with Aquaman and his Atlantean Council over an artifact from the crashed ship.

While they claim its inanimate contents, there are prisoners seemingly on board; pre-shackled and not by the Atlanteans.

Superman comes in peace and one of the prisoner’s kills himself trying to hurt Superman?! 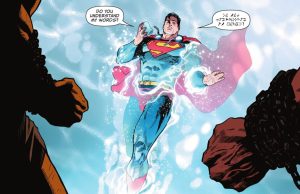 One of Superman’s guests is revived and…

…wants her shackles back…

…even using them to take out Kelex?!

We then see what happened and how Mongul has weaponized…

…Superman to make these aliens seek out and destroy Superman otherwise their people will be destroyed.

The book also has a Midnighter back-up that leads into the Mister Miracle Source of Freedom limited series (first issue out now and its poignant).

Did not expect subtly or psychological warfare from the behemoth Mongul, but that makes it more eerie. The back-up was interesting too. The art styles on both stories clash though as opposed to being complementary. A compelling issue nonetheless. 7 out of 10.