We get an interesting way of summing up the last few issues via a newspaper article.

Looks like a zombie Sarah Worth, presumed to be dead, shows up to meet Bruce Wayne.

He shoos her in as his Brownstone neighbor thinks there is something amiss; is that a Clayface?

As a result of the neighbor’s call the police inspect Wayne’s dwelling and leave finding nothing as he bagged Clayface quite literally.

Another of Lydia and Bruce’s neighbor’s shows up seemingly zombied too; Neil Betterman.

The Clayface tries to escape…

Turns out its Lady Clayface…

…who has no idea what is happening to her. 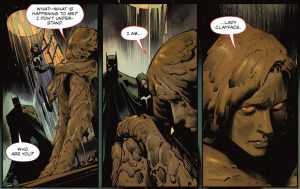 Huntress and Batman go to one of his subterranean sewer micro-caves where they learn more about Sarah Worth, but also realize Neil Betterman is also a threat.

Later, the Penguin captures someone looking for him that has some kind of pink maggots in his eyeballs?!

Batman confronts Neil Betterman who is afflicted with the same “condition”.

Huntress then tells Batman about the Mary Knox mystery she’s been working on in the back story of the last few issues.

The book ends with Lydia seemingly have been killed by Neil; her body is found and next issue teases Bruce Wayne as the prime suspect due to the exchange that opened this issue presumably.

We also have the conclusion to the Huntress back-up to round out the issue.

I would have liked to see the whole Mudpack return and not just Lady Clayface, but an entertaining issue nonetheless.

The main story, and even the back-up, show the subtle power of storytelling and the synergy that comes for the perfect pairing of a writer with artists. This series isn’t as flashy as its sister Batman series, but it does bring the “detective” and mystery that its titles denotes. I didn’t expect to like this series after the stellar run of the previous creative team, but this new run is worth a read. 9 out of 10.