MAD GHOST COMICS presents a MONSTROUS 80 PAGES of all-new stories featuring GEIGER, as well as his allies and enemies! First, in an extra-sized lead story, GEOFF JOHNS & BRYAN HITCH introduce the mysterious man known as REDCOAT and reveal his bizarre ties to the American Revolution, the Unknown War, and Geiger himself. Then, discover the secrets of the Warlords of Las Vegas – Bonnie Borden! Goldbeard! Mr. Karloff! And more! – in a series of tales written and drawn by some of the greatest writers and artists today! Plus, the special origin tale of Geiger’s favorite two-headed dog, BARNEY, and a PREVIEW of GEOFF JOHNS & GARY FRANK’s new upcoming series: JUNKYARD JOE! 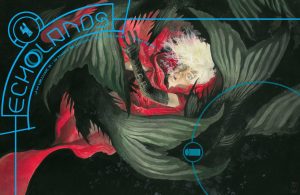 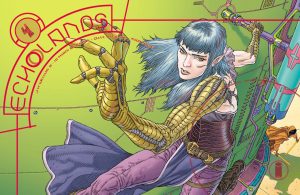 Hope Redhood and her allies have been pursued by a violent golem, attacked by a giant sea serpent, and imprisoned by a former friend. No matter the threat, the team is determined to discover the secret behind Teros Demond’s stolen gem. But when an unexpected clue arises, they’ll have to brave the depths of the ocean to face their future with the enigmatic Oracle!

With four of the Five awakened, all eyes turn to the final piece of the puzzle. But who is the Prodigy? Where in the world are they? And who will get to them first?

Welcome to Existence. An unimaginable infinity beyond space and time.

Marshall is trapped there. But how? And why? Can he make it out?

And what is Catalyst?

Honourable mention #1 for a unique version of an issue coming in standard format already in the month; what do you think of this “recolored” and “blacklight-reactive fluorescent inks” version?

Welcome to Existence. An unimaginable infinity beyond space and time.

Marshall is trapped there. But how? And why? Can he make it out?

And what is Catalyst?

Honourable mention #2 for a collection of a series I have enjoyed.

Set in the years after a nuclear war ravaged the planet, desperate outlaws battle for survival in a world of radioactive chaos. Out past the poisoned wasteland lives a man even the Nightcrawlers and Organ People fear. Some name him Joe Glow, others call him the Meltdown Man. But his name…is Geiger.