Who Is This Superboy…

…the Conner Kent Superboy of the Suicide Squad.

Well, turns out Amanda Waller has a Bizarro Superboy on her team deliberately; his name is Match.

Match did not know he wasn’t Superboy, due to Amanda Waller’s machinations.

It also seems there are more of him in the cloning hopper.

However, the Suicide Squad has what they came for; the serum the stabilize Match so he doesn’t act like a Bizarro.

Match doesn’t want the serum destroying it as…

…as the Suicide Squad is teleported or somesuch back to HQ.

Back on Taskforce X Island Amanda Waller learns Match is stable and powerful; the latter being what she needed.

So, there you have it; the Suicide Squad’ powerhouse is Match. 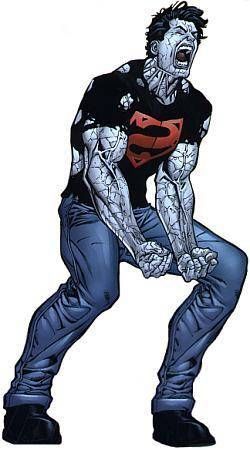 A character whose power not just rival Superman and Superboy, but Earth 3’s Ultraman as well.

He even appeared in the popular Young Justice animated series.

More on Match over at CV.