A New WWE Champion Is Crowned On WWE Raw! (Spoilers) 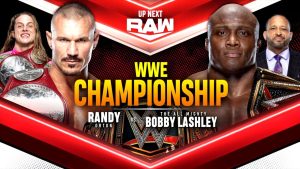 Going one-on-one for the first time since 2007, Bobby Lashley and Randy Orton finally squared off with the WWE Championship on the line. This huge main event delivered, and the back-and-forth clash of titans came to its end when The All Mighty hit a Spear on The Viper to retain his championship.

Bobby Lashley’s night was not over after defeating Randy Orton, because as promised, Mr. Money in the Bank Big E swiftly made his presence felt after the match and completed his goal by cashing in his contract. After narrowly kicking out of a Spear, Big E dropped Lashley with the Big Ending to cap off the night with an emotional victory as he took his place as the new WWE Champion and celebrated with Kofi Kingston and Xavier Woods…