Not Everything Is As It Seems?!

This debut issue has a few variant covers below on top of the main cover above.

We open with 41 years of Deathstroke’s publishing history summarized on one page.

His first appearance was in New Teen Titans #2 (spoilers here) that landed in stores on November 30 1980.

T.R.U.S.T. stands for Transparent Researchers United for Strategy and Technology first debuting in Batman: Urban Legends #6 (full spoilers here) as a bit of a prelude to this new ongoing series.

The team consists of kid Toyman and Juliette Ballentine as well as its title character Deathstroke with Batman tech in use; I think the Dark Knight will be angry over this!

…requiring Black Canary to shed her disguise and step in with her sonic scream.

Looks like H.I.V.E. is back using humans as incubators for their insectoids?

Here’s a classic Who’s Who bio for H.I.V.E., but their 2021 iteration appears more macabre. 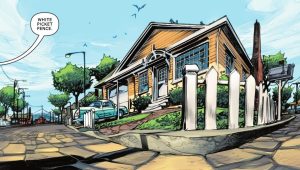 …gets them into a sticky situation. 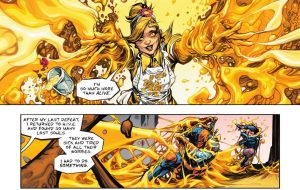 We then meet more of the H.I.V.E. family which…

…followed by the the kids leaving the Queen without a family, a collective, a hive.

The book begins to end with Deathstroke revealing his dying and trying to actually be a hero before he goes hence aligning with T.R.U.S.T.

However, it seems Black Canary is more of a mole than an ally to Deathstroke.

There is more to meets the eye with H.I.V.E. as…

…we also get a glimpse of the series’ eclectic future issues.

This has been an interesting week for Deathstroke as three Deathstrokes showed up in the Justice League hunting down Lois Lane’s surprise secret agent brother Daemon Rose.

Solid art and engaging story. Many parts felt new and fresh yet honoring the past. I am intrigued. 9 out of 10.