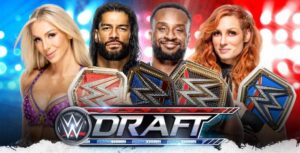 However, several WWE Superstars remained undrafted as of the end of WWE Raw this past Monday.

WWE has rectified that by announcing the full rosters of both Raw and Smackdown on Raw Talk after Raw went off the air.

There are still some notable WWE Superstars who remain undrafted including Asuka, Elias, Bayley, Slapjack and Eva Marie.

There is only one deliberate “free agent” currently and that is Brock Lesnar; although I suspect John Cena and the Rock fall into that category if and when they wish to return for a “visit”.

This feels like a more “balanced” draft of talent between the two brands even if one of the shows is an hour longer than other.

Well, at least the Hurt Business is still together on WWE Raw and WWE has really been giving the social media love!