AEW Secures 1/2 Of WWE / NXT’s Undisputed Era As Bobby Fish Is All Elite! 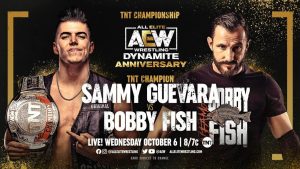 Here’s how AEW recapped their match and the shenanigan’s afterwards.

Bobby Fish hit Sammy with body shots and then kicked out Sammy’s leg. Sammy flipped over Bobby’s back and rocked him with a single leg dropkick! Sammy tried for a springboard but Fish kicked Sammy’s calf and knocked him down to the mat.

Bobby Fish went over the top with a senton, driving his shoulder into the chest of Sammy. Bobby Fish took Sammy off his feet again with a back elbow.

“He reminds me of Harley Race, his teacher,” said Jim Ross of Bobby Fish.

Sammy headed to the top, perhaps thinking for the 630 senton but Bobby kicked Sammy’s legs out from under him. Bobby Fish blasted Sammy with an avalanche falcon arrow!

“The body of Guevara just jarred across the ring!” said Excalibur.

Bobby Fish used an exploder suplex into the corner for a near fall on Sammy! Guevara ducked a roundhouse kick from Bobby Fish and finished off Fish with the GTH!

“Demo God” Chris Jericho and Jake Hager ran out to the ring to even up the odds! Jericho went right after Junior Dos Santos! Dan Lambert and American Top Team retreated outside the ring!

“Allow me to clear up some confusion on who’s calling the shots here. You’ve been a big man in this business for a long time, Chris. RAMPAGE is coming to Miami and South Florida is the home of American Top Team. There’s only one king of the streets in the 3-1-5 and that’s Jorge Masvidal. Our town, our match, The Men of the Year and Junior Dos Santos with my bodyguard Jorge Masvidal ringside against you and your team Jericho!” said Lambert.

“We’re going to beat the living shit out of you, Lambert,” replied Jericho.

Nonetheless it was announced shortly afterwards that he has joined the company. 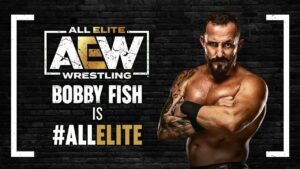 The other 1/2 of UE remains with WWE’s NXT brand. 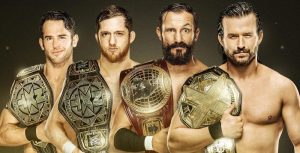 Roderick Strong is currently the NXT Cruiserweight Champion and leader of the new Diamond Mind faction.

Kyle O’Reilly appears to want to be a lone wolf, but seems to warming to new NXT superstar Von Wagner; a second generation wrestler as the son of Wayne Bloom.

The two team-up for a match next week as advertised above against Pete Dunne and a departing to Smackdown Ridge Holland.