A former chairman of the Joint Chiefs of Staff, secretary of state and national security adviser, Mr. Powell died on Monday, his family said. 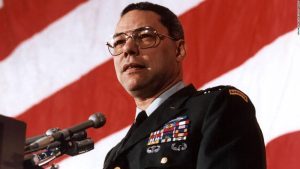 Colin L. Powell, who in four decades of public life served as the nation’s top soldier, diplomat and national security adviser, and whose speech at the United Nations in 2003 helped pave the way for the United States to go to war in Iraq, died on Monday. He was 84.

He died of complications from Covid-19, his family said in a statement. He was fully vaccinated and was treated at Walter Reed National Military Medical Center, his family said.

Mr. Powell was a path breaker serving as the country’s first African American national security adviser, chairman of the Joint Chiefs of Staff and secretary of state.

Born in Harlem of Jamaican parents, Mr. Powell grew up in the South Bronx and graduated from City College of New York, joining the Army through R.O.T.C. From a young second lieutenant commissioned in the dawn of a newly desegregated Army, Mr. Powell served two decorated combat tours in Vietnam. He later was national security adviser to President Ronald Reagan at the end of the Cold War, helping negotiate arms treaties and an era of cooperation with the Soviet president, Mikhail Gorbachev.

As chairman of the Joint Chiefs, he was the architect of the invasion of Panama in 1989 and of the Persian Gulf war in 1991 that ousted Saddam Hussein from Kuwait but left him in power in Iraq. Along with then-Defense Secretary Dick Cheney, Mr. Powell reshaped the American Cold War military that stood ready at the Iron Curtain for half a century. In doing so, he stamped the Powell Doctrine on military operations — armed with clear political objectives and public support, use decisive and overwhelming force to defeat enemy forces.

When briefing reporters at the Pentagon at the beginning of the gulf war, Mr. Powell succinctly summed up the military’s strategy to defeat Saddam Hussein’s army: “Our strategy in going after this army is very simple,” he said. “First, we’re going to cut it off, and then we’re going to kill it.”

It was a concept that seemed less suited to the messy conflicts in the Balkans that came later in the 1990s and in combating terrorism in a world transformed after the attacks on Sept. 11, 2001.

Sign Up for On Politics A guide to the political news cycle, cutting through the spin and delivering clarity from the chaos. Get it sent to your inbox.
By the time he retired from the military in 1993, Mr. Powell was one of the most popular public figures in America. 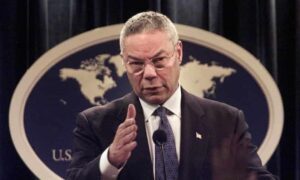 Once retired, Mr. Powell, a lifelong independent while in uniform, was courted as a presidential contender by both Republicans and Democrats, and became America’s most political general since Dwight D. Eisenhower. He wrote a best-selling memoir, “My American Journey,” and flirted with a run for the presidency before deciding in 1995 that campaigning for office wasn’t for him.

He returned to public service in 2001 as secretary of state to President George W. Bush, whose father Mr. Powell had served as chairman of the Joint Chiefs a decade earlier.

But in the Bush administration, Mr. Powell was the odd man out, fighting internally with Vice President Dick Cheney and Defense Secretary Donald H. Rumsfeld for the ear of President Bush and foreign policy dominance.

He left at the end of Mr. Bush’s first term under the cloud of an ever-worsening war in Iraq, and growing questions about whether he could have and should have done more to object to it…

On behalf of the IP team, I offer our condolences to the family, friends and admirers of General Powell.