The title swap between Becky Lynch and Charlotte Flair did not go according to plan on SmackDown.

Original sources told talkSPORT that Flair was meant to be trying to play ‘cat and mouse’ with the title and Lynch was meant to get her hand on it before she pulled it back. The timing error between the pair led to the title dropping to the floor, but whatever the reason, obviously the title wasn’t meant go to ground.

None of Lynch, Deville or Flair were happy with what unfolded, but they moved things along knowing Sasha Banks had to make her way to the ring.

As PWInsider has reported, backstage, Lynch and Flair are said to have got in a heated row. Although the altercation didn’t become physical, WWE officials were concerned.

The Flair/Lynch friendship has been strained for some time. People close to the situation say Flair didn’t appreciate being called ‘plastic’ during a promo a couple of years ago and it’s been tense since.

Vince McMahon wasn’t happy Charlotte left gorilla without talking to him. Flair then headed to Orlando to support Andrade at AEW Dynamite.

Bryan Alvarez of Wrestling Observer Radio has since reported that Flair was escorted from the building by security.

It’s believed no one involved was happy about the title switch segment and it was debated throughout the day.

It’s also believed Flair had wanted to drop the title to Bianca Belair on Monday Night RAW. She believed the finish killed what could have been a big win for Belair. Fightful Select have also reported that Flair had some issues with the booking.

A WWE source close to the situation reached out after seeing this report and offered their view.

The source states the way Vince wanted it to go down was Lynch and Flair exchange titles, but Becky grabs the two titles real quick and then eventually throws the other title at Flair.

Charlotte is said to have disliked the idea and Becky expressed concerns about whether she would actually do it to the writer involved in the segment and Sonya Deville.

Of course, the title got dropped and things didn’t go according to plan. Lynch ‘let her have it’ when the pair were back in gorilla, but Flair swore it was an accident. The source says precious few people believed that.

Lynch is now the champion of RAW and Flair is the champion of SmackDown. The next time they could feasibly meet would be if they are both still champions come Survivor Series.

In its recap of Smackdown, WWE has not include the video of the title exchange; it was referenced, but focus was on moving to Sasha Banks vs. Charlotte Flair on Smackdown for the WWE Smackdown Women’s Championship.

WWE SmackDown, Oct. 22, 2021: Charlotte Flair and Sasha Banks bring the bedlam to usher in The New Era of SmackDown

In a New Era on SmackDown, bedlam ensured between Charlotte Flair and Sasha Banks during the WWE Women’s Title Exchange involving Becky Lynch and King Woods officially took the crown in a triumphant Coronation. Plus, in the wake of WWE Crown Jewel, Brock Lesnar targeted Roman Reigns and unleashed a chaotic melee that ended with mass destruction in every direction and the indefinite suspension of The Beast.

As a result of both titleholders switching brands as part of the 2021 WWE Draft, Charlotte Flair and Becky Lynch emerged for the official exchange of their Raw and SmackDown’s Women’s Titles.

After a few tense moments that saw Lynch throw the SmackDown Women’s title at Flair, the two Superstars finally exchanged titles, but The Queen did not take kindly to The Man’s antics suggesting the two have it out right then and there, title-for-title until Sasha Banks interrupted to add fuel to the fire.

No longer interested in Banks, Flair or SmackDown, Big Time Becks made her way out of the arena as the heated exchange between The Boss and The Queen continued until Banks finally lashed out on Flair.

I guess WWE’s Four Horsewomen are not so tight anymore? 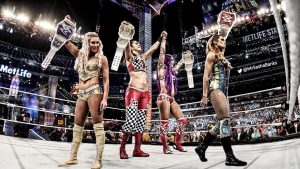