NJPW Unretires and Unmerges IWGP Heavyweight Championship… Or Something?! 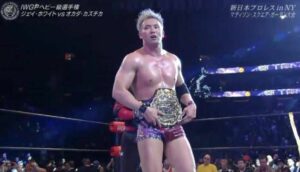 NJPW Road to Power Struggle tour got going… and this year’s G1 Climax winner, Kazuchika Okada, brought out something special with him to the ring — the retired IWGP Heavyweight Championship.

Okada defeated Ibushi in the G1 finals due to injury stoppage and said he wanted to bring the title to the ring with him, instead of the briefcase that most G1 winners carry until Wrestle Kingdom in January.

Earlier this week at the post-G1 Climax press conference, Okada spoke about wanting to do this:

“The IWGP Heavyweight Championship that Ibushi retired though — I’m not saying that people should call me the ‘X-ieth Heavyweight Champion’ or anything, but I want to hold that belt, until Ibushi gets back,” Okada said. “Usually [the G1 winner] gets a contract and defends that. But maybe I can — in fact, since the chairman is here today, I’m asking to have the fourth IWGP Heavyweight belt in place of a contract. Is that OK, chairman? 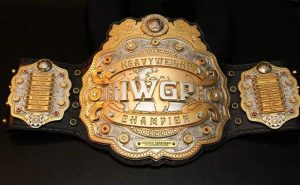 “There’s usually a briefcase with a contract inside. But after the way things ended yesterday, I want to face Ibushi again. And since Ibushi retired that title, I want it as proof of my promise to him. To have a title belt instead of a contract.”

Okada is set to face Tama Tonga at Power Struggle on November 6 in his first defense of his title shot in January.

It’s interesting to note Okada now has a title with him as Shingo Takagi is obviously the current IWGP World Heavyweight Champion. Will Ospreay has also said he’s still the real champion as he never lost it, but rather had to relinquish it due to a neck injury.

At that recent press conference it looks like NJPW will have at least two “heavyweight” champions (emphasis added). 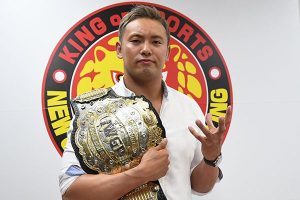 [Sugabayashi:] –So to clarify, you would like to forego the current system of holding a right to challenge contract and instead carry the fourth championship belt, assuming the same level of stakes and risks that the IWGP World Heavyweight Champion has.

Okada: That’s right. Until I get to face Ibushi again, and I don’t know where or when that will be, but if I have this belt, I plan to keep it until then.

That said, I believe with the revival of the IWGP Heavyweight Championship there are five not four singles male championships at NJPW.

What is going on with NJPW?