Here was the AEW Full Gear 2021 full card including the championship matches.

Here’s AEW’s recap of the title match plus all of the matches.

Page blistered the chest of the champion with knife-edged chops. Callis grabbed Page’s boot from outside and Omega took advantage. Omega kicked Page but Page pulled himself over the top rope and down onto the champ!

Omega targeted the spine of Page, but Page reversed a suplex outside the ring. Page connected with a big-time cross body press onto Omega for a near fall. Omega thumbed Page in the eyes.

“Omega is someone who has cardio for days,” said Excalibur.

Page regrouped and hammered Omega with heavy shots. Kenny took down the challenger with a hurracanrana, sending Page to the floor. Omega crashed onto Page with the Terminator dive! Page blocked a moonsault from Omega by raising his knees. ‘Hangman’ tossed Omega with the fallaway slam! Omega rolled out of the ring and Page wasted no time with a tope suicida! Page didn’t give Omega any time to rest, hitting a moonsault from the ring post onto Omega!

“Man, this match is everything I thought it might be and more,” said Jim Ross.

Omega began to bite at the laceration on Adam Page’s head. Kenny climbed to the top turnbuckle but Page shoved him and then began to bite on Kenny’s head! Page sent Omega flying to the mat with an avalanche blockbuster for a near fall!

Don Callis jumped into the ring with the AEW World title but Hangman ducked the belt shot! Page had Omega in his clutches when ref Aubrey Edwards sprinted down. Omega kicked out at the two-count!

Omega was knocked on his knees after V-Triggers. Omega went for another V-Trigger but Page caught Omega with the rolling elbow strike!

Kenny Omega hit Page with Kawada kicks! Page flipped off Omega and turned Omega inside out with a lariat!

The Dark Order walked out onto the ramp to applaud the new champ! Page invited them into the ring and gave them a group hug!

He also a challenger from the AEW Eliminator tournament. 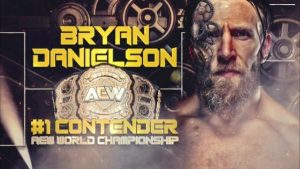 Bryan Danielson vs. Adam Page. Face vs. face or will one turn heel? Will Kenny Omega get a rematch with Page first? Stay tuned.

It’s also a PPV that saw a surprise “…Is All Elite” debut. So, what did you think of the event?

Here’s how the reigns of the first three AEW World Champions shook out.

How long will Page reign?