LOS ANGELES 11/18/2021 — In celebration of Top Cow Productions/Image Comics’ 30th anniversary, Cyberforce is being collected in a special action-packed 664 page hardcover collection of the original stories that launched the Top Cow Universe.

The original Cyberforce run features the work of legendary creators Marc Silvestri, Jim Lee, Todd McFarlane, Walter Simonson, David Finch, Joe Chiodo, Scott Williams, Brian Haberlin, Joe Benitez and Michael Turner which has not been reprinted in any format since 1994. Top Cow is inviting fans to take part in the excitement and push how far the campaigns exclusives can be go via Kickstarter stretch goals.

“It’s wonderful, surreal, and a bit crazy that we’re celebrating 30 years since Cyberforce first burst on the comic scene! The Cyberforce Complete Collection is a love letter to the ’90s and to all the talented creators and amazing fans that made the whole Cyberforceadventure possible. Take a peek and check out our Kickstarter campaign and please join us in celebrating the big, BIG fun that was the ’90s. And thank you all so much because without your support none of this would have happened!”

“The 664 page hardcover is a nostalgic masterpiece in itself, but the Todd McFarlane and Stjepan Sejic prints, the 30th anniversary commemorative edition…along with all the other rewards make this one a HUGE celebration!” said Top Cow President Matt Hawkins. “Thirty years is a milestone for any project or company and we look forward to thirty more.” 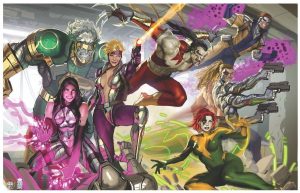 This Kickstarter will just be one of many unprecedented and revolutionary projects that Top Cow will launch to celebrate the 30th Anniversary of Top Cow and Image Comics as they “bring back the ’90s”! Fans should take this once in a lifetime opportunity to participate in Cyberforce Complete Collection Vol. 1 Kickstarter and stay tuned for more news coming soon.

Cyberforce is about a group of cybernetically enhanced resistance fighters on the run from the monolithic multi-national conglomerate CYBERDATA that created them. All the big action, larger-than-life characters you loved return in this gorgeously rendered and assembled first volume of Cyberforce absolute collected editions!

So, will you contribute to this effort or just pick it up when it lands in stores?