Arrow Video is giving us a trip back to the ’80s with two titles that take you deep into the art house and the indie videostore. Lies & Deceit: Five Films by Claude Chabrol gives us a taste of one of the original French New Wave directors. Claude Chabrol was the first of the critics at Cahiers du cinéma to actually make a feature film. His Le Beau Serge came out in 1958. Even though Charbrol was extremely prolific making nearly a film a year until his death in 2010, the filmmaker gets overshadowed by his fellow critics turned filmmakers Jean-Luc Godard and François Truffaut when world cinema instructors babble about the French New Wave. This boxset will make up for a bit of the oversights you might have experienced in international cinema class with five of his films from the ’80s and early ’90s including his art house hit adaptation of Madame Bovary with Isabella Huppert as the literary character.

Deadly Games was a film that most viewers found tucked on the horror shelves at their local videoshop. This is the classic tale of a cursed board game. The big draw was Steve Railsback in the cast. He was great in The Stunt Man with Peter O’Toole although most of us knew him from being Charles Manson in Helter Skelter. Deadly Games came out in the early ’80s, but fell into obscurity during the arrival of the DVD. Now they’ve found the original camera negative to give new life to film. You’ll be able to see all the dice rolls in high resolution. 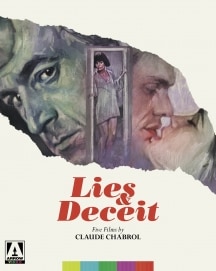 Too often overlooked and undervalued, Claude Chabrol was the first of the Cahiers du Cinema critics to release a feature film and would be among the most prolific. The sneaky anarchist of the French New Wave, he embraced genre as a means off lifting the lid on human nature. Nothing is sacred and nothing is certain in the films of Claude Chabrol. Anything can be corrupted, and usually will be. Arrow Video is proud to present Lies & deceit: Five Films by Claude Chabrol. Featuring Cop Au Vin (Poulet au vinaigre), Inspector Lavardin, Madame Bovary, Betty and Torment (L’enfer), this inaugural collection of Claude Chabrol on Blu-ray brings together a wealth of passionate contributors and archival extras to shed fresh light on the films and the filmmaker. Dark, witty, ruthless, mischievous: if you’ve never seen Chabrol before, you’re in for a treat. If you have, they’ve never looked better.

ONLY HE WILL HEAR YOU SCREAM. 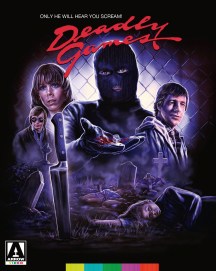 Steve Railsback (famed for his unhinged performance as Charles Manson in 1976’s TV mini-series Helter Skelter) is at his sinister best as a troubled Vietnam Vet in 1982’s Deadly Games – a tale of madness, murder and adultery from writer/director Scott Mansfied. A masked maniac with a penchant for a horror-themed board game is playing his own twisted game with the women of a small American town. Each time the dice is rolled, another victim meets a grisly end. Returning home to mourn the death of her murdered sister, Keegan (Jo Ann Harris) befriends local cop Roger and oddball cinema projectionist Billy (Railsback) – but soon finds herself in the killer’s sights. Originally entitled Who Fell Asleep, Deadly Games is an intriguing early ’80s slasher oddity which benefits from focusing as much on the development of its female-led cast as it does on its scenes of stalking and slashing. Available for the first time ever on disc, Arrow Video is proud to present this long-overlooked creepy gem in a brand new restoration from the recently-unearthed camera negative!