The former ROH talent, indy wrestling and internet darling has been signed by AEW. 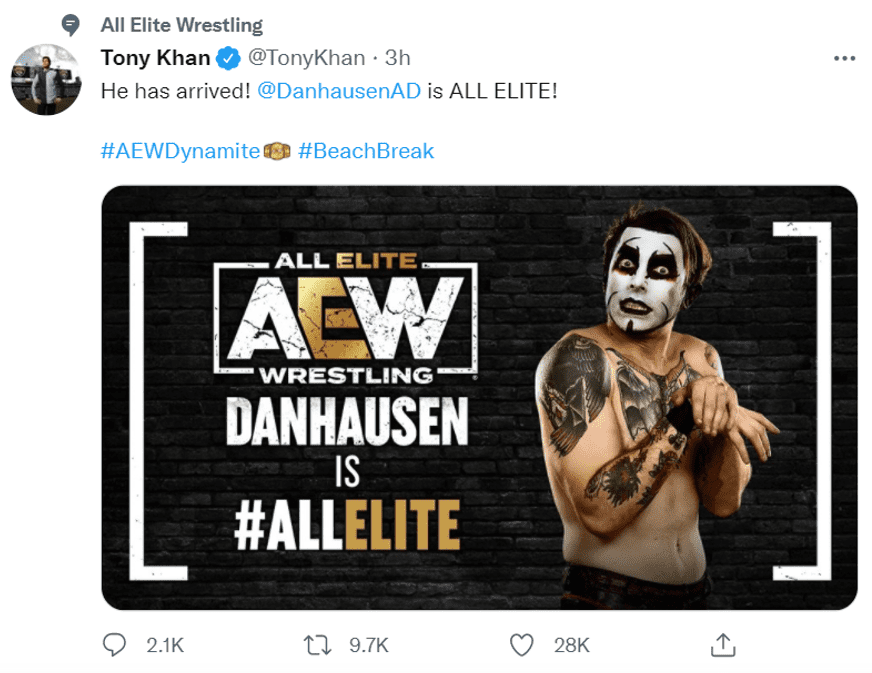 He also appeared at AEW Dynamite Beach Break 2022 as reported by the company (emphasis added).

Adam Cole and Orange Cassidy traded right hand shots in the center of the ring, both men staggered!

On the outside of the ring, Orange rattled Adam Cole with a shotgun dropkick! Cole whipped Orange Cassidy into the steel barricade and then dropped Orange spine-first across the rail!

Cole tried to pull a steel chair from underneath the ring but Danhausen was holding it!

“Orange Cassidy is just as perplexed as Adam Cole, but either way it allowed Cassidy to gain the upper hand,” said Excalibur.

Cole pump kicked Cassidy in the face! Cole tried for the Panama Sunrise but Orange countered by slammed Cole through the timekeeper’s table! Orange attempted the Orange Punch but Cole blocked it with the ring bell! Cole pulled plunder out from beneath the ring and chucked it into the ring.

Adam Cole set up two steel chairs in the ring. Orange planted Cole through the chairs with a Michinoku Driver! Cole motioned to the ramp for help. Brandon Cutler came out but Wheeler Yuta blasted him. Bobby Fish wiped out Wheeler! Chuck Taylor came out but The Young Bucks superkicked him! Trent and Rocky Romero brawled with the Bucks!

Orange walloped Adam Cole with the Beach Break! Adam Cole tried for a low blow on Orange but it didn’t bother Orange because he was wearing a steel cup to protect himself!

Orange Cole punished Cole with a Panama Sunrise for a near fall! Orange wrapped his fist in a steel chain and was setting up for the Orange Punch but Adam Cole retreated! Orange followed Cole backstage but Cole smashed Orange through a table for a near fall!

“This battle raging all over the arena here in Cleveland,” said Excalibur.

Cole blasted Orange with a superkick! Cole pulled down the kneepad and was about to lower the boom but Orange countered with a thrust kick! Orange was going for the Orange Punch but Cole wiped out Orange by blocking the punch with a lighting fixture!

This is such evil and nice news.