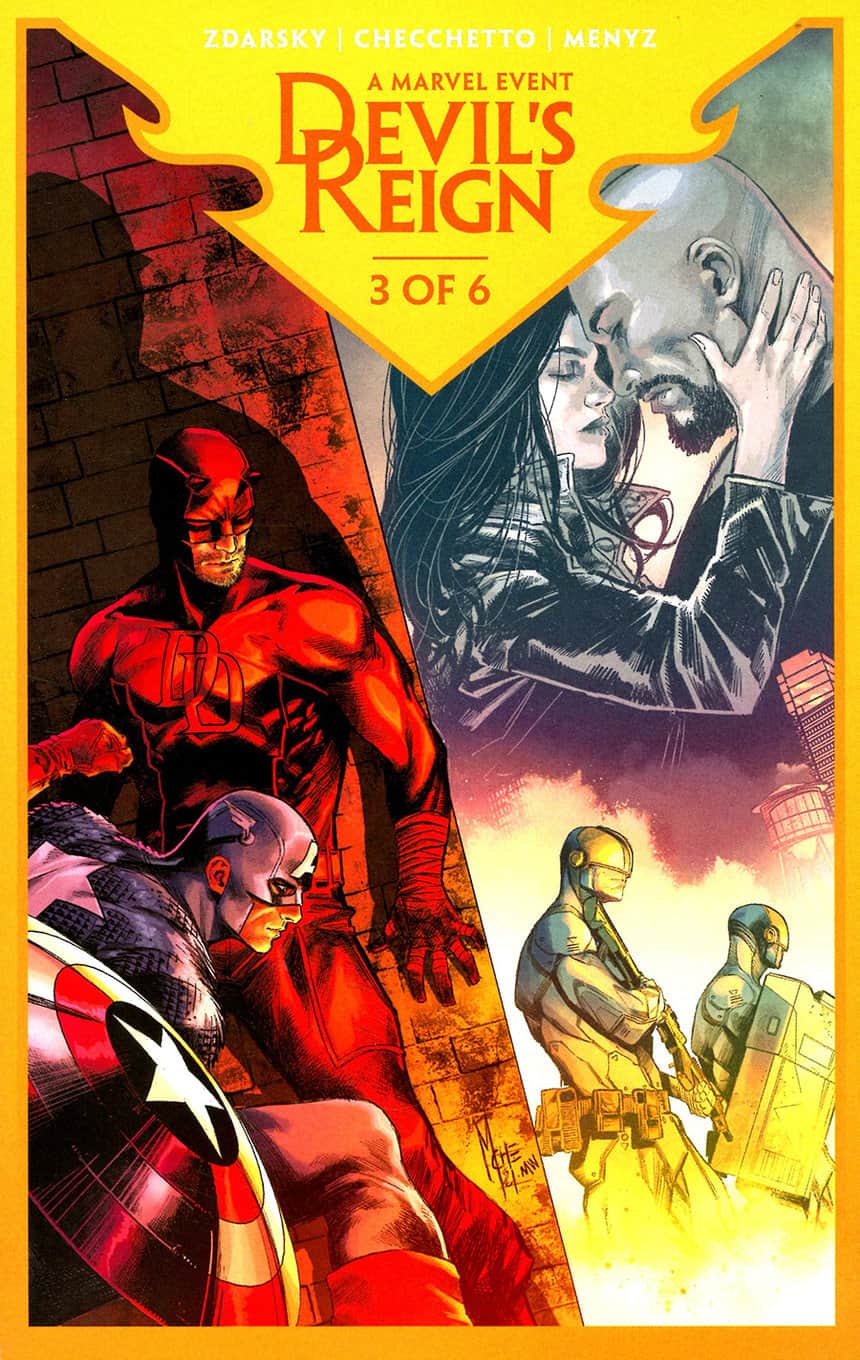 The book has a few variant covers below in addition to the main cover above. 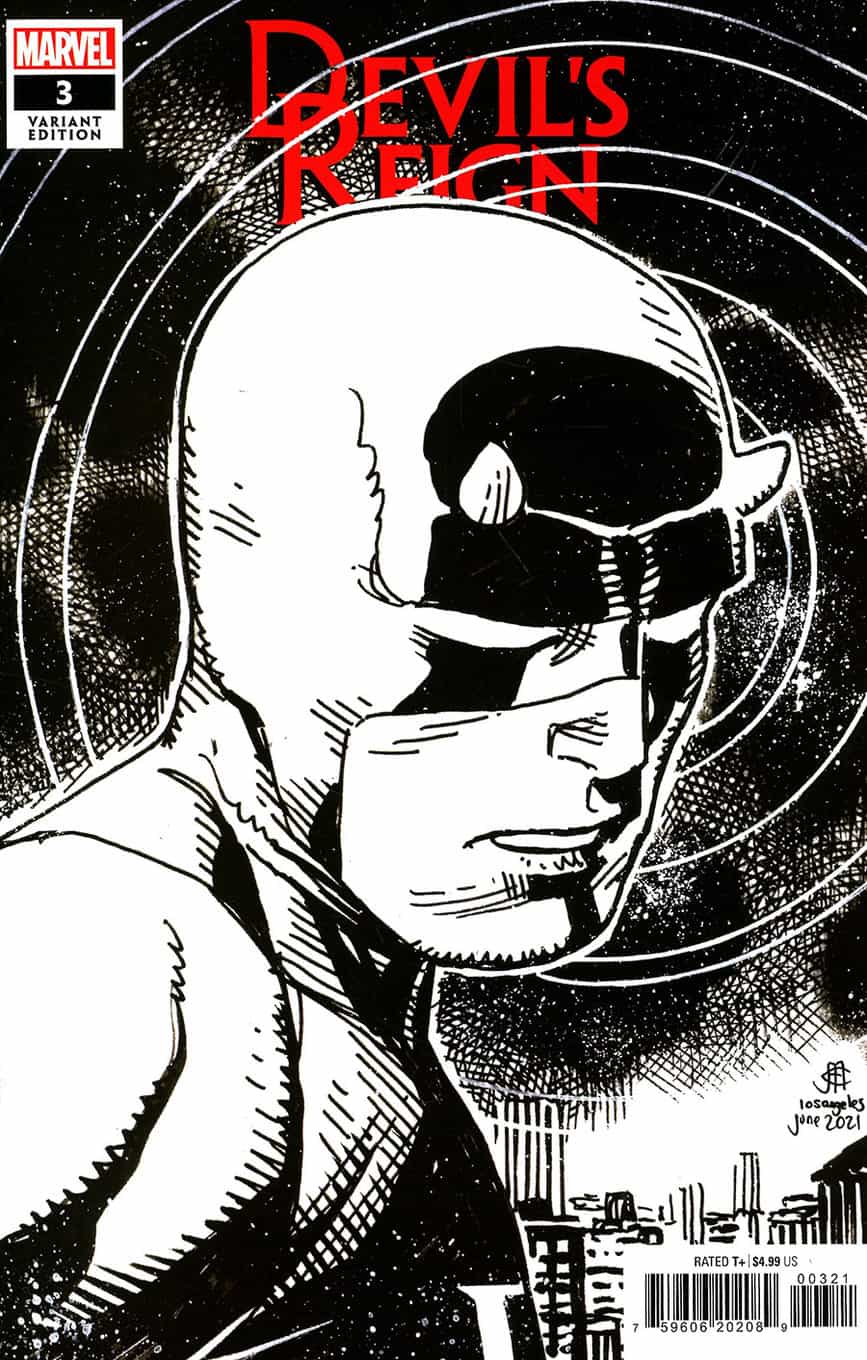 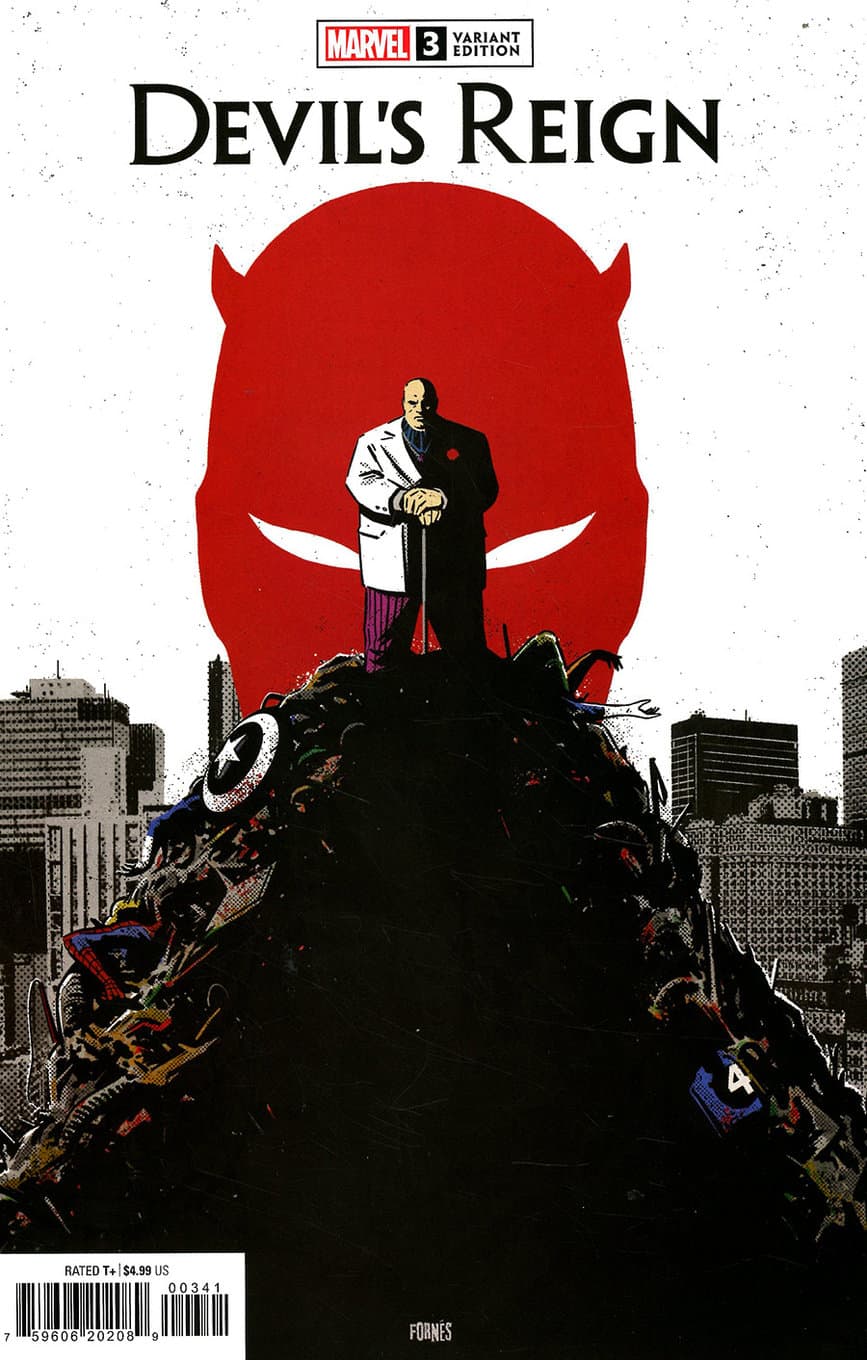 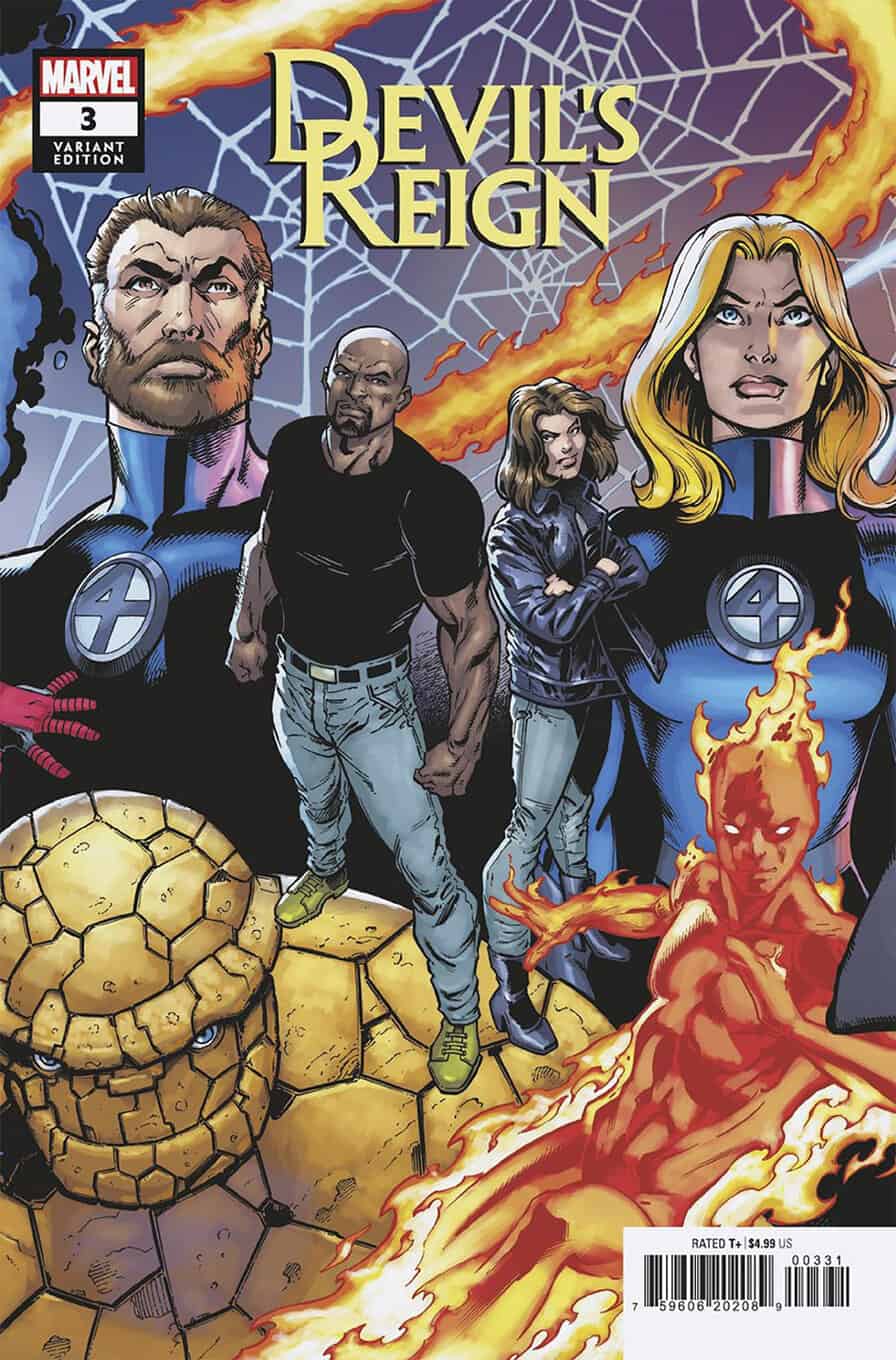 That last variant covers connects to form a larger image with all six issues of Devil’s Reign.

The promise of this issue can be derived from its solicitation.

New York City stands at the brink of disaster as MAYOR WILSON FISK has at last reached a breaking point, with an army of super villains at his back, and a deputized crew of super villainous THUNDERBOLTS on the streets and in every police station. Worse still, he’s put the Marvel Universe’s most powerful tools into (all six) hands of one of its most diabolical minds, unaware of the disaster that could befall the entire city as a result!
As a gauntlet of super villains stand between Captain America, Iron Man, Spider-Man and Daredevil and liberating the heroes who have been captured by Fisk’s law enforcement, they’re ALL about to learn that the danger is closer than they ever thought possible. Civilians, heroes, even children – NO ONE is safe from the Kingpin’s wrath. 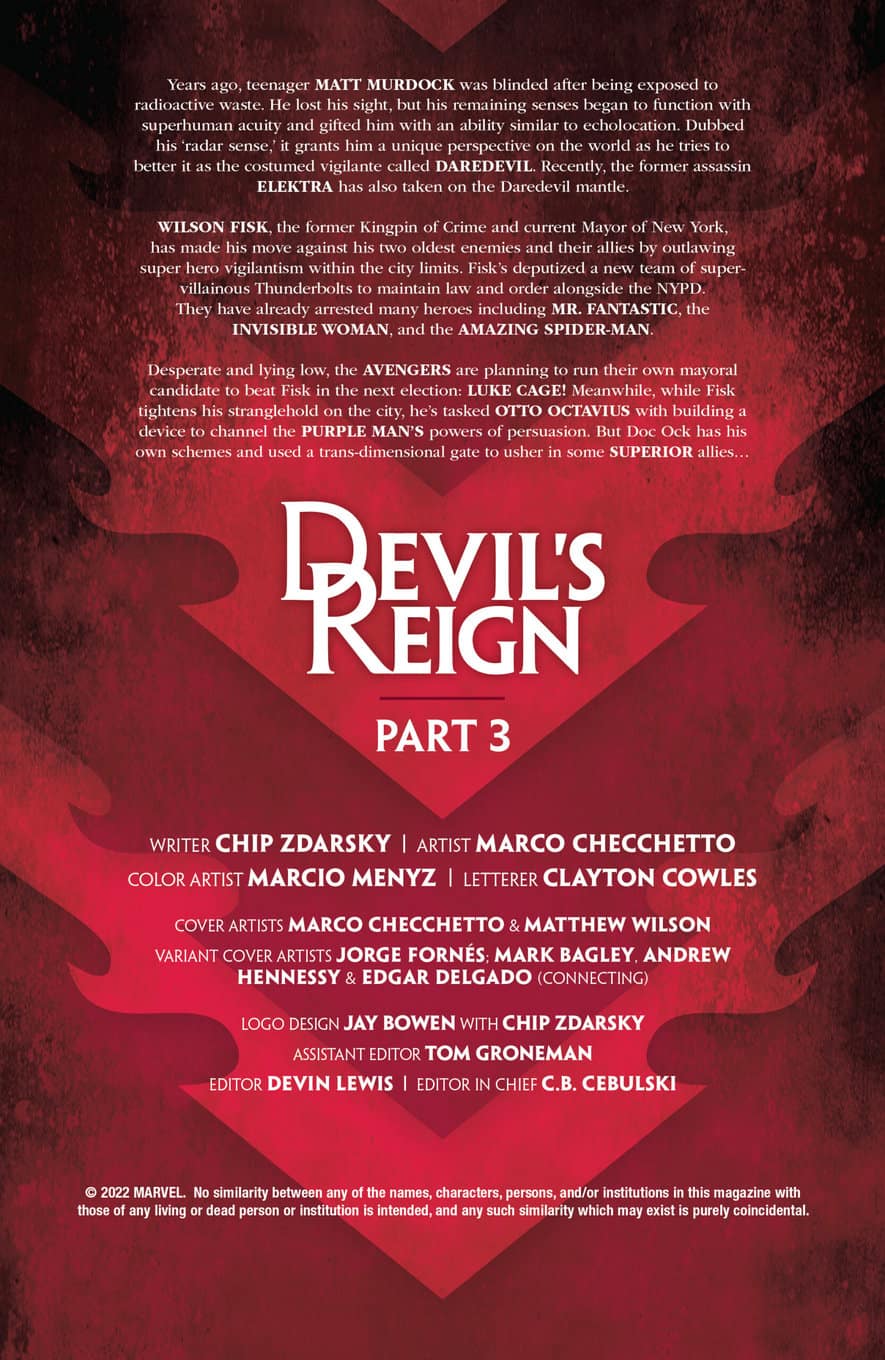 I think before we start,  I think readers may benefit from a classic Official Handbook of the Marvel Universe bio for the Purple Man; he can effectively control people. 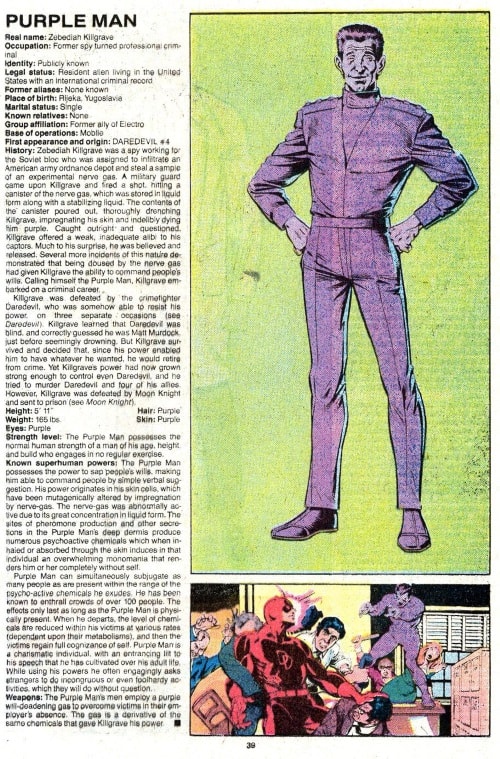 The book opens with 1/2 of the Fantastic Four saving a bloody Ben Reilly Spider-Man from the police; he is so badly disfigured the police couldn’t ID him even without a mask. 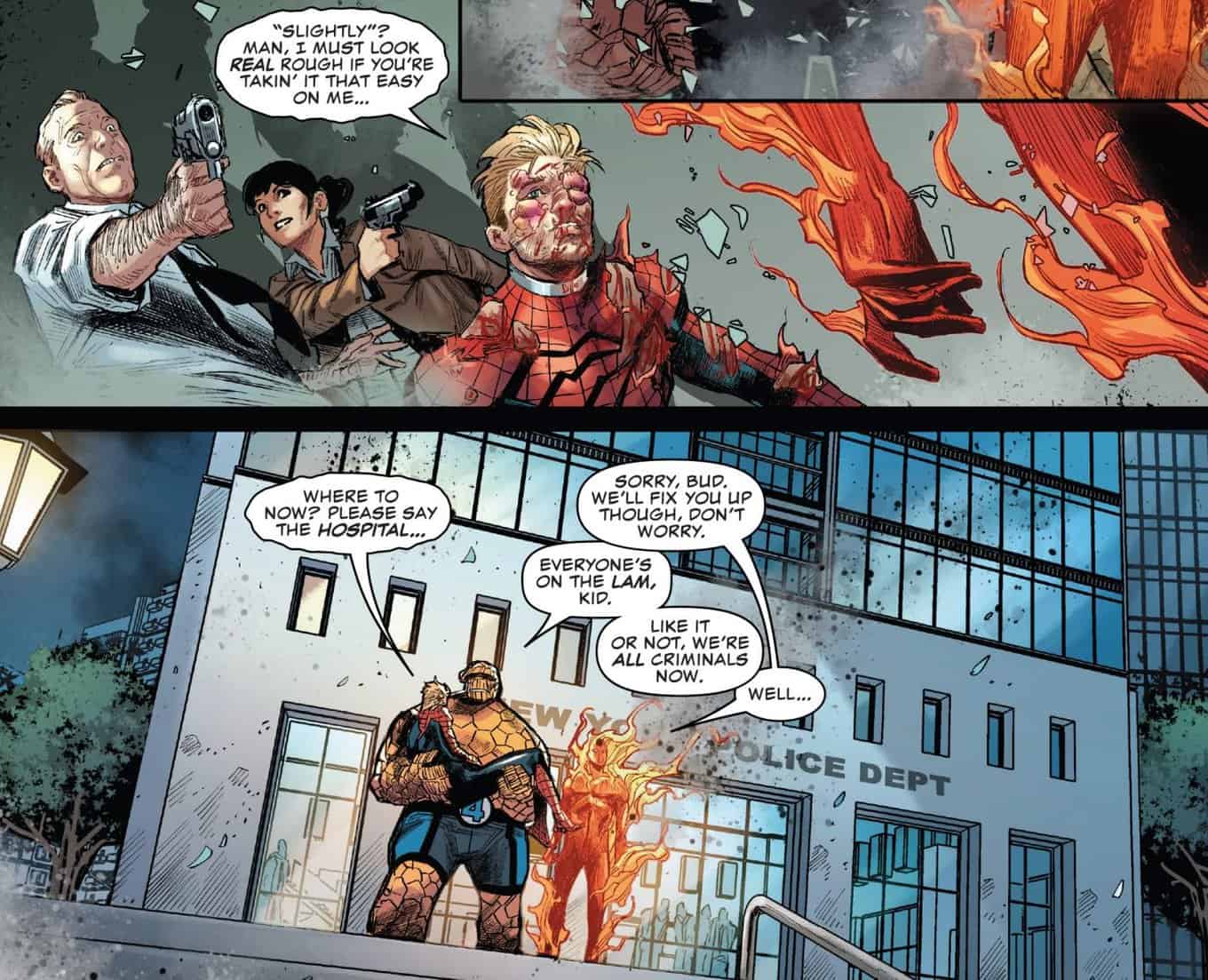 Next, the Kingpin Wilson Fisk also the Mayor of NYC kibitzes with his captive the Purple Man and… 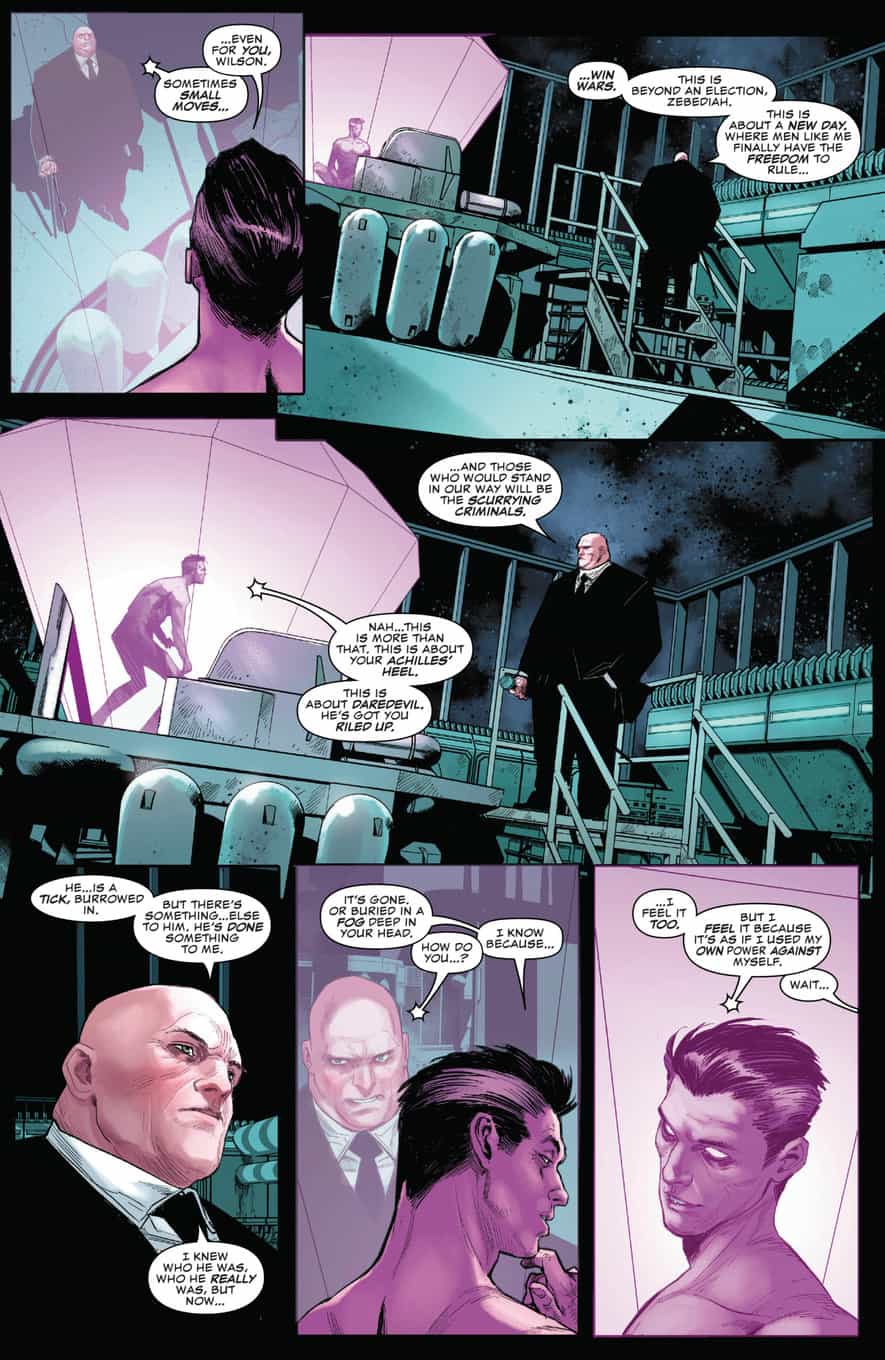 …the discover the Peuple Man’s kids have played with their minds; in Kingpin’s case he no longer remembers who is under the Daredevil mask.

Our heroes also realize the Purple Man has a role in having the people side with the Kingpin and his war on capes and cowls. 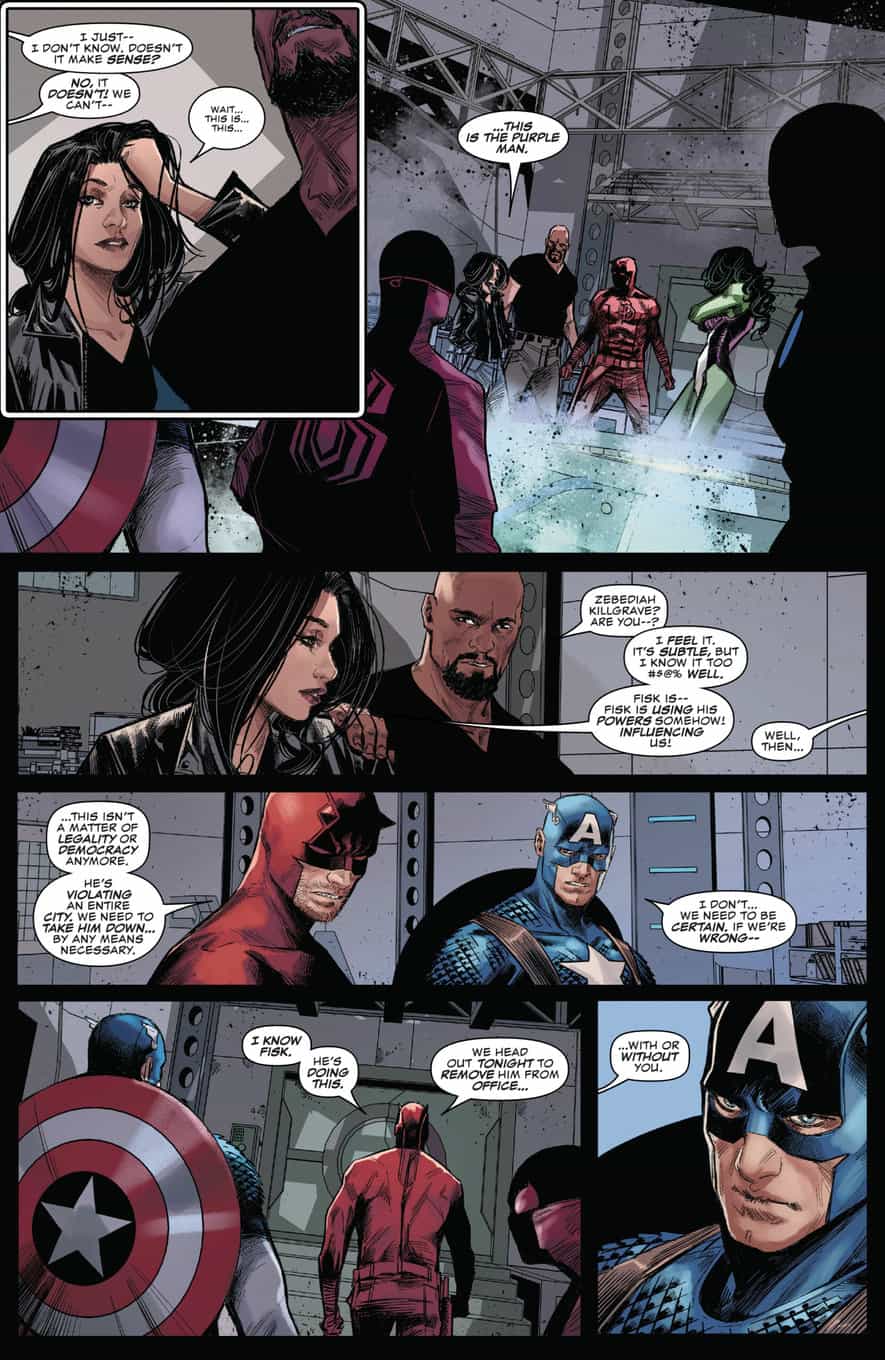 Elsewhere, we see the Purple Man’s kids and… 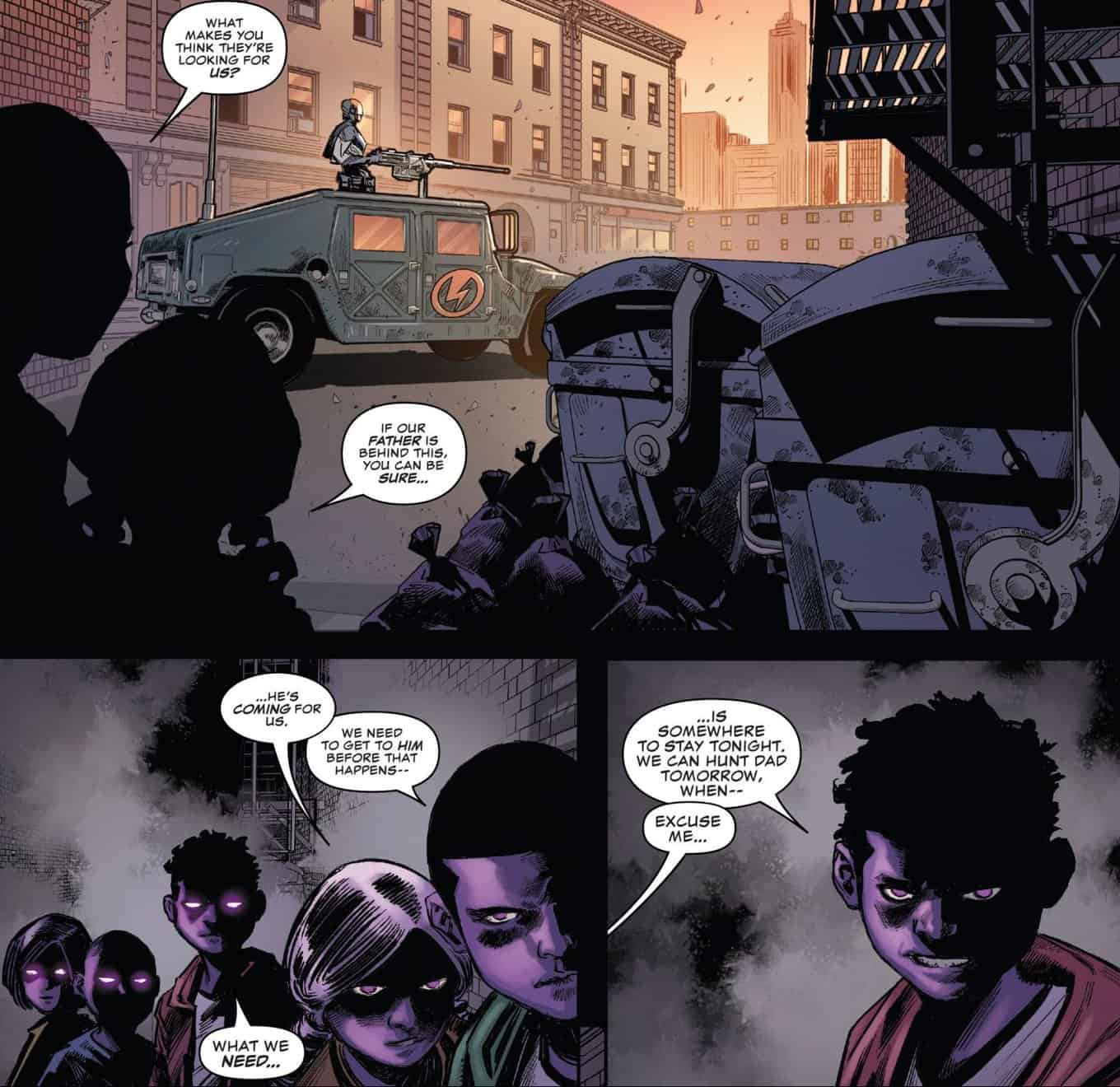 …while we see flashes of reasonableness, their ultimate mission is to kill their dad. 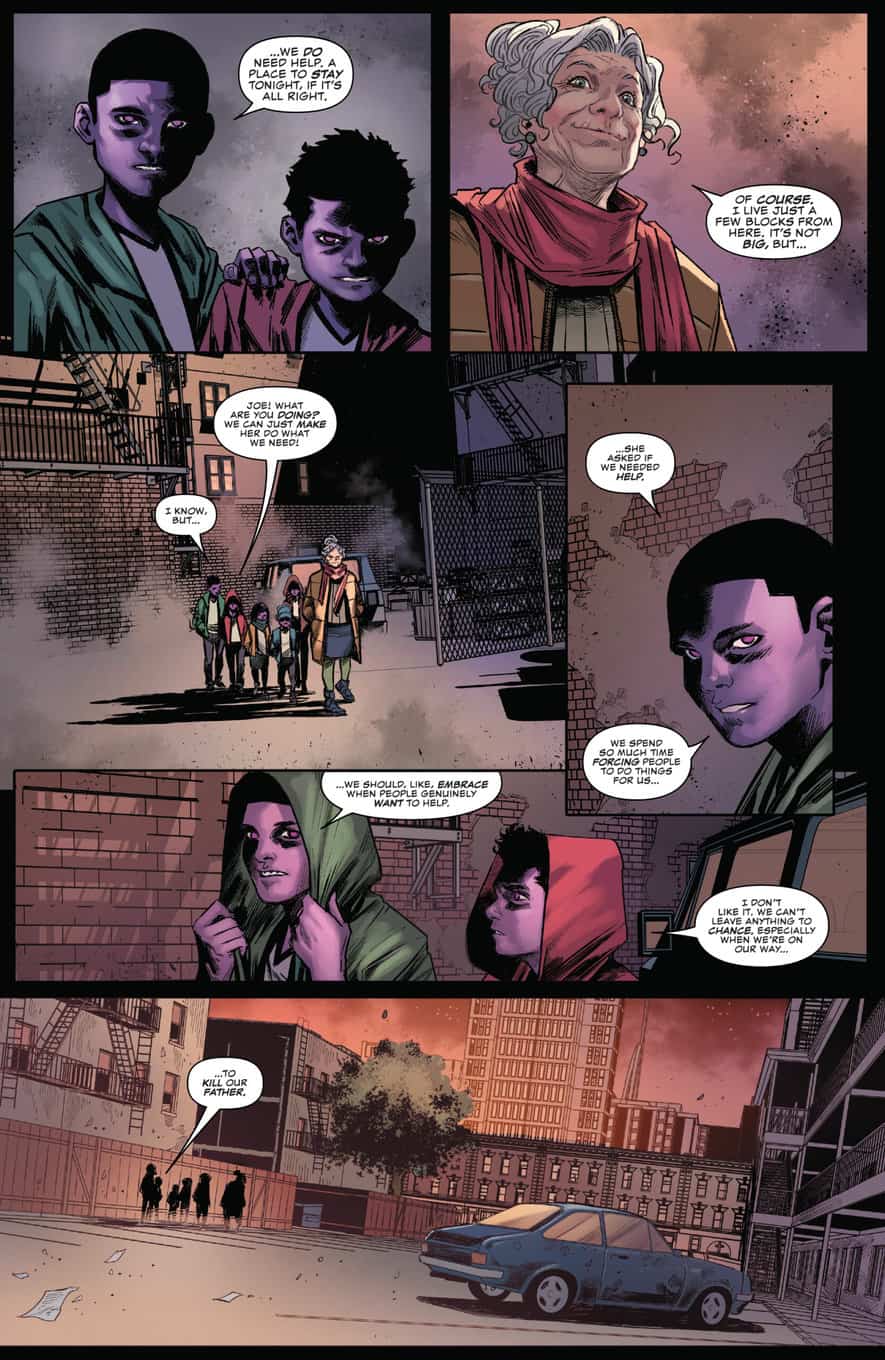 Our heroes go to city hall to confront the Purple Man and they in turn are confronted by Doctor Octopus and his Superior multiversal colleagues. 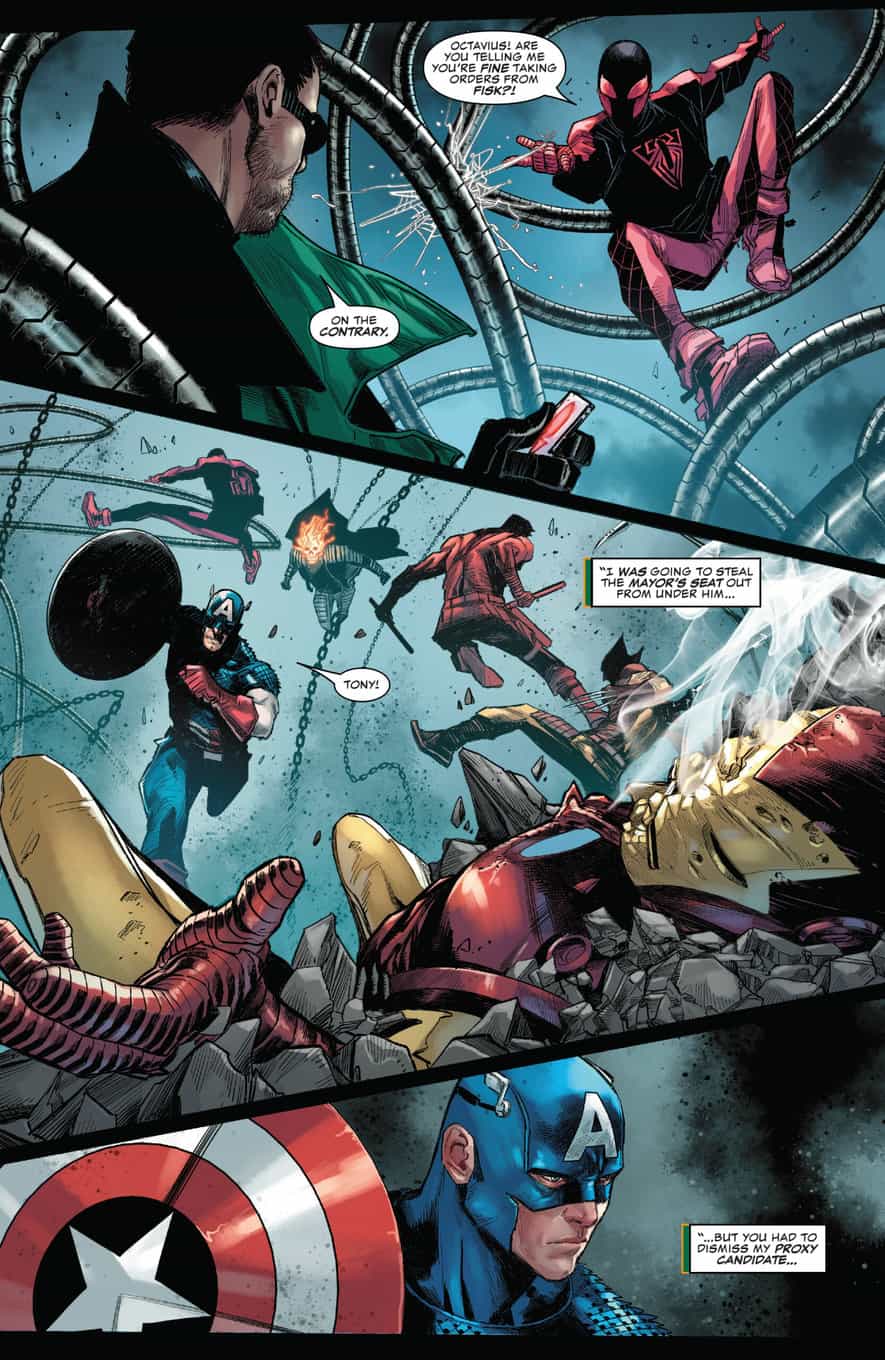 There is also a mole in their midst as Iron Man was actual the Chameleon?! 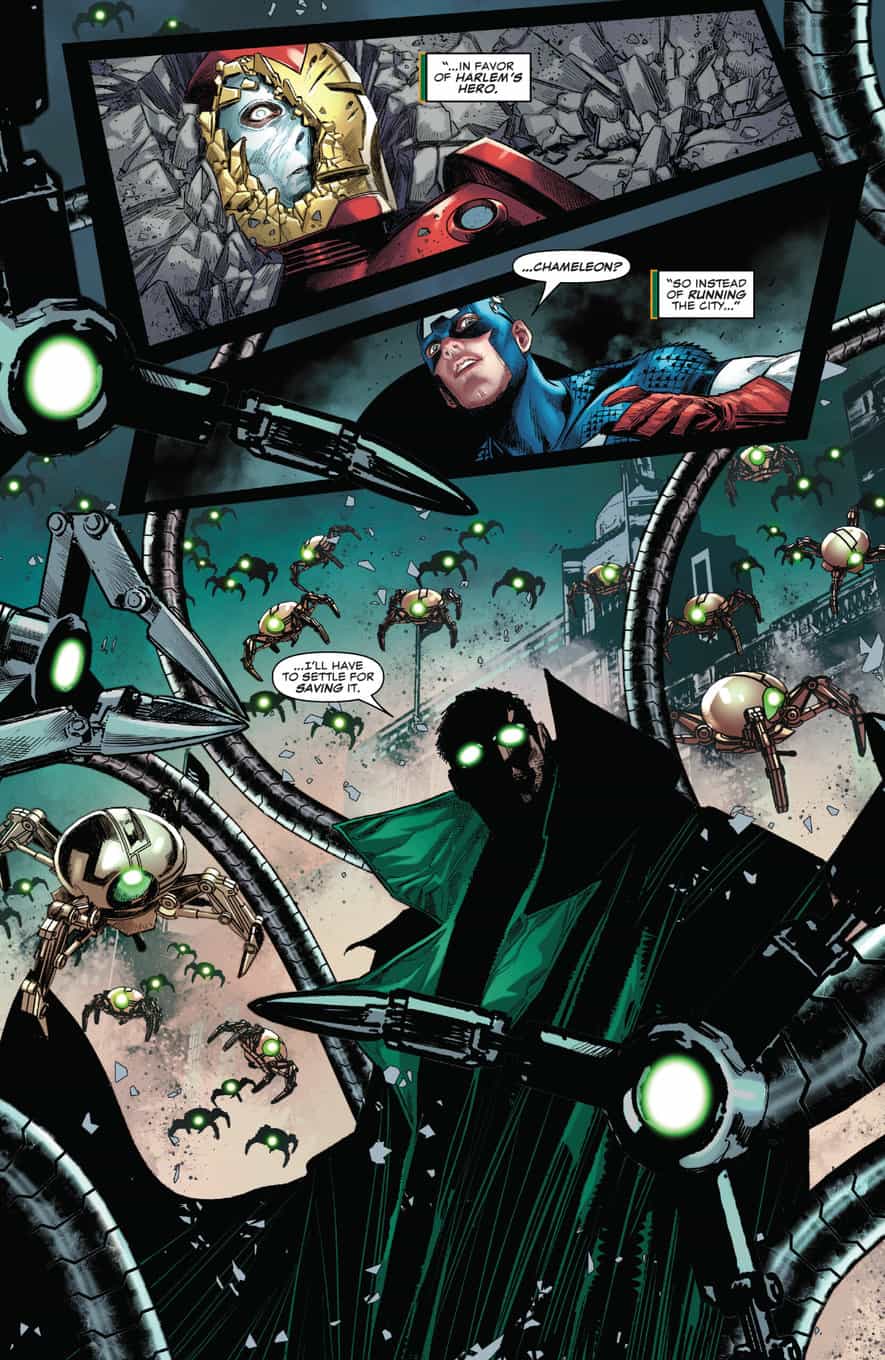 The heroes are losing badly to the forces protecting City Hall and retreat. 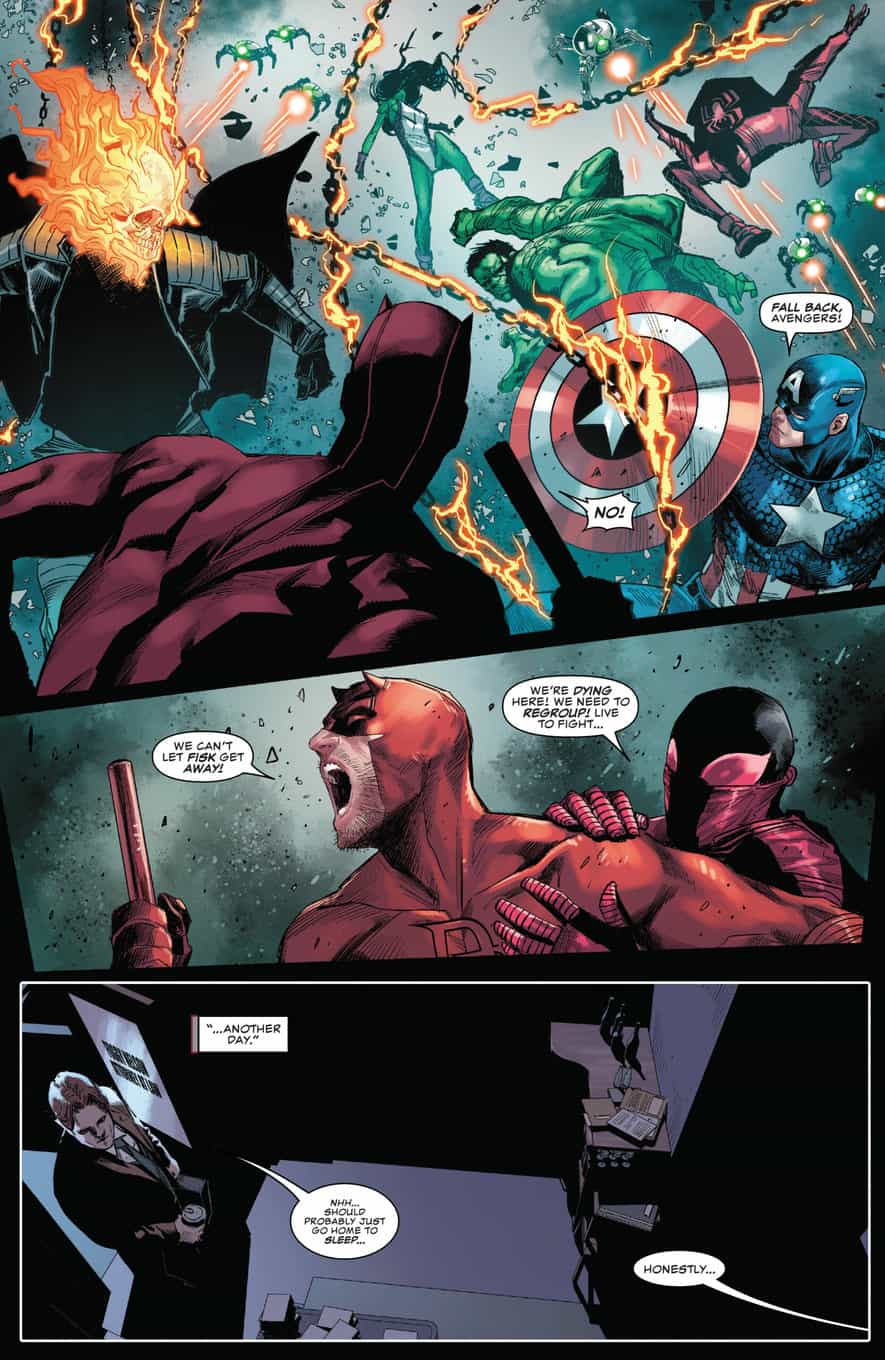 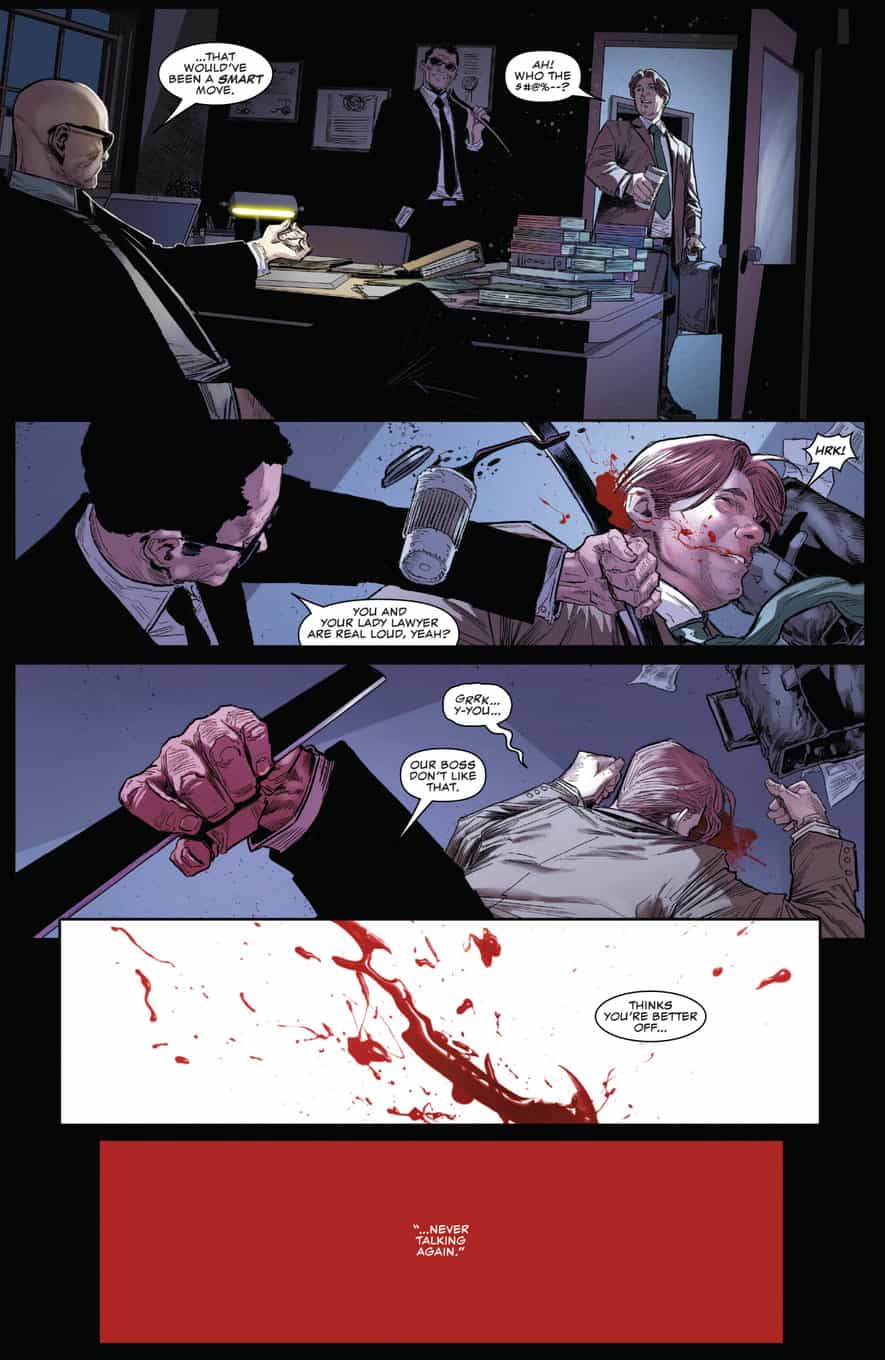 Grounded action and political intrigue. I didn’t know much about Purple Man before this series, but he and his family are interesting. The Art was the strength of the issue. 7 out of 10.