Marvel also plans to unleash Star Wars Tales: Krrsantan#1, a collection of the deadly Wookiee bounty hunter’s most memorable comics exploits. The special one-shot collects Star Wars (2015) #14-15 and #20, as well as Star Wars: Doctor Aphra Annual#1, which includes Krrsantan’s rumble with Obi-Wan Kenobi set between Episodes III and IV, his epic clash with fellow Wookiee warrior Chewbacca, and finally, a look into the blaster-for-hire’s Trandoshan gladiator-pit origins and subsequent quest for revenge. For those looking to learn more about this fearsome fighter after his appearance in The Book of Boba Fett, you’ve found your bounty. 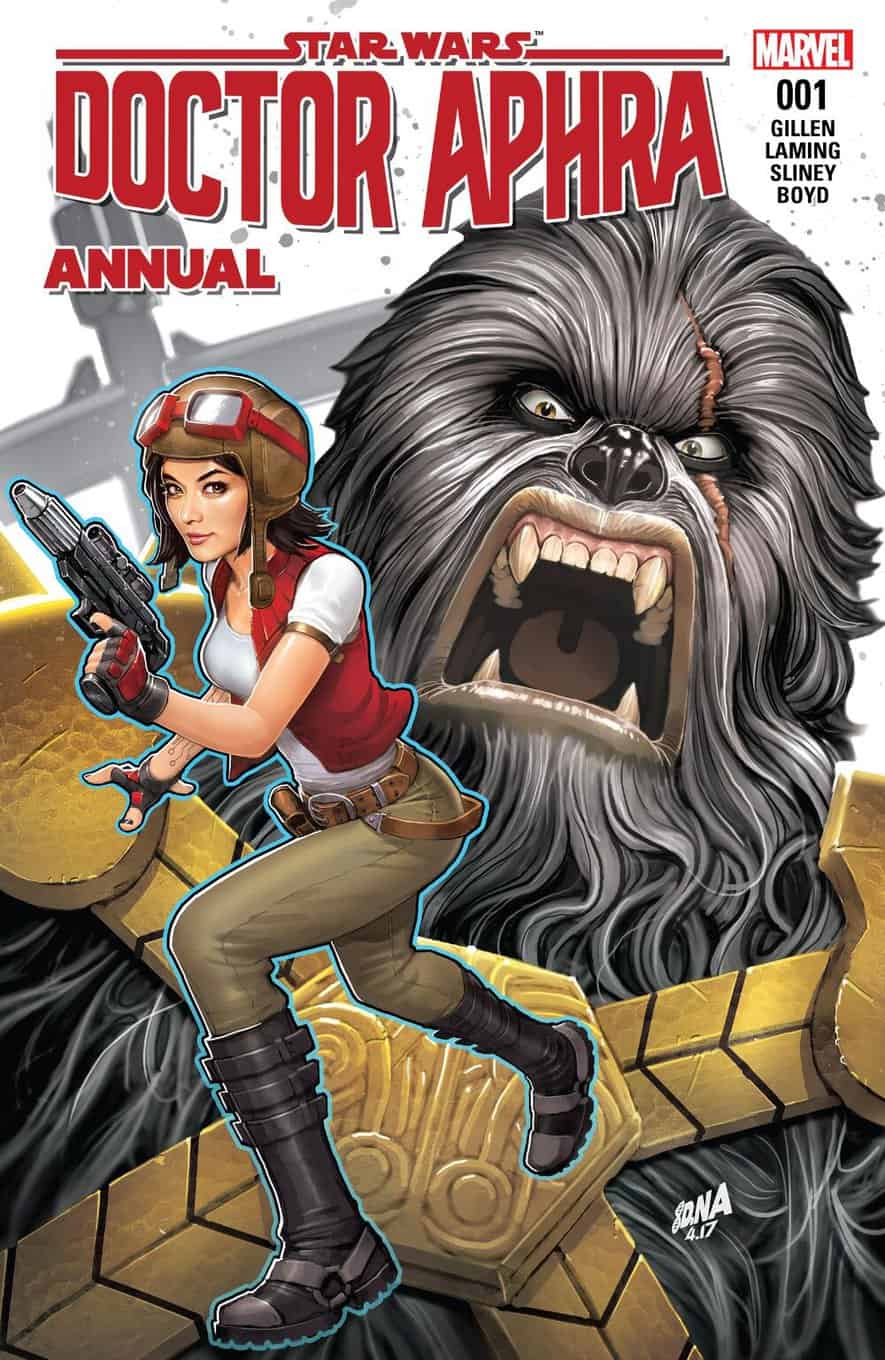 Star Wars: The Book of Boba Fett ends this week, on Disney Plus, with its seventh and final episode of Season 1 which is expected to include Black Krrsantan, but they dropped the “Black” part of his new in the streaming show.

The Wookiee Jedi is a relatively new character having debuted just over a year ago in the High Republic series of Young Adult Star Wars novels. He currently appears in the comic book series Star Wars Galactic Starcruiser: Halcyon Legacy that kicked off with its debut issue last week. 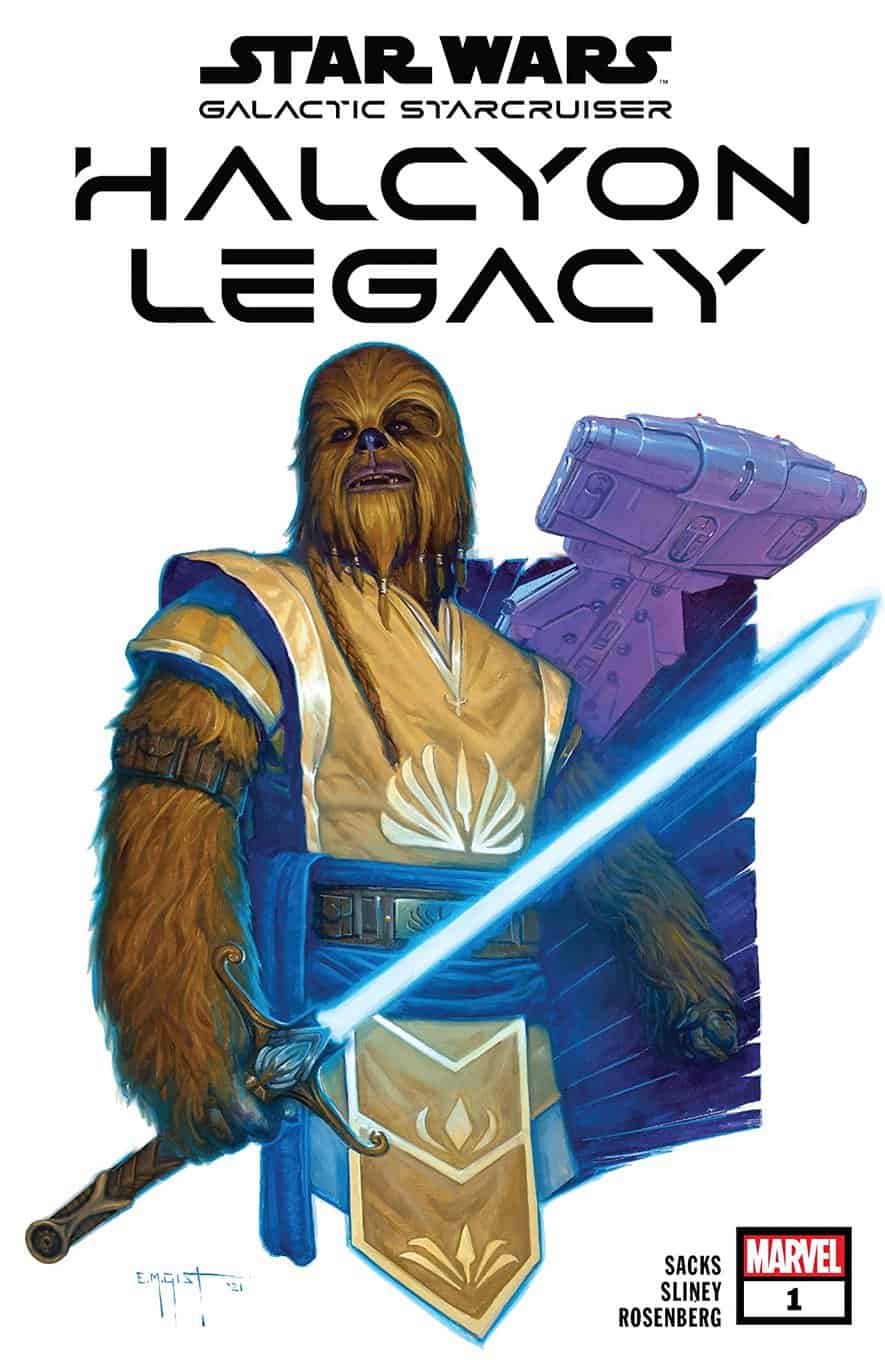 Here’s the solicitation for that book.

THE VOYAGES OF THE GREATEST OF ALL-STAR CRUISERS!

As the legendary HALCYON embarks on a momentous…cruise, the ship heads toward a confrontation with THE FIRST ORDER!

But what secret from THE HIGH REPUBLIC ERA can help the passengers and crew all these years later?

And how did JEDI NIBS and BURRY fend off a NIHIL attack on one of the ship’s first ever voyages?

We chronicled Black Krrsantan’s extensive comic book presence here, but the above appears to be BBB first on-panel comic book appearance after his voice was said to have appeared in September 2021’s Star Wars: The High Republic #9.

It should be noted that the OG Wookiee Chewbacca returns to comics in March 2022 to headline a new ongoing series with his buddy Hans Solo. Solicitation and cover below. 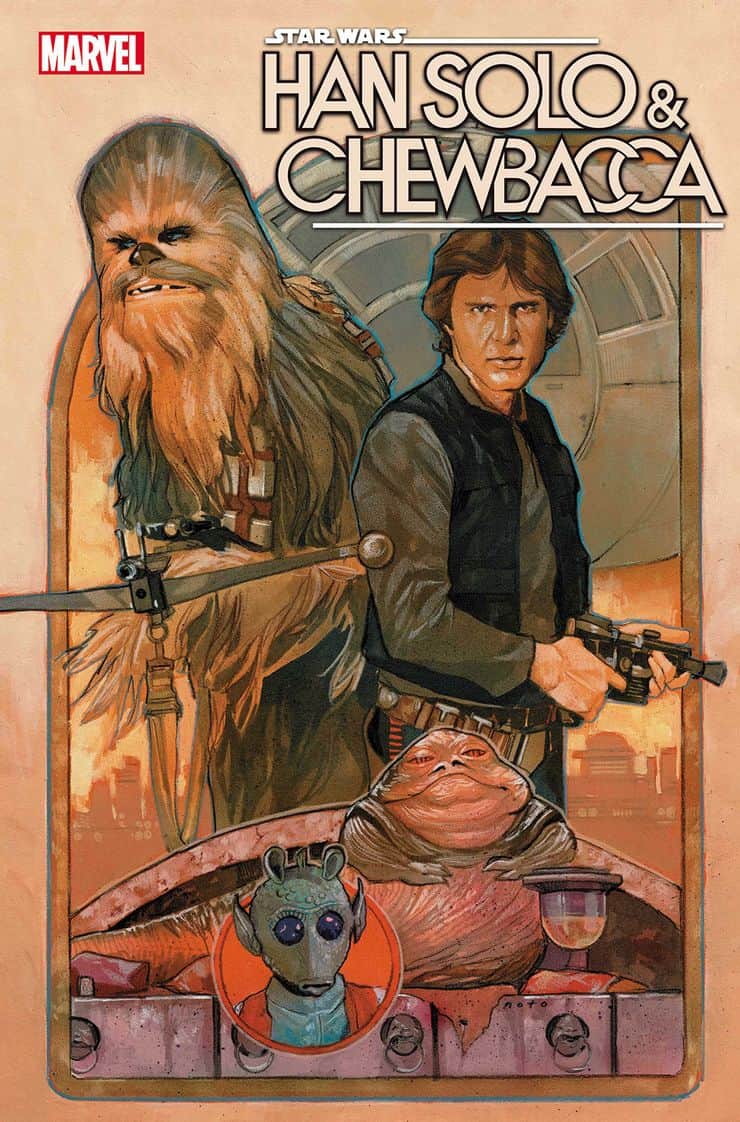 But wait! Isn’t HAN still frozen in Carbonite? Yes. But you can’t keep a good smuggler down. Set a few years before Episode IV: A New Hope, Han, his partner, CHEWBACCA and GREEDO, embark on a heist for JABBA THE HUTT. It’s supposed to be an easy job. What could possibly go wrong? Well, for starters, how about a reunion with the very last person Han expected to see? The last page is a jaw-dropper…

Curious as to the further Wookiee love Star Wars on Disney Plus and the comics at Marvel will give fans.

Mystery Science Theater 3000 celebrates Halloween on the Gizmoplex in 3-D!