Team Impact Loses A Star & Gains Another In Battle At No Surrender 2022 Against ROH’s Team Honor No More!

Team Impact Loses A Star and Gains Another In Battle At No Surrender 2022 Against ROH’s Team Honor No More! 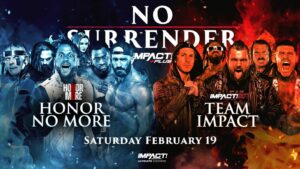 Ever since their shocking arrival at Hard To Kill, the renegade group from ROH, now known as Honor No More, have been running roughshod over IMPACT Wrestling. Following a series of heinous assaults, the IMPACT roster is banding together to defend their home turf. When Honor No More showed up on IMPACT! in Fort Lauderdale with all but a promise to cause more chaos, the battle lines were drawn by IMPACT Executive Vice President Scott D’Amore. At No Surrender, Mike Bennett, Matt Taven, Vincent, PCO and Honor No More’s newest member, Kenny King, will go to war with Team IMPACT, comprised of Eddie Edwards, Rich Swann, Chris Sabin, Rhino and now – after Josh Alexander was sent home by D’Amore – Steve Maclin, in a match where the stakes are higher than ever. If Honor No More wins, they are allowed to stay in IMPACT Wrestling – but if they lose, they must leave for good!

The stars of IMPACT will show No Surrender, LIVE February 19th from the Alario Center in New Orleans, LA, streaming on IMPACT Plus and YouTube for IMPACT Ultimate Insiders! Tickets are on-sale now at Eventbrite.com.

The No Surrender PPV airs on Saturday February 19, 2022 with the full card here.