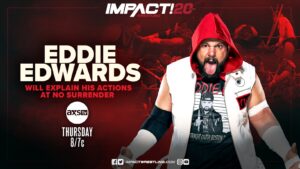 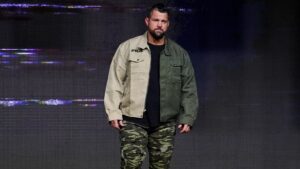 The war between Honor No More and IMPACT Wrestling is far from over and it continues in tonight’s six-man tag team main event! PCO confronts Sabin at ringside, allowing Bennett to capitalize off the distraction and toss him into the unforgiving steel guardrail. King pummels Sabin with repeated strikes as Honor No More cuts off the ring. Sabin uses his quickness to avoid Bennett and sends him crashing into his own partner. Sabin makes the tag to Swann who goes on the attack. Swann and Mack hits a double team flapjack on Taven for two. Mack hits Taven with a Samoan Drop, followed by his signature standing Moonsault. King kicks Swann off the apron, allowing Taven to tag in Bennett, unbeknownst to Mack. Taven and Bennett connect with the Protown Pack on Mack to score another huge victory!

Eddie Edwards Explains His Actions at No Surrender

After the match, Maria Kanellis introduces the man who opened the door for Honor No More, a Triple Crown Champion in both IMPACT Wrestling and Ring of Honor, Eddie Edwards. Scott D’Amore forces the members of Team IMPACT to leave the ringside area while Eddie explains why he betrayed them at No Surrender. Eddie says that despite coming up in the industry with Honor No More and feeling betrayed when ROH announced that they would be taking a hiatus, that is not why he joined them. Eddie reveals that the real reason he joined Honor No More is because they have identified a corruption, a cancerous growth of dishonor in the pro wrestling industry and he wants to expose it. Eddie recalls when IMPACT opened the Forbidden Door two years ago and it resulted in Kenny Omega, someone who didn’t work for IMPACT Wrestling, winning the IMPACT World Title. Eddie says that he waited patiently for his shot to restore honor to this company but management chose the likes of Moose, Sami Callihan and Josh Alexander instead. Alisha Edwards interrupts and confronts Eddie in the ring. Alisha tells her husband that he should be asking IMPACT for forgiveness, questioning the lessons he taught her to always have faith and believe that anything is possible. Eddie calls Honor No More his new family and tells Alisha that if she wants to remain a part of his family, then she has to make a decision. Eddie says that he didn’t turn his back on IMPACT Wrestling, he is simply walking away from the people that have turned their back on him. Eddie leaves the ring alongside Honor No More as Alisha looks on from the ring.

.@MrsAIPAlisha is here and cant believe her husbands actions either! #IMPACTonAXSTV pic.twitter.com/S38a8kuV09

IMPACT! goes off the air.

Looks like these ROH alumni are thriving in Impact.