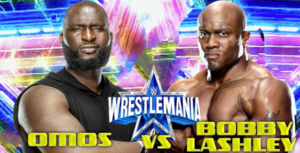 Omos laid down the gauntlet Monday night on Raw, claiming no one could beat him, essentially daring anyone to try.

It appears the big man will have the chance to prove himself at WrestleMania 38 when, according to Sean Ross Sapp of Fightful Select, he squares off against former WWE champion Bobby Lashley.

“The card is subject to change, as do WWEs plans. Fightful has not gained confirmation that Lashley has been cleared,” Sapp noted, but if it is The All Mighty, the booking would seem to indicate a babyface turn for the former champion. At least for one night.

It is difficult to imagine a scenario in which he would not be the babyface, though. Omos has been a definitive heel, the dominant monster who no one can knock off regardless of the situation. Lashley, returning for the first time since Elimination Chamber in Saudi Arabia on February 19, would generate a big reaction.

All of that is fine and well, but the match itself would likely rank as the worst of either night.

Omos is big and physically impressive, but he is far from a good worker, and a power-based Lashley coming off a shoulder injury to work around him is not a recipe for success.

Still, the contest would be accompanied by a hot crowd, ready to see someone slay the giant. And Lashley is more than capable of that.

While Bobby Lashley’s legit injury status is the subject of much debate the Omos match has been gaining steam online, but yet to be formally confirmed.

Valiant Comics & July 2022 Solicitations Spoilers: In The Spirit Of Secret Weapons & Unity, Book Of Shadows Assembles Valiant’s Finest, But Who & Why?!