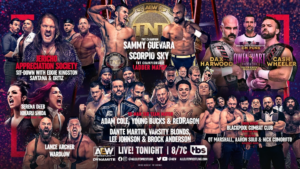 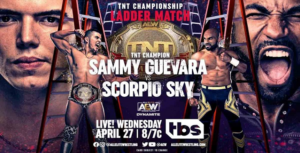 Sammy and Sky began brawling outside the ring. Scorpio whipped Sammy into the guardrails twice! Sky followed up with vicious body shots!

“That’s one way you ground a highflyer,” said Jim Ross.

“Scorpio Sky out to a very early advantage,” added Excalibur.

Sky grabbed a ladder from the ramp and carried it back to the ring. Sammy went for a dropkick but Scorpio Sky avoided it. Sammy blocked a suplex attempt from Sky and sent Sky overhead with a German suplex onto the ramp!

Sammy catapulted Scorpio but Scorpio was ready and jumped onto the ladder. Sammy pulled Sky down and then Sammy began to make the climb. Sammy flipped from the top of the ladder and crashed down onto Scorpio Sky below!

“That was a very awful landing for Sammy,” said Excalibur.

Sammy jumped from the turnbuckles over a ladder, but Scorpio Sky countered with the TKO cutter from his own ladder!

“One too many times getting crazy has cost Sammy here,” said Tony Schiavone.

Scorpio Sky pulled out a ladder that was wrapped in barbed wire and placed it in the ring. Sammy used a standing Spanish Fly on Scorpio Sky onto the barbed wire ladder! Dan Lambert was checking on Sky but Sammy pulled him into the ring. Tay Conti entered the ring and kicked Dan Lambert between the legs!

Paige VanZant sprinted to the ring and she teed off on Tay Conti while Scorpio Sky peppered Sammy with punches! As Scorpio and Paige celebrated, Sammy and Tay retaliated with thrust kicks!

Frankie Kazarian walked down to the ring and Scorpio Sky smiled at him, acknowledging he’d be keeping his word and defending against Frankie in the future! 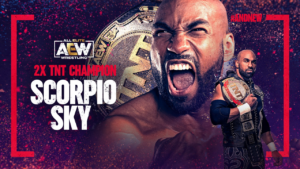